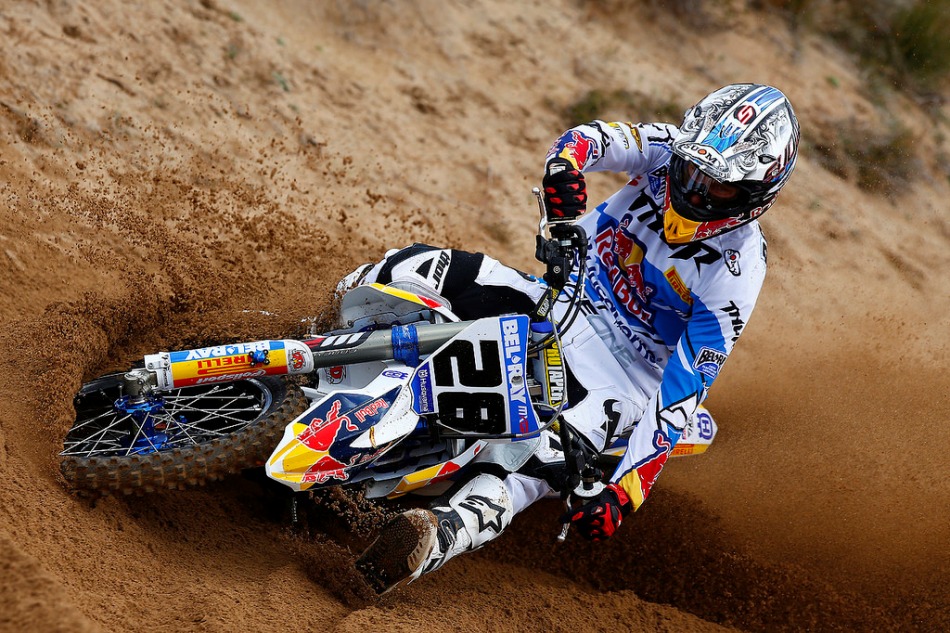 Tyla Rattray is the big question mark of 2014.

Will the 2008 MX2 World champion be able to comeback and challenge Cairoli for the title or has his five year stint in America taken the edge off his speed?

Rattray was a title contender during his years in the US 250 outdoor championship, finishing second in both 2010 and 2011, but injuries (2009) or untimely crashes ultimately ruled Rattray out of having a shot coming into the final round.

However his 450 outdoor seasons were offset by injuries or a lack of bike set up coming in from supercross. Rattray never seems to get his flow consisently last season. His confidence also clearly not where it used to be.

Rattray did show glimpese of speed with a podium at High Point last season and ending the year with fifth overall. Bit it was a stop start season that Rattray just couldn’t really show his best form.

With no decent 450 deal on the horizon in the US, Rattray found his himself back on a factory team the GPs. A brand new factory Husqvarna to be exact.

But as they are owned by KTM and the bikes closely resemble the Austran manufacturer for whom Rattray won his MX2 world title, it seems a pretty good fit.

Rattray also had a full off-season to prepare for motocross, something he didn’t have in America with Supercross taking priority.Tyla also knows the GP tracks, he knows what it takes and how to get in shape for the season. He also kept Aldon Baker as his trainer for 2014.

However prior to the pre-season races Rattray did an interview with On Track Off Road’s Adam Wheeler in which he confirmed that he saw himself as a main challenger to Cairoli’s crown. But, worringly he also stated that in MXGP the top five where good but after that the level of rider dropped off.

As well as annoying his rivals, it seems Rattray may have severly underestimated the depth and quality of the MXGP field.  Searle, Van Horebeek, Bobryshev, Simpson and Nagl finished sixth through tenth in the championship last year so for them to read that their level isn’t close to the top five, has to be motivating!

Rattary mentioned it had been a long time since he had raced anything so rough. Even on the hard pack Rattray hasn’t been setting the world alight but is he playing it smart and just setting up the bike in preparation for a long season?

Despite a couple of races Rattray has left us with more questions that answers.

Rattray has a lot of questions to answer, possibly even in his own mind after the Italian races. He will want to find some confidence before the first GP and show everyone he still has the stuff to challenge Cairoli in GPs.

Remember Tommy Searle was just 18 when he challenged a 23 year-old Rattray to that 2008 title, ( he won five overalls to Rattray’s four). Both went to America but Searle came home after two seasons. It will interesting to see if Searle got faster  by coming back to GPs earlier or if Tyla got faster staying in the USA longer.

But after five years in a America, has Rattray underestimated GPs?  Does he have that 2008 speed in his locker to battle Cairoli again or has the series moved on without him? Have the new generation of riders like Gautier Paulin, Steven Frossard and Clement Desalle moved a step ahead of the tough, gritty South African?

We are about to find out.