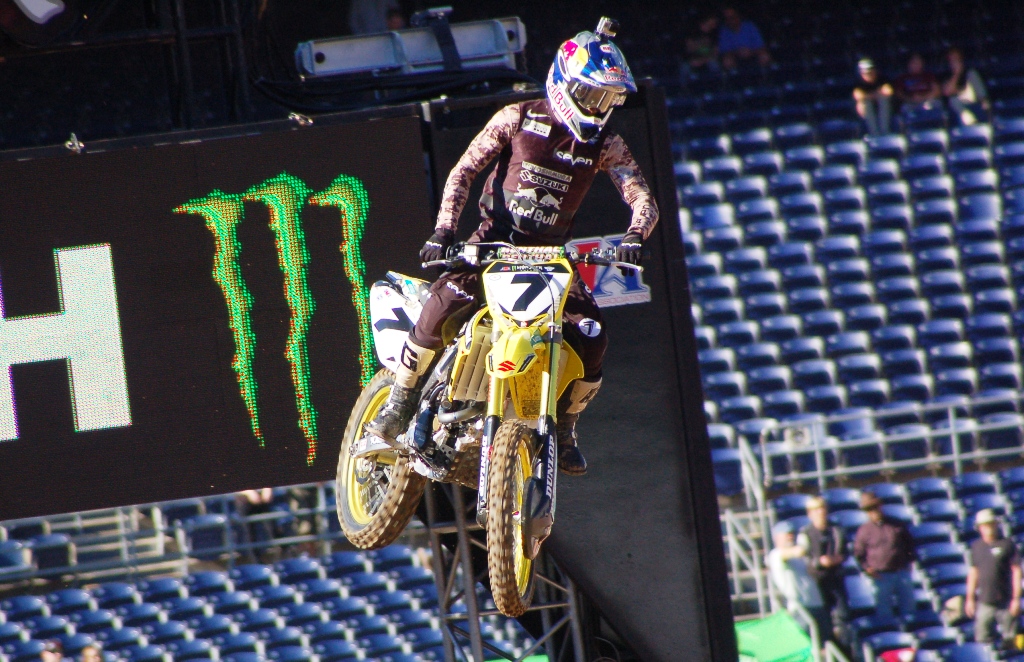 How quickly things can change in supercross!

One week earlier Chad Reed and Dean Wilson were in title contention after winning their respective races. By the end of the night at San Diego both looked to be out of contention.

Dean Wilson looked like he had the win in the bag, but a crash and bike damage now has him 33 points off in the championship. Dean’s frustration was evident as he shook his head in the air after the crash. He knew that was the moment that might mean he will never win a 250 supercross title.

Seeing Chad Reed crash at the stadium was hard to watch especially when he didn’t move. For a split second I thought that might be the end of his career. Fortunately the injuries aren’t that bad and, after a stern text from his wife, Reed is unbelievably going to try to race this weekend. If Chad pulls this title off it might be the most impressive in history. But he is going to be in so much pain on Saturday it is hard to see how he can complete 20 laps.

With Reed crashing it almost stole the thunder from James Stewart as I am sure some people in the stands were so busy watching Reed they missed Stewart cross the line! Stewart was fast and classy all day, he passed RV on the first lap and held him off the whole way. It was impressive and the whole team and family were pumped because it meant both boys were on the podium as well as James finally getting the monkey off his back and getting a win.

It was a case of woulda, coulda, shoulda for Ken Roczen. The German was looking superb in qualifying, he was so smooth and flowing and it looked like it was coming easy to him. When Ken won his heat going away from Barcia and RV, he looked to be the favourite for the main. But a bad start and trying to get passed Reed cost Roczen time to Stewart and Villopoto. Then, once he got in second, he made three mistakes in one lap that just destroyed his momentum. He held on for third despite Reed and Dungey catching him at the end. Indeed Roczen was lucky not to go down after the collision with Reed.

Ryan Villopoto is doing what he needs to do but it isn’t in the way we are used to seeing. For the past two weekend Villopoto holeshot but got passed straight away and couldn’t hold onto the leaders for all 20 laps. Villopoto has been vocal about his dislike of slippery tracks and his aggressive style certainly isn’t perfectly suited to such a lack of traction. The problem for everyone else is that he is still nine points ahead going into his favoured East coast tracks! RV is playing it smart.

The big mystery of the series is Justin Barcia. The Honda rider was the favourite to challenge RV for the title in some people’s eyes but he hasn’t even been close.  Despite beating Villopoto in the heat race it looked like Justin was giving it his all to hold Villopoto off as opposed to being able to pull away. He also had to watch rival Roczen disappear into the distance. In the main Barcia was on Dungey but again it went wrong when he fell. Once back on board Barcia got caught by Tomac and passed by privateer, Weston Peick.

Barcia is being paid a lot of money by Honda to be 37 points back and in seventh in the championship. This is not what Barcia or Honda expected. Something isn’t right and they need to figure it out quickly.

The strange thing about San Diego was the size of the stadium and the size of the track. The stadium was huge, with a bigger floor space than Anaheim yet the track was about 8 seconds shorter.  This meant longer interludes in between races for the fans and left me wondering why the heat races in the 450 class can’t still be eight laps. They have the time to do it and that is how it worked ten years ago when they had semi final races.

The West Coast 250 class is strange to watch, the guys at the front are very fast but the quality of rider drops off quickly after the top ten or so.  When the leaders are lapping up to tenth in a 15 lap race, it’s not good.

Dean Ferris is struggling somewhat. He had a big crash in the whoops during practice and that may have detuned him. While tenth on paper is ok, he is a long way from the front of the pack and isn’t really gaining any ground. If Dean wants to have a long career in America he is going to have to have a massive improvement in his supercross riding next season.  As Roger DeCoster said in our interview, KTM are just waiting for outdoors with Dean. But that means he will have a lot of pressure to produce results, his whole American career could rest on this outdoor season.

Valentin Teillet on the privateer Bud Kawasaki is probably just as fast as Dean but he just keeps crashing. Unfortunately Teillet never really got to show his full potential in the first six rounds, but he loves to whip it for the crowd and did show signs of good speed.

Jason Anderson looks to have the advantage in the 250 title chase. He and Seeley started right with each other on lap one but Anderson made to fourth with Seeley and good way back in fourth by the chequered flag. Seeley said he had a stomach bug but he can’t afford to let Anderson get too far way with only a couple of rounds left.