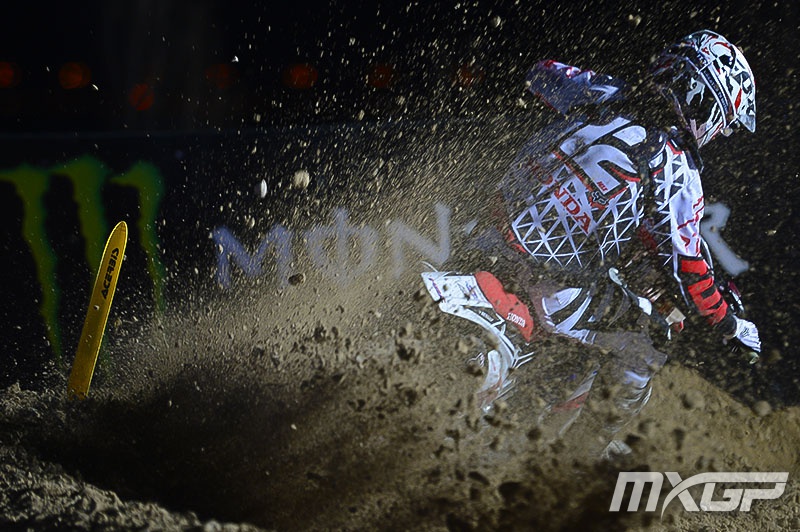 The forgotten man. That’s how it must have felt for Max Nagl in the last couple of seasons.

The former world number two was dropped by KTM just as he came back from injury in 2012 and then a year of injuries and illness ruined his much hyped switch to Honda last year.

Honda Europe’s Roger Harvey gave us an insight into the struggles of 2013 and the changes they made for 2014.

“Last season was pretty much lost due to the early injury then the illness, at the Qatar GP last year I almost had to carry him back to the pit box, this year was a totally different story thankfully.

“We had tests carried out on Max to try and establish the exact problem, originally diagnosed as Epstein Barrs syndrome, but further tests show the illness was a different one all together.”

It looked to many that Nagl’s best years were behind him as Gautier Paulin and Clement Desalle became the main challengers to Antonio Cairoli.

But Nagl didn’t give up and kept fighting. The last two years showed rays of hope at the MXDN. Nagl won the trophy with Germany at Lommel in 2012 then last year he finished fourth in the final moto having led early in front of his home crowd. It was the best ride of the year for Max and no doubt boosted his motivation going into the off-season.

That ride went unnoticed by most though, getting lost in the euphoria of a Belgian win, Roczen winning at home and Cairoli showing why he was the best rider in the world.

The American media were also more concerned with the USA defeat and Ryan Dungey’s disappointing performance and so, generally, Nagl’s ride was overshadowed by much bigger storylines.

This meant that he was off the radar when  it came to 2014, people wondered if he still had the ability to win or if it would be more of the same injuries and illness pushing Nagl down the results sheets.

What many people forgot though is that Max is one determined kid. He rode with a freshly broken collarbone a couple of years ago just so he could ride at his home GP. Before that he had been riding with constant back pain just because he didn’t want to stop racing.

Being a more quiet and reserved rider, Nagl’s toughness and fighting spirit goes largely unnoticed. His shyness may also have prevented him winning a world title in contrast to the out going and self-confident countryman Roczen who came in straight away and won.

Nagl’s struggles and losing his KTM ride however seem to have allowed the German to come out of his shell more. He is never going to be as charasmatic as Roczen but his mentality seems to have changed although we never really got to show it last season.

Nagl seems to believe he is as good as Cairoli now, he isn’t intimidated and is ready to go for this title. Previously content with a solid performance Max seems to expect more of himself now. Winning races seems more of a priority instead of a solid top five.

Another aspect that has helped Nagl’s confidence has to be that the might of HRC and stepped up their support of the team. Whatever Nagl needs for the bike HRC can do it. Having that support must make you feel good and want to reward them for their hard work because they are giving you everything you need to win.

Roger Harvey acknowledges how a good pre-season and HRC’s backing have gone a long way to helping Nagl win again. But nothing is being left to chance with Nagl’s fitness either.

“Max has had a great build up to the season,”explained Roger. “The early season races were undertaken with caution, he didn’t want to encounter the injury he had at the start of last season.

“As the team is now HRC we have done a lot of testing since last October and the early season testing this year has gone pretty well, Max is feeling very comfortable with his bike, we have dialled it in to suit his style and this is what we saw in Qatar. Max is now fully fit and his fitness level is that of an elite athlete which is showing in his riding.

“In order to minimise the risk of an infection Max has flown back to Belgium between Qatar and Thailand, we have taken advice from different sports institutions and they have provided us with a plan of how we can combat the jet lag, Max has followed this plan to the letter.

“Last year he completely missed the Thailand GP, he never even made it to the track so it will be new to him, the track could well suit him so we are hoping for another good performance from him here in Thailand.”

Nagl himself admitted a sense of relief that he is winning again and ackowledges how much of a role the team have played.

“The last win was a long time ago for myself so to win the first race today makes me really happy,” said Nagl. “I’m just so pleased for Roger, my chief mechanic, and the whole team for this win, and it was the perfect way to start the season. I was happy all weekend with my riding, and the bike was always working perfectly.”

Max Nagl is back on form and his smooth mistake free style suited Qatar perfectly. To win from the front and hold Cairoli off also said a lot about the strength of his character.

It will be his first time in Thailand this weekend but with his confidence and starting ability, Nagl will be expecting to run at the front once again.

It remains to be seen if Nagl can keep his form all year and if, when the pressure is on at the end of the year, he can remain mentally strong in a title fight. But, for now, Nagl is showing everyone who counted him out that they were wrong and for that he has to be given a lot of credit.

Welcome back to winner’s circle Max!