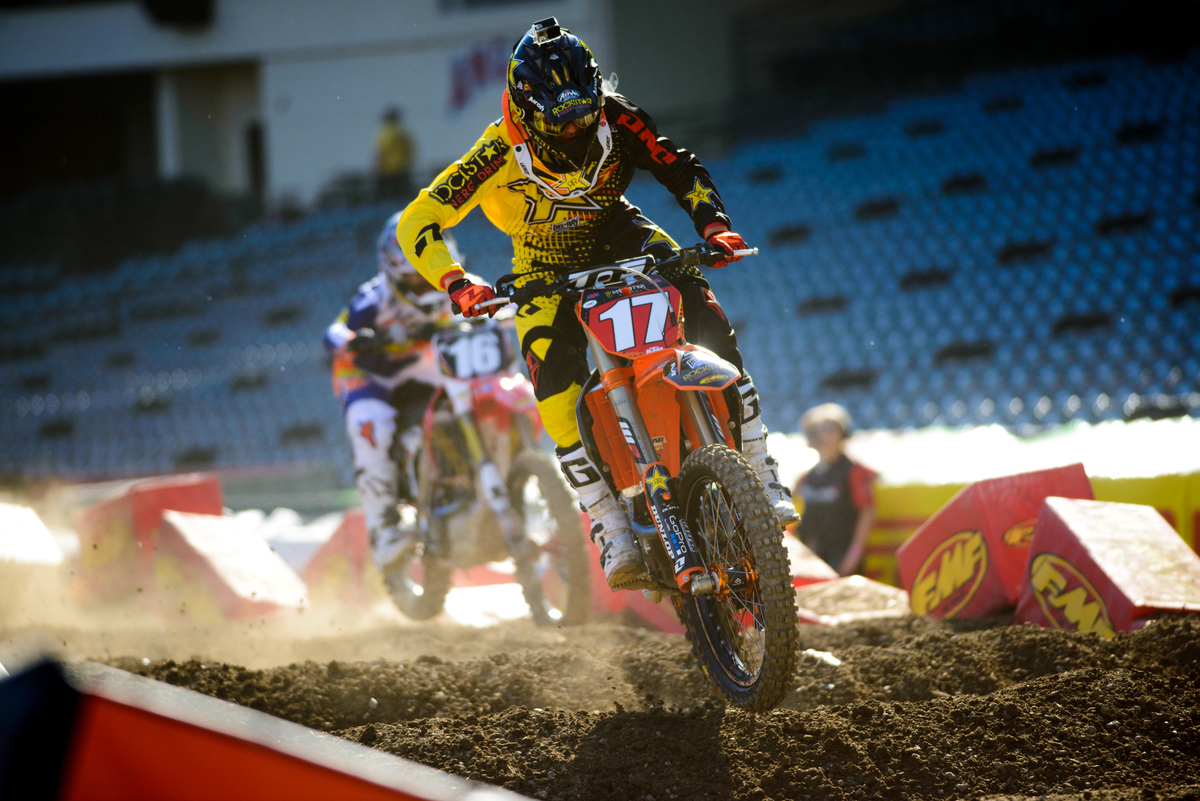 Rockstar KTM’s Jason Anderson officially made himself the man to beat for the 2014 250 West coast series after his Oakland win.

It has been quite a turnaround for the rider who struggled early in his pro career. After the initial hype in 2011, Anderson almost fell off the map in AMA racing at the end of that first season.

Anderson, riding for Rockstar Suzuki, made his debut in the 250 East coast AMA supercross series in 2011. He started well with a seventh but ultimately finished fifteenth overall. He was benched by his team later that season for poor results and a lack of fitness, especially in the outdoors. In short, Anderson wasn’t ready for pro racing.

It was a big learning curve for the then teenager who won the prestigious AMA Horizon award the year before in his final year of Amateur racing.

The award goes to the most promising rider who is expected to make big waves in the pro class and Anderson was hoping to make his presence felt in 2011, but it didn’t happen.

Fortunately Rockstar Suzuki kept Anderson on board for 2012 and he started to get better. He had a high of second place at Salt Lake City en route to eighth overall in the West Coast. It wasn’t quite up to his potential but he did show that he had the talent to be a front runner once he figured it all out.

2013 was another step on the ladder again with the same team. He got his first win at Salt Lake City and a carded fourth place in the series behind Roczen, Tomac and Seeley. But this was the year Anderson showed the consistent speed to make everyone think he could be a title challenger. In fact he could easily been third if he hadn’t had a DNQ at Phoenix.

It is no surprise then that with Roczen and Tomac moving up that Anderson and Seeley have taken over the mantle as the riders to beat in the West Coast.

But this year Anderson has definitely taken it up a notch.  The team switched to KTM and Anderson also knew this was his time.

He made changes in his program, bringing Jeff Ward in as a riding coach and took advantage of the extra support the KTM factory were giving the team as opposed to the minimal support Suzuki were offering the year before.

Anderson has not just expected to win this year he has almost demanded it at times. The way he is riding on the bike looks like he has 110% confidence in everything the bike does, there is zero doubt in the machine or in himself.

Anderson is charging corners, over jumping jumps when he feels he needs too and pushing the limits and getting away with it. This is a guy who has everything going for him, this is Jason Anderson riding at 100% of his potential and showing everyone the reason why he won the AMA Horizon Award back in 2010.

Mentally Anderson has shown he finally has the stuff to win too. He got passed by Seeley at A1 and Phoenix but didn’t give up and re-passed for the lead on the last lap both times to take two brilliant wins. The manner of his passes show that Anderson isn’t there to make up the numbers, he is being aggressive (but clean) and letting people know he is there to win and that he sees himself as the man to beat.

The following week at A2 he got shuffled back at the start and (ignoring the penalty that reduced him to fourth) rode up to second and was even inching up on Seeley again. Anderson has shown he can battle at the front and recover from a bad start. He is starting to tick all the boxes a rider needs to tick to show he can win a championship.

After the penalty Anderson lost the points lead but at Oakland he was on form again. And, although he got a bit of luck with Wilson having problems on the final lap, Anderson was attacking again and was there to take advantage.

Anderson now has three wins out of four and regained the points lead from Seeley to lead by six at the halfway point in the season. Anderson certainly hasn’t got the championship won but he has put him in the best position to win it.

It has taken four years for Anderson to show this form but it shows that sometimes you just need to be patient with young riders as they all mature at different times.

The Rockstar team deserve a lot of credit for sticking by Anderson and believing in him. And Anderson deserves credit for staying loyal to the team despite having the option of going to Pro Circuit in recent seasons.

Both have stuck by each other and both are now getting the rewards. It is a lesson that many teams could learn from. Often young kids are chucked to the side after only one or two years if they don’t deliver the goods. But here, sticking by your guy and giving him the support has allowed the Rockstar team to become winners and get the support of a top manufacturer.

It’s a great story of a team and rider staying together through tough times and working hard to come out on top. And for Anderson, his childhood dream of a supercross title is now there for the taking.