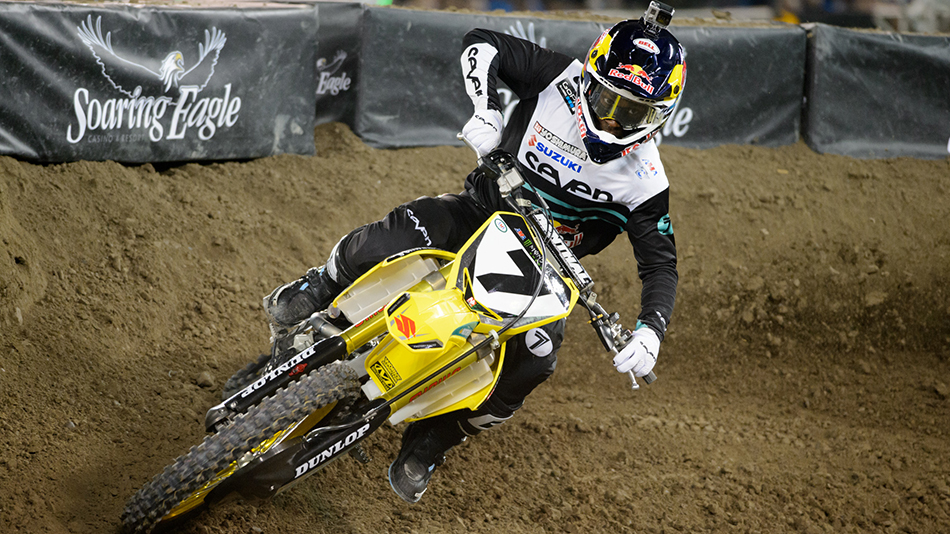 Finally! It took longer than he and us expected but James Stewart is now second on the all time supercross win list.

And what a way to do it!

Stewart started in fourteenth but leaped his way over the field jumping rythms that no-one else dared, or even probably saw, to leave everyone (including his rivals) in awe of his talent yet again.

Even Stewart was impressed with himself, almost a realisation that he still possesses that blinding raw speed that he possibly doubted he still had in this new, ultra competitive supercross field.

“That was probably one of my best races ever, I’m speechless,” said Stewart of his 49th supercross win. “To pass [Ricky] Carmichael and move into second on the all-time wins list is special. This hasn’t even set in yet. The fans kept me motivated tonight. I heard them through every pass, it was great.”

Stewart admitted that it was one of his long time goals to beat Carmichael’s record and he did it one race sooner that RC managed to win his 48 races.

Stewart rolled back the years in Toronto, this was how he used to ride and this was why Stewart has a superstar status in supercross. He can jump things that no-one else can and leave everyone going, ‘Wow, did you see Stewart?!’

James Stewart’s supercross career started in 2002 when he was just 16. He had a lot of hype but immediately showed why. Stewart was simply a phenomenon and by the end of the season had the 250 riders watching him in practice to see what was possible on a supercross track.

Think Adam Cianciarulo (wearing pink) but one year younger and even faster with even more style.

Stewart had style in abundance, wearing personalized pink FOX gear for his entire debut supercross season. He had lot of flash, a lot of confidence and that sensational speed but of course he crashed too. He would eventually lose the championship to Travis Preston (due to crashes) but everyone knew this kid was incredibly special.

The great David Bailey, the colour commentator at that time for ESPN was regularly lost for words that season and said James was the best he had ever seen.

Stewart’s corner speed was incredible, his jumping ability unmatched and he had the charisma to go with it. The world was James Stewart’s oyster in 2002.

Stewart would go on to win the 2002 125 National outdoor title at 16 years of age and the following season dominate the supercross season. He did however crash out of the East/West shootout in spectacular fashion and that meant he missed the first four outdoor nationals in 2003.

He would consequently lose the outdoor championship but did win every moto he entered winning by anything from 30 seconds to a minute similar to how Herlings has been in MX2 GPs.

Despite everyone wanting him to move to the 250 class in 2004 (similar to what everyone wanted Herlings to do ten years later in 2014) Stewart stayed in the 125 class and predictably dominated.

It was in those 125 days that Stewart created his legacy. His 2003 Budds Creek ride from last to first epitomising everything that Stewart represented in those days, he also introduced the Bubba scrub to world that day too!

Stewart is probably the fastest 125 rider that has ever lived although Ricky Carmichael and Sebastian Tortelli might disagree as both had similar mind-boggling speed in their dominant 125 years.

Stewart by now was pretty cocky, claiming he would win in the 250s, beat Carmichael and break McGrath’s 72 win record.

Unfortunately Stewart broke his arm in his second 250 supercross ever and would sit out half the 2005 supercross season. It wasn’t going to plan.

Stewart came back at Orlando and the hype was incredible as it was the first dry race that saw RC v Stewart. James beat Carmichael in the heat but crashed while leading the main leaving Aussie Chad Reed to win in Florida against Floridians RC and Stewart.

One week later in Dallas and Stewart figured it out, winning his first of 49 supercross wins (so far).

But although Stewart showed he could win, crashes continued to haunt him. He even landed on Ricky Carmichael at Unadilla in the outdoors.

He lost the 2006 AMA title by a couple of points despite being the fastest on track (although he did win the World Supercross crown.)

In 2007 Stewart with RC only part-time dominated and finally did what everyone expected him to do from 2002 – become the new king of supercross.

Unfortunately it didn’t last long. A knee injury put him out early in the 2008 season and then Stewart and Reed had a huge battle in 2009 which Stewart finally won at the last round. Once again Stewart was faster but his ability to crash out allowed Reed to keep the pressure on all year.

And amazingly since 2009, James Stewart hasn’t won another supercross title! And that is the conundrum of the James Stewart. He is the fastest supercross rider that has ever lived. But has less titles than many imagined including probably James himself.

Ricky Carmichael has five supercross title to Stewart’s two. And speed wise James was faster than Carmichael and Chad Reed (who also has two titles). Having more wins that RC in less races but having three less titles might just tell you all you need to know about James Stewart’s racing mentality.

RV subsequently came in and already has three supercross titles which looks set to be four in a few weeks. And so strangely, when you look at titles, Stewart doesn’t seem as impressive as he actually is.

But Stewart could easily have won this year’s championship, he has won four races now, more than anyone else, his speed has been good, better than the last few years and he hasn’t even crashed as much but still those few crashes and odd problems have all conspired to keep Stewart out of the title hunt.

Stewart was born with the talent of a Jeremy McGrath or Stefan Everts combined with the aggression of Ricky Carmichael. He had it all and in theory should have dominated like those three did.

But Stewart has never quite figured out being consistent year in, year out like Everts and Carmichael or McGrath. And that sometimes is just as important as talent – you have to be smart.

That is why at the age of 33 Everts was able to ride round the outside of  Stewart at a rutted Matterley Basin in 2006 and why Carmichael has ten titles to Stewart’s five.

But when Stewart retires, he will never be forgotten because of that incredible raw speed and fearless jumping ability, especially in the 125 class. Whether you love him or hate him, when he is on the track you want to watch him because something will always happen that will leave you talking about James Stewart on the way home.

And that’s why James Stewart, although he might not be the greatest, is one of the greats.

Below are two memorable videos of Stewart; one of his rookie season as a professional taking on Chad Reed in the East/West shootout and the other of James winning his first ever 250 supercross race at Dallas. Enjoy!