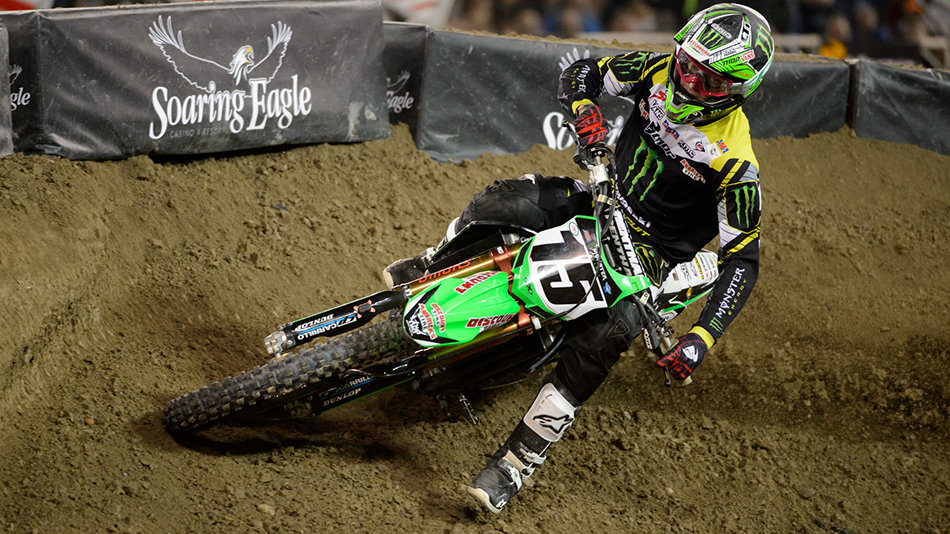 For many years, fans have longed to see Dean Wilson in the premier 450 class. After all, we expected it to happen much sooner, as he was originally slated to join the premier division full-time in 2013. However, his dream never materialised, because of some misfortune that was out of his control. Dean had a shot on the bigger bike at the four most recent rounds of Monster Energy Supercross, but most are on the fence about how these have gone.

Obviously, the four races were crucial in deciding where his career goes in the future. Although there is no doubt that Dean will go on to enjoy a long and prosperous career in the 450SX class, his performances in those races could decide what teams elect to attempt to sign him for the 2014 season, and what kind of salary he can expect to receive. I am sure that someone could easily cave under this pressure. However, Wilson is already an accomplished rider, so a lot of teams would not have relied on those races as much, I am sure.

Anyway, I digress. Overall, his performance at the four races he completed for the Discount Tire Racing crew was not bad at all. But, in my opinion, it was not great either. On paper, there were no results that indicate that the Scotsman is going to come out in his first full 450SX season next year and be an immediate threat. Obviously, his ride at Daytona is the one that sticks out the most, as he showed a lot of potential whilst battling for podium spots. It wasn’t overly surprising to see him run up front at the supercross that most resembles a motocross track; he is a national champion, after all.

Unfortunately that ride has been overlooked by most, as he ended up slipping down the order, because of arm-pump. This proved to be a problem for him at all four of the rounds, unfortunately; it marred his results. If you cast your mind back to the beginning of the year, you will remember that he struggled with it on the 250, also. Now, many people have offered what they believe to be a solution for this, but the source of the issue is unknown currently. It wouldn’t surprise me if this ended up being a supplement issue. Davi Millsaps suffered from arm pump not too long ago, but as soon as he eliminated a certain substance from his diet, the problem disappeared.

Of course, this can be rectified, which is a huge positive for Dean and any of the teams that are tempted to pick him up. He has the speed, and, as we know, that is the hardest to teach. So, as long as he has the speed, many top teams will want him under their tent. Everyone believes that they can fix the minor faults, and that is all the arm pump is, a small issue. I believe that something is going to click one day, and it will no longer be a concern; it was never a real problem for him before this year!

Whatever happens between now and next year, Wilson is going to end up on a factory (or factory-supported) team. In fact, it sounds like some teams are already in pursuit of his signature. Discount Tire Racing are obviously interested, and so are the factory Kawasaki guys, it seems. But, by the sounds of it, he could be heading over to Red Bull KTM. When Wilson was originally slated to join the premier class at the beginning of 2013, Roger DeCoster was eager to sign him – that desire has not diminished, apparently.