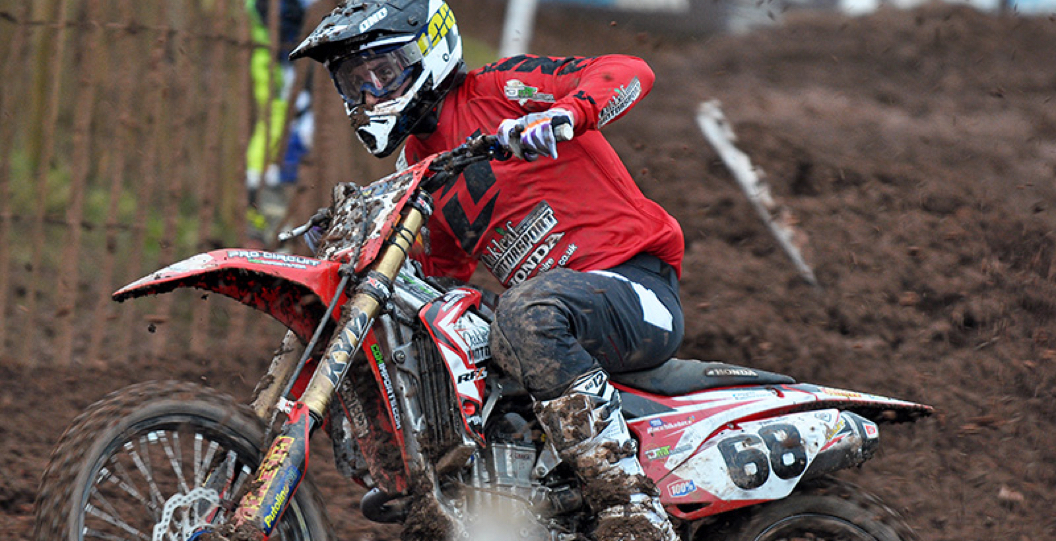 March 8th marked the start of the outdoor season for Oakleaf Motorsport Honda. With an awesome Arenacross series now over, it was now Shane’s turn to take to the track.

The Devon track of Whiteway Barton hosted round one of the Phoenix Tools South West Premier, with the track in good condition we were in for a good days racing.

Practice and Qualification got underway in the morning and Shane certainly looked comfortable on the new Oakleaf Motorsports Honda. A couple laps into the qualifying session and Shane posted his fastest time which placed him second behind Alex Snow, but with a gap of 0.305 it was all to play for in the three races to come.

Race one saw Shane get an excellent jump and take the holeshot but after running a bit wide Alex Snow passed him for the lead. Running second in the opening lap Shane made a small mistake and lost a spot dropping into third. Finding his momentum Shane upped the pace and soon pasted Sunny Thompson for second where he stayed till the finish.

Shane hit the gate at the start of the second race putting him dead last. Working his way through the traffic Shane found himself in seventh at the halfway mark. On now what was a very rutty circuit Shane made a few more passes and got himself into fourth position by the finish.

The last race of the day saw Shane get another good start and lead for the first three laps. Dropping into second on lap four Shane rode a solid laps and kept leader Alex Snow in check. Lap ten saw Alfie Smith catch Shane and Alex and pass them both putting Shane back to third, as the race closed out Shane held onto third and took second overall for the day.

Shane Carless: “First race of the season, bit of pressure but we have word hard bike and the engine. The Honda is unbelievable much better than the Kawasaki to work with. Qualification I got a good lap in, but still a lot of people on the track and couldn’t get a clean lap in, I ended up second. First race I had the holeshot, I went a bit wide and snowy passed me, I stuck behind him the whole way.

Second race I was feeling good but managed to hit the start gate, I was dead last but I managed to come back to fourth. Last race of the day I was tierd, the track is pretty rough and one lined. I was second off the start, I stayed with Snowy though I could get him on the last couple of laps but Alfie Smith came through and passed the both of us. I managed to get second overall today which I’m happy with. A massive thanks to the Oakleaf Motorsports team for all their hard work as well today.”

Shaun Anthony: “Today was a positive way to start the season, Shane looked comfortable which was good to see. The second race start was a shame as that made the day a little harder than expected but we were happy with the outcome and the bike was working well and the team are looking forward to the next round “