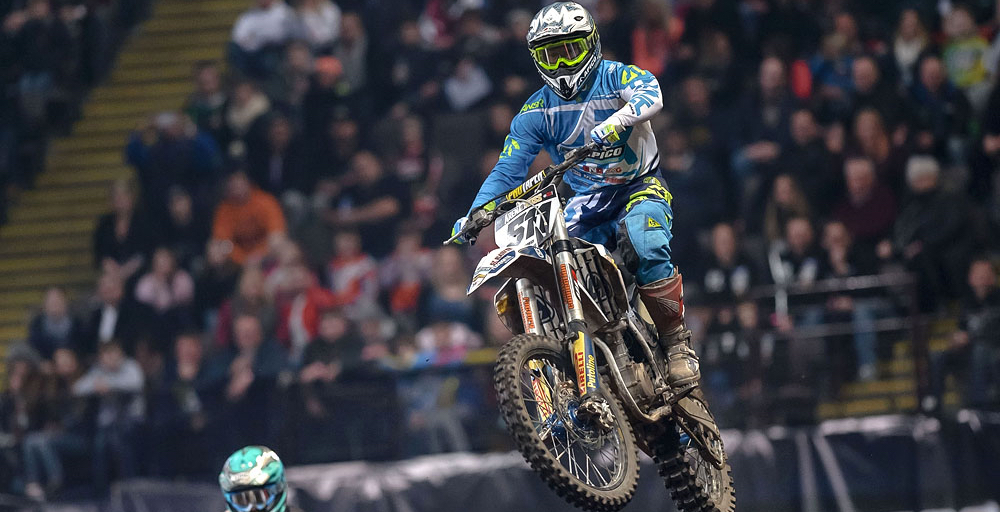 The newest team to the British paddock, Apico Husqvarna Motorcycles opened their racing account this weekend at Round 1 of the Arenacross UK Tour at the Phones4u Arena in Manchester. For the 2015 Arenacross season the team consisted of the highly experienced British Supercross rider Steven Clarke and Franklin Nogueras Jnr.

During the day both riders used the practice and qualifying session to learn the track, and became comfortable with its layout. At the end of the sessions Clarke finished eighth fastest with Nogueras eleventh fastest.

Once the crowds had filled the packed arena it was time for the racing to start and first out on track was Franklin Nogueras, as the gated dropped Nogueras suffered a bad start and had to work his way up to eighth and behind Lopez when the pair collided and crashed hard. Nogueras remounted to finish ninth place. The second heat race there was to see plenty of drama as Clarke started in fifth place and soon moved into fourth, but was later passed by Elliott Banks Browne. As the race progressed Clarke was riding well in fifth when Banks Browne and Greg Crater crashed and opened the door for Clarke to take third place at the finish.

The second round of heats saw Franklin out on track first and as the gate dropped he fired himself into second place and was looking good, until Thomas Ramette passed for second, but a lap later Ramette crashed hard and Franklin was back into second and secured a solid second place finish and an automatic place in the Main Event. In the last heat race Clarke gated in fifth place and moved into fourth when Rombaut crashed at the end of the opening lap. As the race continue Clarke worked hard to move forward into third at the finish and third qualifier for the Main Event.

Before the main event it was time for the Head to Head and unfortunately after making a good start Steven Clarke lost out to Thomas Ramette following a heavy crash and suffering a knock to the head.

In the main event Clarke and a few others crashed into the start gate and recovered deep in the pack. While Clarke was in the mid pack Nogueras was battling his way into sixth before crashing on the triple and remounting to finish Eleventh. At the front Clarke had moved up into sixth place to take a solid result and some much needed championship points following his crash earlier in the evening. The team now have a two week break before the second and third round in Belfast.

Steven Clarke: Tonight was a rough night, I crashed in the Head to Head and hit my head pretty hard and wasn’t feeling great from that point onwards. Then in the Main I hit the gate and from then it was just survival and I managed to finish sixth, so for as bad as the night was, it was still a solid night and we have some good points on the board going into the next round.

Franklin Nogueras: Tonight has been awesome, it was my first time on this bike and racing in the UK. Overall the event are great and the team have given me a superb bike so I’m looking forward to building on tonight’s result at the next event.

Richard Clarke (Team Manager): it’s been a bit of a rough night, with a tough track but both riders have come through it without any major injuries and we can hopefully build on this event. Steven has scored some solid points after an eventful Main Event and Franklin rode great for his first time on the bike and in the UK. We now have two weeks until the next event and we hope to build on tonight.