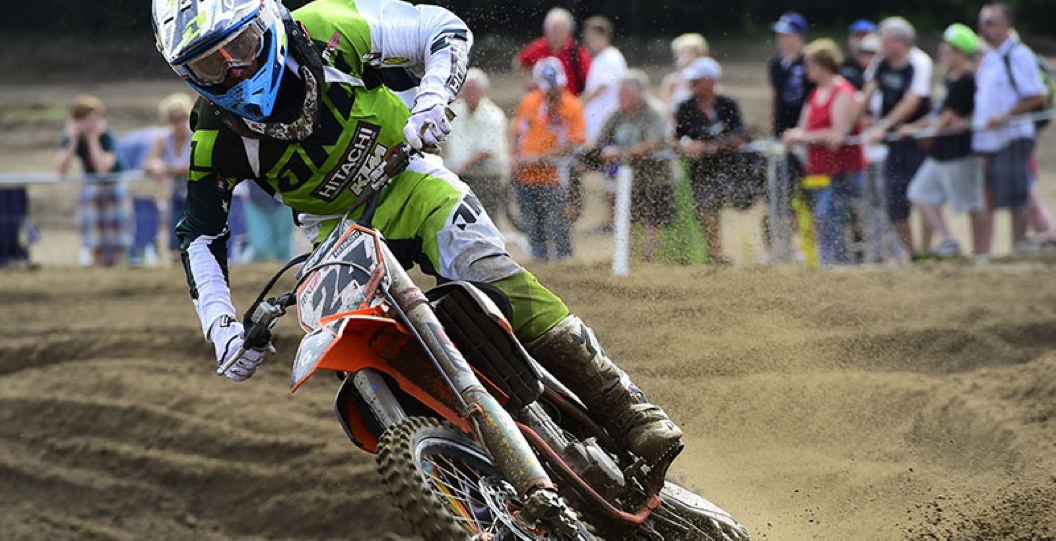 Simpson takes to the MXGP podium

A final bow in front of European race fans for Hitachi Construction Machinery UK KTM this year saw Shaun Simpson achieve the distinction of earning podium trophies in both MX2 and the premier class of the FIM Motocross World Championship for the team as the Scot claimed an impressive third position overall at the Grand Prix of Belgium.

The Lommel circuit in Limburg fulfilled expectations as a tough, draining and demanding racing surface. The sand constantly shifted and became rougher throughout the weekend. Maintenance work was carried out in some key sections but otherwise it was the same daunting prospect that many Grand Prix riders use for a hard edge to their training and testing.

Simpson initially battled for Pole on Saturday and ran as part of the leading group until he fried his clutch and had to lower his speed. Humid conditions gave way to hot sunshine on Sunday and then finally an explosive summer storm in the last five minutes of the second moto that almost rendered the race a non-event. 21,000 spectators lapped up the action at Lommel for what was the fifteenth of seventeen rounds in the FIM series and the last meeting on European shores before the campaign concludes with visits to Brazil and Mexico.

Simpson started the first race struggling to find his rhythm and flow. The British Champion-elect was passed by three riders and had to settle down and discover his lines before he embarked on a powerful surge to the front. One of just three MXGP riders to nail the long quad jump in the rhythm section, Shaun moved to third place and harried Gautier Paulin to the finish line; one more lap and ‘24’ would have shifted into second behind runaway leader Tony Cairoli. In the second affair Simpson was quicker off the line and tucked in behind Cairoli in the formative stages of the race. Shaun could do little about Cairoli’s mastery but ran most of the thirty minute and two lap distance alone in second place until the torrential rain arrived and he had to slow. He was unexpectedly caught by Ken De Dycker but was still able to toast his first podium visit since Lierop at the end of 2013 and his second ever in the class. After giving the team their very first Grand Prix trophies in 2008 in MX2 Simpson posted another small milestone in Hitachi Construction Machinery UK KTM’s history.

In MX2 Mel Pocock battled outside of the top ten for fourteenth and fifteenth places on the 250SX-F. In just his second Grand Prix at Lommel Mel fought to keep his pace consistent and although the closing phases of the races were encouraging the British Championship contender perhaps could have been closer to the top ten.

Ben Watson was competing on the 250SX-F for the final fixture of the European EMX250 Championship. The teenager ploughed through the sand to capture 14th and 7th in the motos to end his first full season on the international scene with 10th overall and 5th in the series standings. The highlights were two victories in Bulgaria and the UK.

An important week ahead now for Hitachi Construction Machinery UK with the penultimate round of the Maxxis British Championship at Amesbury on August 10th. Simpson has the chance to wrap up the MX1 crown – his second national title and first in the premier class – with a 118 point lead and he has not dropped out of the top three in any of the fifteen motos run so far this season.

Shaun Simpson:
“It was nice to show today that Lierop last year was not a fluke and I can ride the sand well. It was frustrating not to find the rhythm straight away in the first moto and I think I went back to eighth or ninth. The track had been graded quite a lot and some bumps had been removed, which I didn’t really agree with, but I managed to pick up my speed and come all the way back to third. I was even thinking ‘this might cost me in the overall ranking’ when I was behind Gautier and eventually it did when Ken passed me in the second. Tying on points put me third overall instead of second. I think I’ve climbed back up to fifth in the championship now so ‘progress’ and we’ve been turning the screw this year, developing the bike and I’m really happy with it. I hope we can carry on in the next two races like this.”

Mel Pocock:
“I kinda got my rhythm at the start of the race but was then knocked down, bashed about and then found it again at the end. My performance at the end of the motos is a plus point to take away from here. I managed to do some beneficial changes to suspension and I would have liked to be closer to the top ten but they were two solid rides. Now I have a big job to do next weekend.”

Roger Magee, Team Principal:
“We had a lot of anticipation coming to Lommel because we know that Shaun can do special things in the sand. He was very sensible through the two motos today and the only thing that affected him was that strong rainstorm at the end of the day but he knew what he had to do and brought it home. It means now that he has delivered podiums to us in both MX2 and MXGP level and its another tick on the ‘to do’ list. We’ll look forward to going to the penultimate round of the British Championship this week where he needs to go easy and hopefully confirm a second MX1 national title.”