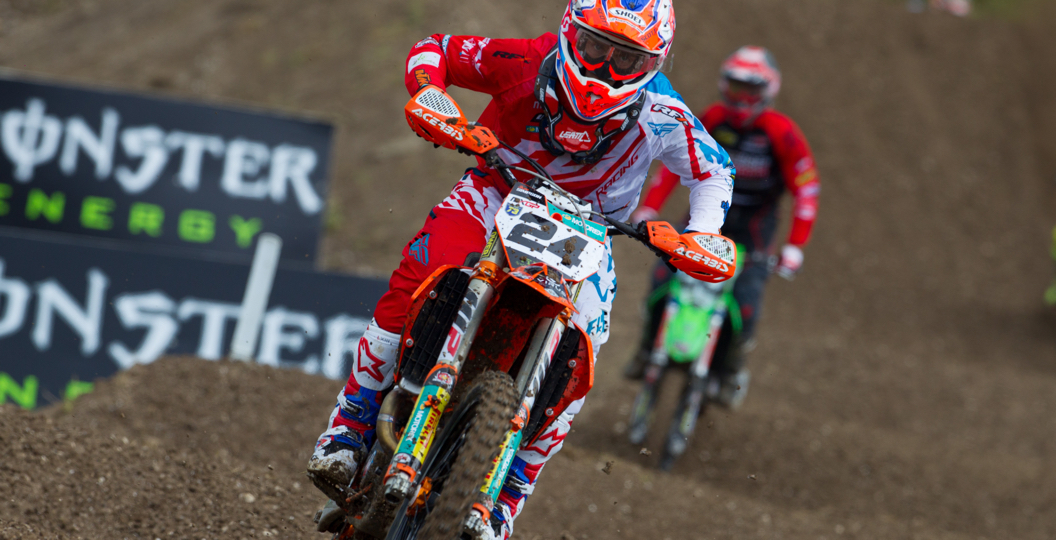 The Wilvo Virus Performance KTM team managed to salvage points on what was a turbulent weekend at the GP of Great Britain, which is one of the more poignant stops on the calendar for the squad. Shaun Simpson and Adam Sterry both faced adversity, but the support from the British fans aided them in their quest to overcome their respective issues.

Adam Sterry gave the patriotic British fans something to cheer about at the start of the MX2 qualifying heat, as he started inside the top three and ran the pace of the leaders through the first five laps. A freak technical issue would eventually force him to withdraw from the heat, however and leave him with the thirty-sixth gate pick for the following day. Although that would leave Sterry in a poor position on the starting line, he was quite confident that he would be able to turn it into two good starts.

After saving some energy in the practice sessions, Shaun Simpson was hoping that his hand injury would hold up somewhat across the twenty-minute qualifying heat. Simpson started just outside the top twenty and managed to maintain a consistent pace whilst battling with those around him, before upping the intensity in the closing stages. Despite the injury, he was able to make three passes in the last four laps to cross the line in twenty-first.

An unfortunate incident at the start of the first MX2 encounter left Sterry on the floor and with a large amount of work to do, but he was not deterred. Posting times that were competitive with those in the top ten, he climbed as high as sixteenth before being taken out by another rider. Although Sterry was fighting a painful back after that, he continued to push forward and eventually crossed the line in twenty-eighth; a result that was not a true representation of the speed and character shown.

Simpson had a better start in the first MXGP moto and ran just outside of the top fifteen for a majority of this one, despite the fact that a packed schedule had started to take its toll on his hand injury. A slight mistake unfortunately cost him dearly towards the end, as he would slip back to nineteenth. That gave him two points, which will undoubtedly be valuable as the season starts to wind down.

The second and final MX2 moto started in a similar way for Sterry, as he crashed in turn one and again faced an uphill climb. He put his head down immediately though and was quick to make progress; he was already nineteenth by the end of the first official lap! Matterley Basin is typically a tough track to make up time on, but he made multiple passes through the first half of the moto to edge closer to the top ten. He would eventually finish eleventh, just five seconds down on the rider in tenth.

The ten points gained on the day left Sterry seventeenth overall and helped him gain two spots in the series standings, as he is now tied for twenty-third, just ten points separating him from a spot in the top twenty.

After experiencing a lot of pain, Shaun Simpson decided to not start the second MXGP moto as the risk outweighed the possible reward. This led to him losing a spot in the series standings, but he is sat quite comfortably in eighth and not too far from the rider in seventh.

Shaun Simpson: “It was a frustrating weekend for me with the hand. I managed to do what I could yesterday and did not actually come out of it too badly, as I had twenty-first gate pick. I got a decent start in the first one today after not really riding too much of warm up, as yesterday took its toll on the hand. The painkillers were wearing off in the last few laps and it was really tough, as the hand was hurting a lot more than I expected. I decided to not ride the second race, because I didn’t think it was worth it for the amount of points I was going to gain.”

Adam Sterry: “It was a tough weekend! The bad luck that we had on Saturday really hindered us on race day. I was right on the outside and got taken down twice in the first turn. My speed was good all weekend and I was pulling through well in race one until I got taken out and hurt my back. In the second race I went from last to eleventh, which I was happy with. It was a shame in front of the British fans, but I gave it my all.”

Steve Turner: “It was a really difficult weekend for both riders; Shaun’s hand injury proved to be too painful on the fast, rough Matterley track and in reality it was asking a lot for him to be competitive over a complete GP weekend. People may ask why he can finish on the podium the week before at the British but struggle so much here, but it’s more than double the workload and is over two days with no time to recover after day one. He then has to try and compete in two full races on day two. It’s obviously disappointing for him in front of his home fans, but he couldn’t have tried any harder.

“Adam had the frustration of having to battle from the back in both races but he showed great speed and great determination in both and although in the first one he had all his good work cancelled out by being taken out he got his just reward in race two with a fantastic ride for eleventh. He’s showing impressive speed now and I really think he’s got some head-turning results just around the corner.”