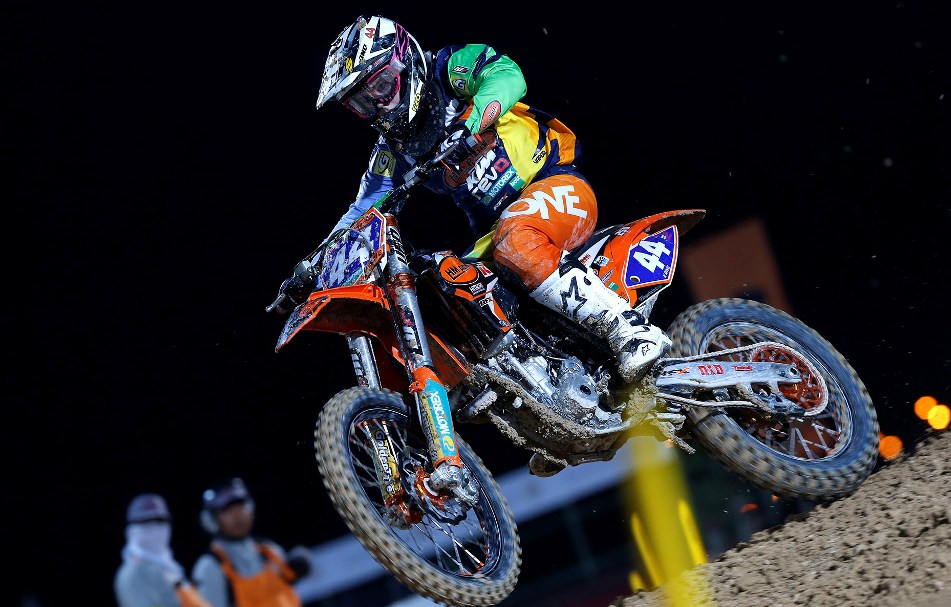 Natalie Kane was the stand-out performer for the HM Plant KTM UK team in the blustery night air of Losail for the Grand Prix of Qatar and the very first round of the FIM Motocross World Championship that also saw the six round Women’s WMX series get underway. The 250SX-F rider placed second on the podium at the circuit just outside of the city of Doha and began an authentic challenge for the title in a contest where the Irishwoman has been a rapid contender for several seasons.

Over in the MXGP and MX2 classes of the Grand Prix Shaun Simpson and Mel Pocock endured tough first appearances for the team. The Scot, winner of the last round of the 2013 FIM MX1 World Championship (now rebranded to ‘MXGP’) was running as high as fourth in the qualification heat on Friday but a delaminated rear tyre caused a DNF.

This meant a lowly gate pick for the (shortened for 2014) 30 minute and 2 lap motos Saturday evening. ’24’ fought well to be vying for a top ten position but a crucial mistake on the last lap when he stalled the 450SX-F in a corner saw Simpson concede tenth place to Joel Roelants. The second moto barely got underway before the former British Champion somehow dislodged his oil filler cap and the bike lost all liquid and stopped. He pitted for a solution and continued with some laps but classified out of the points.

Mel Pocock was facing an uphill task before the Grand Prix had begun after a bout of food poising left him low on energy, sick and barely able to ride. In fact the 2012 European Champion did not leave the pits for practice on Friday. After treatment with a drip the Englishman felt slightly better on Saturday and profited from a good start to capture 13th place. The lack of stamina took its toll in the second sprint though as he dropped from 14th to 19th.

It was left to Kane then to rescue some honour and she duly obliged – despite also having to recover from illness, a bout of the flu – with strong rides to 2nd and 3rd; the latter gained in spite of some rear brake fade.

Simpson and Pocock along with the team began preparations straight away after the race on Saturday getting the bikes crated and ready for the journey to Thailand and the second round of the championship this coming weekend.

Natalie Kane: “I wasn’t feeling that well coming here but everybody has their own problems to deal with. We obviously haven’t been here before so I was watching videos beforehand and it still feels weird to race in floodlights! They made a mistake by watering the track so much before our first moto. It was like it had rained in the night and everybody was sliding everywhere. Anyway I quite enjoyed the track generally; it was tough, it was something different and I’d definitely like to come again. The goal now is to keep injury-free and get some more bike time ahead of the next race.”

Shaun Simpson: “I believe – a lot – that your ‘Sunday can come off your Saturday’ and, in this case, Friday was going well until we had our problem. I felt great on the bike and the speed was there. I was fastest in warm-up but just getting out of the gate today was always going to be hard work. I do genuinely believe that if I had got away well at the start then I could have been anywhere between sixth and tenth easily. I feel that I am riding well enough to be there. We’ll see if we can make it happen in Thailand.”

Roger Magee, Team Principal: “It’s always nice to have a podium result at any GP but today Natalie Kane proved that she is a real contender for the 2014 Women’s World Motocross Championship. Shaun suffered a freak technical problem in the qualifying race which left him with a poor gate pick for the two GP motos. He battled on in typical gritty fashion and just missed out on Championship points the second time out. In MX2, Mel Pocock’s inaugural GP for HM Plant KTM UK didn’t start well as he needed medical treatment, missing the qualifying race. After feeling a little better today, he took the courageous decision to compete. He will now seek additional medical assessment to assist with his recovery from illness.”