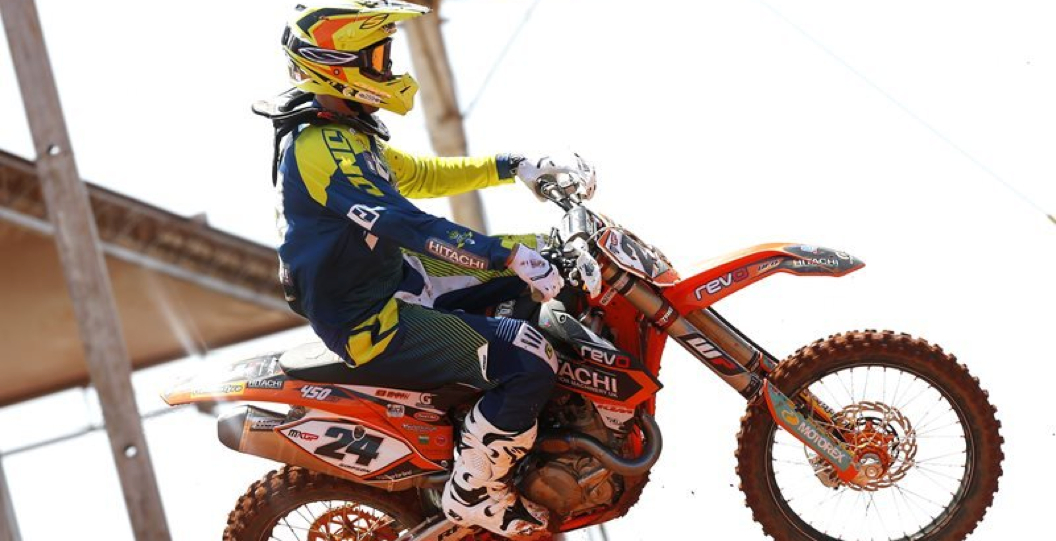 Hitachi Construction Machinery KTM UK’s Shaun Simpson unveiled the application and fighting spirit that has elevated the new British Champion near the top of the MXGP standings by scoring twelfth position overall at a hot Trindade circuit for the Grand Prix of Goias in Brazil. The Scot suffered only his second ‘DNF’ in thirty-two motos this year when a crash while fighting for fourth place in the first race led to a briefly dislocated shoulder. Simpson was able to quickly re-insert the joint and thanks to some painkillers and strapping rode superbly to take sixth in moto two and keep in contention for a top five finish in the world.

The second visit by the FIM Motocross World Championship to Brazil meant that MXGP travelled north and to a brand new track a short distance outside Goiânia. Temperatures were high and typical native fever for motorsport was evident also through the bounteous 25,000 attendance.

Across the dark red dirt that was hard-pack but also tacky and soft in some sections Simpson was again a protagonist in the premier class and as the sole representative of the team to make the transatlantic trip. An attacking performance after a shaky start on Saturday and in qualification meant that Simpson was able to push through to a fine third position on his 450SX-F for the same choice in the gate for Sunday motos. He was also fastest in morning warm-up.

He had ambitions for the top three again in the first outing but was clipped by Ferris as both riders tried for the same line after the wave section behind the pits and had to administer his own treatment trackside. Shaun felt that the injury was not too bad and after some inventive strapping went out to try again. A reassuring sighting lap led to a decent start and then some steady pace that improved in the final stages of the moto to reward ‘24’ with sixth.

17 points means that Simpson now has the goal of outpointing Steven Frossard by ten in Mexico to determine who will finish fifth in the championship for 2014. .Meanwhile back in the UK Ben Watson shone at the latest round of the MX Nationals at Preston Docks by winning the MX2 class and Natalie Kane also owned the Women’s category on her return to action following injury that largely ruined her chances of title glory in FIM MXW this year.

Hitachi Construction Machinery UK KTM will now move across the continent and to Mexico for the final round of the series that will take place at another new facility near the city of Leon.

Shaun Simpson:
“Today was a lot about keeping those hopes of fifth in the championship alive. My speed had been great all weekend and I was not outside the top four until the first race today. I was really happy on the track and thought there was a few different lines. I was disappointed with how it turned out in the first moto. I crashed awkwardly and my shoulder came out. I did what I could to be able to start the second race. I did the jumps on the sighting lap and thought ‘this is OK’ and it gave me confidence going into the first turn. I was third or fourth and made a small mistake. Tommy was hounding me and I was trying to figure out how the shoulder would affect me when I had a small slip. I went back a few positions. My speed at the end was nice. I passed Philippaerts and was right on the back of Guarneri at the end. I felt great and I feel good on the bike; it was just a shame that the crash happened today. Maybe the shoulder is not as bad as we thought. I won’t be riding this week – nobody will actually as we go to Mexico – and I will do what I can to be ready and try for that fifth place.”

Roger Magee:
“A hard day for Shaun and especially after all his work to try and secure fifth in the championship. I thought he showed real courage to go out in that second moto and in a way it typified the season he has had this year. With the top four set in the MXGP Championship standings the battle between Shaun and Steven Frossard will be one of the focal points in Mexico and we’ll look forward to it. I’m really pleased that Ben and Natalie also gave us some good results back in the UK.”