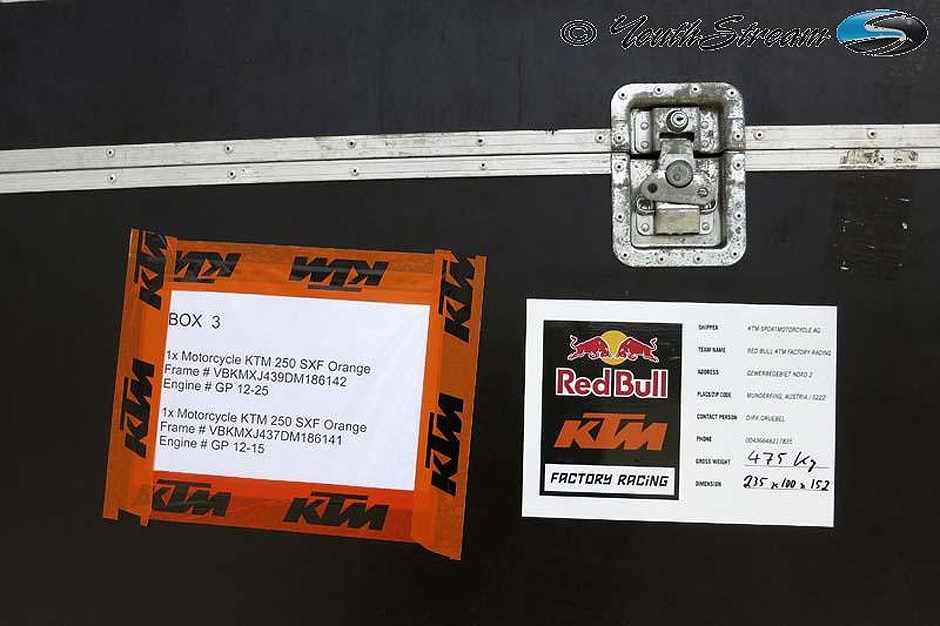 Should the GP’s ‘fly away’?

In the last few weeks, the 2012 FIM Motocross World Championship has already completed the ‘fly away’ races for this year. Obviously, by now everyone knows the races were met with mixed reviews from riders, fans and the industry in general. The GP of Mexico especially was on the receiving end of a lot of criticism, due to a handful of different reasons. The Brazilian GP was a by all accounts was just unlucky with the rain making it more of a washout, which meant it didn’t end up as good as it perhaps could have been.

So, should the GP’s continue travelling to these fly away races? When you have some tracks in Europe that are guaranteed to bring in a large crowd (or at least larger) and also have a track, and facility that is proven and liked by many. Thinking ‘outside the box’ and travelling to somewhere, which really is unproven like Mexico, was a bit of a gamble. This time, that gamble definitely didn’t pay off but you can argue it’s the beginning of a work in progress.

Anytime you go to a new venue, or country it’s going to be a gamble and despite it maybe not going to plan this year, early talks from Youthstream indicates the series could be making more trips across the Atlantic ocean as soon as 2013. By doing this though, it is not only a risk for the promoters, as there’s no guarantee a country will welcome the series with open arms, and turn up in thousands to watch some of the world’s best riders. It’s also risky for the teams. Travelling halfway across the world to a ‘dustbowl’ in the case of Mexico, and then there being a possibility of your riders not even racing is not a good scenario for a team or their sponsors.

There are also some good things that can come from these ‘fly away’ races however. Beto Carrero was a prime example of this. With a track, and facility that had been in the works for months, when dry it looked phenomenal and was met with only positive reviews. The location was key in determining the success of the event, locating the circuit on the outskirts of a theme park undoubtedly attracted the attention of people who perhaps didn’t really know a lot about the sport. The outside interest that the Brazilian GP could have generated surely makes it worthwhile that the series visits locations like this.

The Brazilian fans really got into, even though the riders were almost in Enduro mode just to get round the track.

But then somewhere like Mexico, where the crowd turnout was dismal, the track wasn’t the greatest, and the location encountered all kinds of troubles you have to think needs some work. I know a lot of people may be hoping the Mexican GP disappears and is put down as just ‘a bad idea’, but with a five-year contract, you can expect to see it on the schedule for a while.

Thinking about it from the perspective of Youthstream, you can fully understand why they try out these new locations. For years, they have come under criticism for not being ‘a true world championship’ because all their tracks are based in (or at least close to) Europe. But when they do try and please the naysayers, they have poor attendance.

A prime example of this is the now defunct American GP at Glen Helen – many fans argued that the GP’s couldn’t be considered a world championship until they visited the USA, a country that is a huge part of Motocross and accounts for thousand of off road bike sales worldwide. When they did, it didn’t turn out as they wished, they had the track, they had the riders, and the crowd just weren’t interested. Those people arguing that the GP’s need to visit America didn’t care enough to support the event and now Youthstream are forced to think (as mentioned previously) outside the box.

Next year a new circuit and country will be welcomed to the schedule, Thailand. Although your immediate reaction may be negative, there’s hope. The original press release came out for this GP way back at the beginning of 2011, which indicates this has been something they have been working on for a large period of time. Also, the promoters of the GP have visited various GP’s in the last year, as recently as Brazil. This again gives me the impression that a lot of thought and planning has gone into the Thailand GP of 2013!

The idea of an Australian GP has been tossed around in the last few years, and even made its way onto the provisional 2011 schedule, but never materialised. The prospect of returning to Australia, despite costing more, is something most are more excited about. Mainly because the country already has a very strong motocross base, with very good riders racing in all corners of the globe, this is also something Brazil had, and something that Mexico and Thailand maybe lack. Just from catching a glimpse at the Australian Nationals, it is evident that there are many top quality tracks in the country. Otherwise, why would riders like Brad Anderson, and Billy Mackenzie choose to race there? It’s almost as if it acts as reassurance.

The way I look at it is, Motocross is a niche sport, so when Youthstream attempt to gain more exposure by visiting these countries it can only be a good thing. For Instance, national newspapers in Mexico were covering the event. Although somehow it ended up working against Youthstream, as it was reported to the entire nation that the GP was cancelled after the rider protests during Saturday qualification. Still, it’s a huge step in the right direction. When the British GP rolls around you don’t see any positive coverage in national press. In my opinion, that’s what is holding us back from attracting fans that aren’t into motocross, most of these ‘fly away’ races can do this.

It’s not just the track, or the facility, or even the country that affects the quality of the ‘fly away’ races. Backmarkers are something every race will feature, but when you travel to Mexico for instance, and have riders thirty seconds off the pace per lap! It’s quite a bad representation of Motocross in general, but on the other hand, the top local riders deserve the chance to showcase their speed. Sometimes this is where hidden talents are recognised, but it can also turn out terribly and even end up injuring some of the Grand Prix elite like Michael Lieb in Mexico.

2012 perhaps weren’t the best representation of the ‘fly-away’ rounds, and although you could easily pick many faults out of both rounds, the benefit outweighs the negatives in my opinion. The opportunity to showcase Motocross to a wider audience is crucial, and by visiting countries like Brazil – and in the future Thailand – it classes the series as a true, world championship.