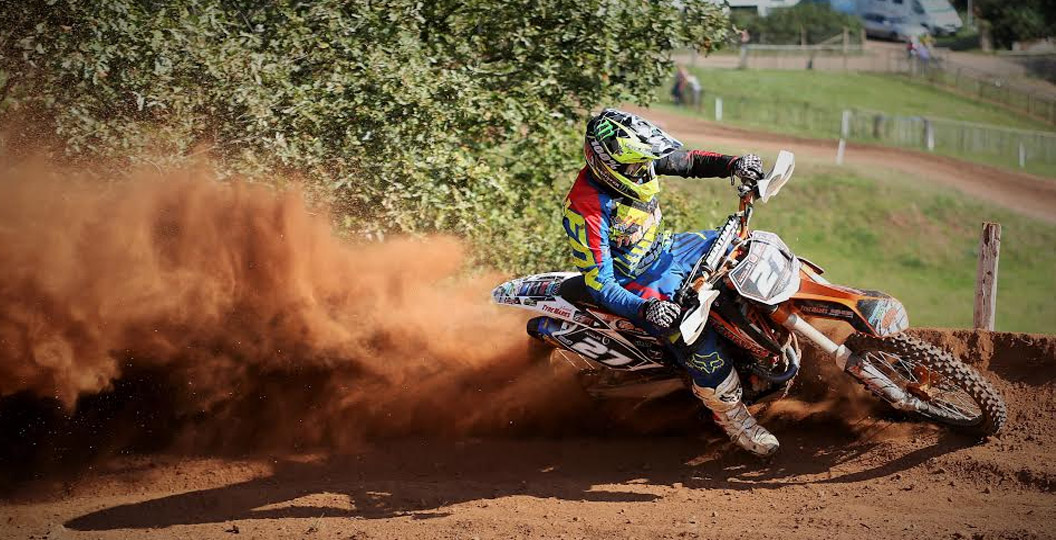 With a full house in all classes, Phoenix Moto Park was set to host the penultimate round of the SWOR Championship. Starting the day in glorious sunshine with a well prepped track in front of him, who better to entertain the crowd than local legend Wayne Shimmel.

With Shimmel riding you always know you’re in for some “edge of the seat racing” and today was no exception. Race one came to an abrupt halt after a ten bike pile up prompted a red flag. Once the marshals had cleared up an unusual expert mishap, the racers were back on the start line. Shimmel, Joe Clayton and Nick Life left the line up with a blistering restart.

Shimmel took the lead but after one lap the three riders were barely a bike length apart. As the race developed Life started to fall back leaving Shimmel and Clayton to fight for the win. Shimmel continued to lead with Clayton getting ever closer, but just when Shimmel thought he’d done enough Clayton made the pass in a daring move before descending down over Deer Park Hill, and from there went on to take a fine win. Races two and three totally belonged to Shimmel though, and as hard as Nick Life was to chase, I’m afraid Shimmel was having none of it and gradually pulled further and further away to take the well earned victories in both.

Thomas Townrow in the Inter 14-16 class was to take a strong win in his first race, but Callum Warren proved to be the strongest rider in the group overall, winning both races two and three. Warren seemed to come alive today and was tearing around the track every bit as strong as an expert and leaving his fellow riders to chew on the trail of roost he was leaving behind him.

In the Inter 9-13 group Louis Thomas was in a class of his own – three races and three win. Sam Hunt and Jordan Veale were to try their hardest to keep Thomas on the straight and narrow, but to be honest today they were no contest, as the young rider was long gone from the off and virtually uncatchable in all three races. Definitely one to watch in future events, I think as his skills develop I believe riders in other groups will be keeping an eye as he climbs the ranks.

Junior Elite and the Over 40’s joined forces to present us with some exhilarating performances, but who other to show them all hows it’s done than Rick Hanson! Hanson comes from a family of top riders, with brothers Greg and Keith always in the headlines, but today this was the Hanson in control. Hanson led the way in style, out jumping, out cornering and in races two and three especially out racing everybody to take three victories with a commanding performance.

Onto the Junior Open and Matt Bersey continues his championship charge from last week, taking wins in races one and three. David Gould was the rider denying Bersey the hat trick and finished some seven seconds ahead. Paul Brooks also enjoyed some strong results today finishing second in race two and third in race three, another rider taking a hat full of points into the final round.

Finally the Seniors and Matthew Wells, after finishing out of the top six in race one, came back with renewed vigour and took the victory flag in the remaining two races in this group. Race one winner Kieran York took the overall result though, after finishing second behind Wells in races two and three.

The final round in two weeks time is shaping up to be a spectacular event as most groups have no clear winner yet and there is still everything to play for. With double points up for grabs, anything could happen!