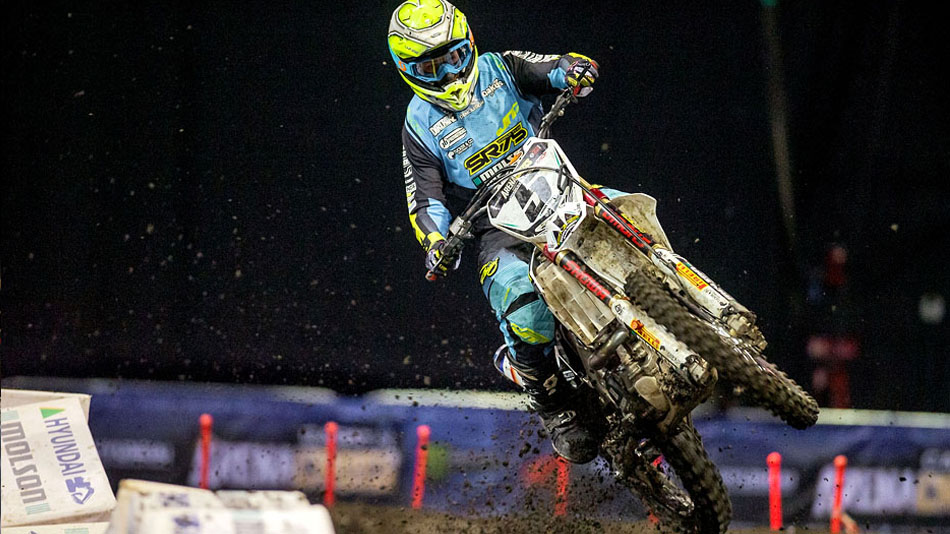 Sheffield Supermen line up at the Motorpoint Arena…

If you haven’t recovered from the insanity of Newcastle yet then you better sort yourself out soon because we’re offering up more of the same on Saturday evening (February 15) when round six of the 2014 Garmin Arenacross Tour touches down at the Motorpoint Arena in Sheffield.

Newcastle featured the race of the year so far (although we said the same after Liverpool) with a truly brutal triple pretty much deciding the result. Steven Clarke (Dyer & Butler KTM) nailed it every lap and went on to win from Cyrille Coulon (SR75-Molson Suzuki) and that victory has reignited his championship hopes with just two rounds to run.

“The triple was tough but it was just about picking a good line and committing,” says Steven. “A lot of riders were backing out at the last minute and that’s why they got into trouble.

“I didn’t even make the final last week and to come back and win here means a lot to me and puts me right back in there in the title hunt – this championship definitely isn’t over yet. Anything can happen in this sport – Fabien could be leading it until the last corner of the last race of the last round and something could happen. Nothing’s guaranteed!”

As Steven points out, it’s fast Frenchman Fabien Izoird (Apico LPE Kawasaki) who leads going into Sheffield and despite losing out to the 23-year-old in the North East he extended his lead at round five when a beaten-up Daniel McCoy (MBO Sport ASA Yamaha) – who’s second in the points – could only tough it out to 10th in the Main Event after crashing hard in his final heat race.

Izoird, who openly admits to playing it safe in Newcastle, is the consistent class act of the field and has a 17-point lead to prove it.

“That was a very difficult track and I stayed very cool behind Cyrille and Steven,” says Fabien. “I didn’t want to take a risk like last weekend and crash. I took four points in the Head-to-Head and was third in the final so it was good for the championship but I’m not really happy because I always want to win.”