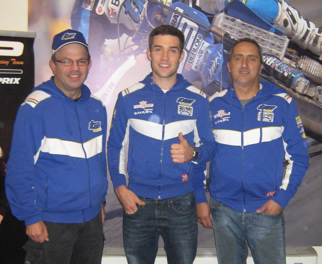 TM Racing has scored a double whammy for the 2013 season of the World Championship of Motocross.

We are very proud to announce that the TM Factory Bikes will be managed by Team Ricci Racing for the 2013 World Championship. Combined with the TM brand and the expertise of our new team manager Ilario Ricci, TM are looking forward to a successful season with a rider in each of the MX1 and MX2 categories.

Our second piece of exciting news is that we can confirm that Shaun Simpson will be riding the TM for next season’s World Championship. The MX1 rider who has previously ridden for KTM and Yamaha Factory has chosen TM Factory with an aim to compete and secure a place within the Top 10 of the MX1 class.

In a statement from the rider, Shaun expressed his enthusiasm and motivation for next year’s season:

“I’m really excited to be riding for a brand that’s as charged and motivated as me to get the results I want. Working with Ricci is something I’m really pleased about- he’s had some proven experience with two different brands in the last three years and I think it’s an ideal combination at the right time. It also made the idea of developing and racing with TM a really interesting prospect for me and I’m glad we’ve sealed an agreement for next season. For me personally, I’m ready for next season, I still think I have a lot to show in MX1 and I really think this is a great base for me to push on that and get the results I know I’m capable of. The bike feels good, it’s strong, and in the hands of past riders it’s shown great potential. It’s a new challenge for me and I’m geared up and motivated to push TM into a wider and greater reckoning.”

“I am very honoured to have been welcomed so warmly into the TM family. It’s a wonderful team of enthusiastic, focussed professionals, and together we have the energy and stimulus necessary to tackle this important challenge. I have high expectations for next year’s season and I believe that we can raise the bar at TM.”

A big welcome from TM Racing to Ilario and Shaun, and we wish the whole team the best of luck for next year’s season. With a great team behind the TM brand and, as always, maximum determination and professionalism, we’re looking forward to a successful season.