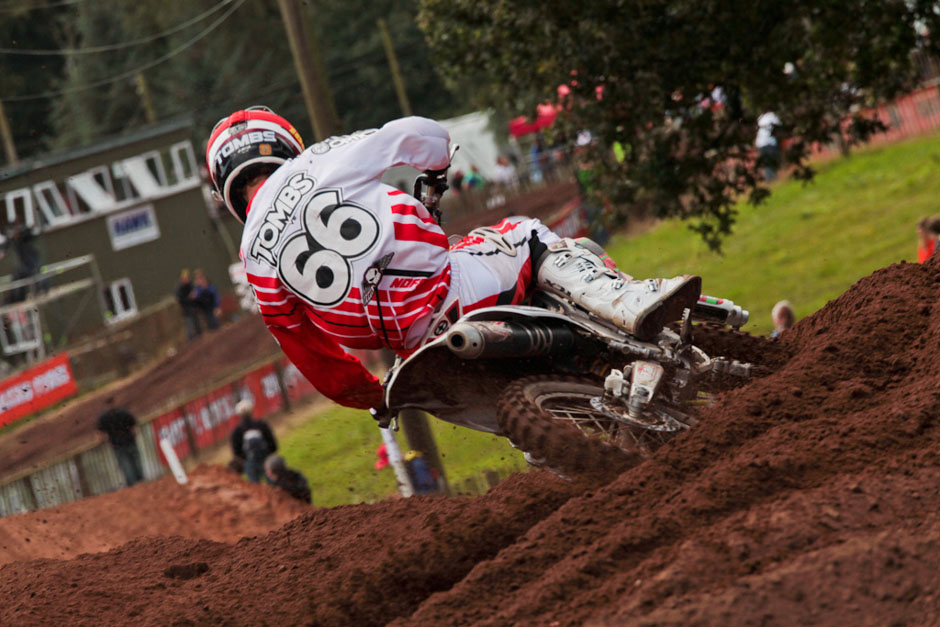 Seventh for Tombs at Hawkstone

Hawkstone Park is a venerable institution in the Maxxis British Motocross Championship calendar, and John Banks Honda-supported rider Lewis Tombs made the trip there with the full intention to tally up yet more points in his quest for a career best finish.

For Tombs, qualifying was more about getting to know the track intimately without crashing, qualifying fourteenth and barely missing out on the super-pole session.

Getting off the start is generally not a problem for Tombs, and for his first race here, the left-hand side of the track was ideal to launch into the race without too much interference. The trick successful, Tombs found himself in the top ten, soon fighting off strong rivals, but having to concede a position before the end of the race. After ending the first race in tenth, the bet was on to improve on this position. Again a great start launched from the left side of the start line, Tombs was forced to dig in and stem the loss of positions. An aggressive campaign by fellow Honda rider Nathan Watson moved him into ninth place, only for Tombs to be toppled by Luke Remmer with the timer ticking down to zero.

The first two races scoring Tombs a tenth overall meant that he could participate in the super-final. A good start against a mix of the top MX1 and MX2 riders allowed Tombs to hold his own, albeit a few positions further back than in his first two races. Running in a solid fourteenth place, Tombs made things very difficult for fellow Honda MX1 riders Gert Krestinov and Dorren Coutts, as well as battling with fellow Suffolk local James Cottrell, giving up his position only towards the end of the race. The points tallied up to enough to move Tombs into seventh place on the day, his second-best result thus far.

Commented Tombs: “I qualified in fourteenth which was alright, and missed out on qualifying which I wasn’t too worried about. In the first race I got a reasonable start; I didn’t get a great jump but because I was on the left-hand side of the track it was pretty good. I pushed hard the first few laps just inside the top ten and battled with Luke Remmer which was good. He got me towards the end and I got tenth, which was a good start. In the second race I had a reasonable start, I worked hard the first few laps and got up to tenth, where I stayed for the rest of the race. I got a tenth which was two consistent rides. In the super-final I had a mega start, was top ten and some of the 450s got me and dropped me back a bit but I ended the race in sixteenth. I had a great battle with James  pretty much the whole race, so I’m quite happy with a seventh overall.”