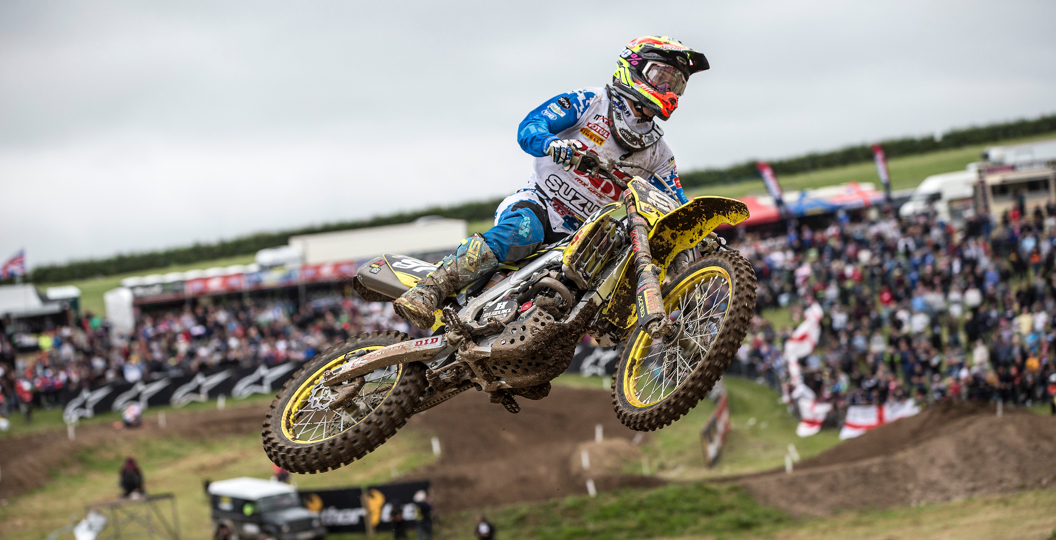 Jeremy Seewer took his factory RM-Z250 to fourth overall today in front of a 37,000 crowd gathered around the Matterley Basin ‘bowl’ for the British Grand Prix and round 11 of 18 in the FIM Motocross World Championship. The Swiss lost only two points in his gap over Pauls Jonass in the series standings and retains a healthy distance of 29 in second place.

Dry, fast, flowing and jump-laden, Matterley Basin was again a special place for Grand Prix motocross and a circuit that Seewer in particular relished. The wide ‘switchback’ turns, many step-ups and downs, a tacky soil that invited riders to attack the terrain and some close racing, were valuable ingredients for a memorable fixture on the 2016 calendar.

Seewer showed his spurs on Saturday by heading the Free and Timed Practice sessions and with current world championship leader Jeffrey Herlings struggling with a foot injury ‘#91’ took his chance to lead the MX2 pack. A small mistake at the beginning of the qualification heat meant that Seewer had to charge back to third place and faced an insurmountable margin to Max Anstie and Dylan Ferrandis ahead.

Lesson learned for Sunday, Seewer had to fire back from a top-six start and needed almost half the race to pass the surprisingly fast rookie Conrad Mewse. Once he relegated the Englishman he made full use of the last three laps to close up to Pauls Jonass and made a fantastic pass to relegate the Latvian to fourth on the final circulation.

In the second moto Seewer again found himself duelling with Jonass and another third place. He made a brave and successful move on the wide ‘spoon’ curve midway through the last lap but carried just a bit too much speed into the rut on the outside of the turn and slipped off the RM-Z. Seewer was able to remount and take fifth but had to surrender a podium finish to Jonass.

Brian Hsu contested his first Grand Prix of the year and was satisfied with 16th position overall. The German was 15th in the first sprint and was clearly missing race mileage but put six points on the board. He added to the numbers with 16th in the second dash.

Matterley Basin staged the seventh round of 10 in the EMX250 European Championship – the breeding ground for MX2 – and saw a confident Bas Vaessen in action with his RM-Z250. The Dutchman faced both motos on Sunday compared to the usual split programme due to the dense schedule. His first outing was restricted by an electrical problem that meant he scored one point for 20th place. Coming back from adversity, ‘#98’ rode the entire second moto in the top five and alternated from third to fourth to fifth positions until eventually crossing the line down in fifth and four seconds behind Nicolas Dercourt. He is third in the championship standings and just eight points ahead of Jorge Prado in fourth.

The Grand Prix of Lombardia next weekend means a trip south through Europe and to the Italian town of Mantova where the shallow sand and compact curves will host round 12 of the 2016 campaign.

Jeremy Seewer: “Almost! I knew I had to pass Pauls for the podium. The top three was not my sole goal because I knew a fourth place was not a disaster, especially in the championship picture. But, of course, I wanted to pass him! I was faster but couldn’t make it happen on the last lap. I got through but the rut was quite high and I couldn’t turn enough. It was a positive weekend. I showed some really good speed yesterday and I think I had the fastest lap-time in the first moto. We still need to work on the start because we have a new issue to solve as I struggled a bit just coming out of the gate. It seems like we have enough power I need to maintain it and really use it. Anyway it was good for the championship. Jeffrey won again and he wasn’t one hundred percent, so I hope there might be another occasion where we can fight and try to beat him this year.”

Brian Hsu: “It is my first proper race, so I was feeling a bit tired already from Saturday and pushing hard in the heat race. I am still struggling a little with my arm and wrist, because I was gripping more with my right side and I have to compensate; it was a tough weekend! I survived though, so I am happy and will work for better.”