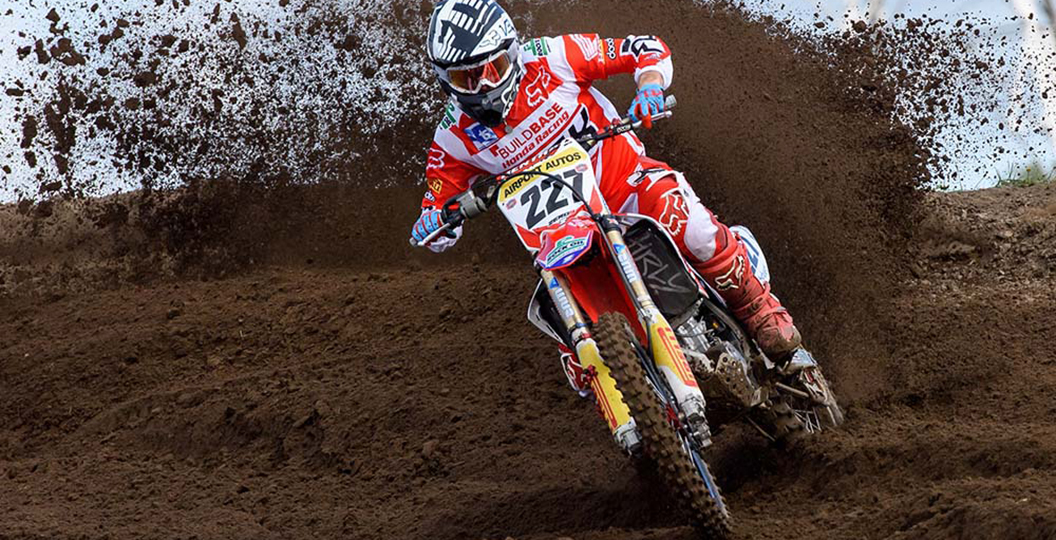 Whatley takes second spot at Preston Docks – 06.09.15 – Buildbase Honda lead rider Kristian Whatley powered his way to second spot overall at the penultimate round of the 2015 Maxxis ACU British Motocross Championship held at Preston Docks. Whatley was the lone representative for the Official Honda UK squad with his Estonian team mate Gert Krestinov having been forced to sit out round seven due to a broken collar bone sustained during a recent training accident. Having undergone surgery to rectify the injury Krestinov remains on target to be back in action for the final round of the series early next month to defend his third place in the general standings.

After having had to deal with his own fair share of injuries this season, Whatley continues to ride his way back to form and produced three strong race results 5 – 4 – 3 to deservedly take the runners-up spot overall behind newly crowned British Champion and recent GP winner Shaun Simpson.

The sandy circuit at Preston Docks as expected got rougher as the day wore on and this was evident from the first laps of the day with the best qualifying times being posted early in the session. Whatley missed his opportunity to put in an initial flying lap and had to settle for seventh pick on the gate.

The opening twenty minute plus two lap sprint proved to be a tough affair for Whatley when he was unable to make an impact on the front runners as he fought the effects of arm pump from almost the word go. Despite this uncomfortable situation Kristian managed to put some of the pain aside and to salvage fifth spot come the much welcomed finish flag.

Some attention to his arms in the interval and a holeshot in the second race of the day put Whatley back nearer the sharp end of the action this time out and saw him challenging for a podium place before he stalled his bike towards the mid part of the moto. Losing time as he restarted his Buildbase Honda machine Kristian vented his frustration with some good closing speed to take fourth spot as he crossed the line on this occasion.

Another holeshot in the third and final encounter of the day saw Whatley race to his best result of the meeting, his third position in the closing sprint being enough for him to claim the runners-up spot overall and give himself a real chance of a top five place in the 2015 rankings if he repeats the same kind of form at the closing round.

Buildbase Honda MX Team Manager David Thorpe summed up the day. “It wasn’t the best of starts for Kristian today both in qualifying or in the first race, but the pleasing thing was that he improved as the meeting went on. It was nice to see our bike holeshot the last two races, and for Kristain to be able to get over his arm pump and put in two strong rides to take second overall come the end of play. Hopefully both him and Gert can end the championship well next month and we can at least have them in the top five after what has been a season of injuries for us.”

Whatley added. “Like Dave said the day didn’t start too well, but I am just happy it got better for the last two races. The bike was strong again today, especially in the starts and they gave me a good chance in the second and third races to get the positions to stand on the box beside Shaun come the finish. Let’s hope we can do the same at FatCat at the final round too.”