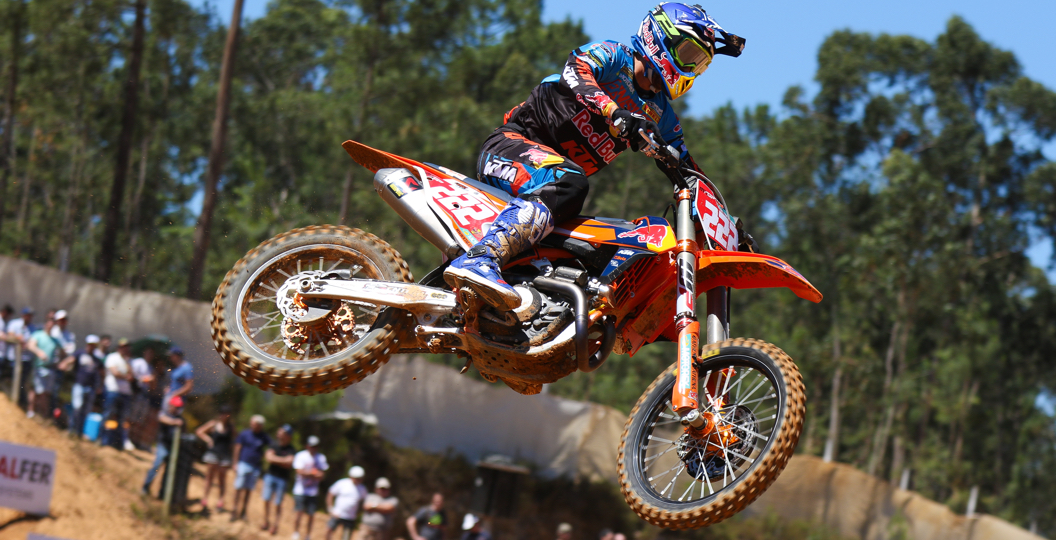 Returning to Agueda, a track that last hosted a round of the FIM Motocross World Championship four years ago, was fairly peculiar. Conditions were far from what most riders expected, but prompted some breath-taking racing and intriguing talking points.

It is honestly difficult to know what point to dissect first, but it is only right that we acknowledge a man who was not even a Grand Prix rider twelve months ago. Arminas Jasikonis has gone from strength to strength since he first joined the Suzuki World MXGP team in Loket last year. There have been flashes of brilliance and raw speed in recent weeks, hence why this victory is not a complete shock, but just take a moment to appreciate where he has come from. Scoring points was an achievement prior to this year!

Jasikonis has led multiple laps this season, but maintaining that pace has proven to be a stumbling block. That is why most presumed that he would hand the lead over to Max Nagl, who was enjoying his best ride in more than a month, when he lost almost two seconds in a single lap. Jasikonis recovered after that and stopped the bleeding somewhat.

Why did Nagl struggle to maintain his charge? The answer is quite obvious, I believe, as Antonio Cairoli was closing at an alarming rate and forced Nagl to focus on what was going on behind him, rather than race forward. Nagl was suddenly worried about defending the inside lines and could not flow as he was earlier in the race. Just how quickly did ‘222’ close in though?

Before we get ahead of ourselves here, back to Arminas Jasikonis. “The start was not great, but at the top of the hill I took the lead,” he recalled in the press conference. “All of the moto I was just riding, but trying to stay calm and not make many mistakes. It was really amazing, but I’m working to make sure that it was not the last one. I’m really happy.

“It was tough for my head, not physically,” he continued. “I had to just reset myself, as I started to make little mistakes. I just reset and again pulled a little gap. I don’t put too much pressure on my shoulders [for tomorrow] – I’ll just try to do what I did today. I’ll fix my start to make it a little better, to really get a good jump and everything. I’ll just do my thing and enjoy my riding.”

The speed that Antonio Cairoli showcased drops him into the position of favourite ahead of tomorrow, but Romain Febvre appears to be on the verge of his first podium of the season. Arm pump restricted the Frenchman in the qualifying heat, as he made set-up changes ahead of the heat that did not work as well as expected, so it is reasonable to expect more from him. It has been three hundred and twenty-nine days since he last stood on the podium.

Glenn Coldenhoff deserves props for a ride that was much better than it may appear. ‘259’ was briefly caught in the first turn after running into Clement Desalle, who slid out on the exit of the corner, and charged to ninth. Most of the competitors struggled to move forward at all and labelled the circuit as one that is tough to pass on, but Coldenhoff seemingly had no issues. Perhaps this will be the start of a resurgence?

Ken De Dycker featured inside of the top ten for a majority of the race, which has not happened in around two years, but a crash destroyed his front brake and forced him to settle for a poor gate pick. Finally, why was Arnaud Tonus buried outside of the top fifteen? A small issue halted his progress, unfortunately, but he’ll be ready to go tomorrow.

The MX2 riders completed their qualifying race before the MXGP class and consequently dealt with conditions that were much more treacherous. The track was watered heavily, which caught Jorge Prado and David Herbreteau out on lap one, but also prompted some alternative lines to be used. That is a point that Thomas Covington discussed in the press conference, whilst reflecting on his impressive victory.

“I felt really good in the first free practice,” Covington stated. “The track has a pretty cool layout and some nice jumps, but it is a slipperier than I was expecting. I got off to a pretty good start in the race, just behind [Pauls] Jonass, and then on pretty much every part of the track I was taking different lines. He ended up making a mistake, so I got by and after that I pushed for a few laps.”

It was not that battle for the lead that caught my eye, however, as a furious fight for seventh raged on slightly further back. Ben Watson and Anthony Rodriguez featured heavily in that and swapped positions on many occasions. Just much did the pendulum swing between the two riders? The table below should give you an idea. Remember to take note of the fact that the equipment that Rodriguez is on is far superior to Watson’s machine!

That battle dominated headlines in the MX2 division, as the rest of the action was fairly mundane. Jorge Prado (twelfth) and David Herbreteau (fifteenth) did well to move through the pack after that crash on lap one. Benoit Paturel and Bas Vaessen faced tougher challenges though, as separate incidents left them half a lap behind the rest of the field and in desperate need of a miracle. Neither rider cracked the top twenty.

That’s all from day one at the Grand Prix of Portugal, an event that most are happy to see back on the calendar. Do you have a question or want to discuss anything about the qualifying heats? Hit us up on social media.