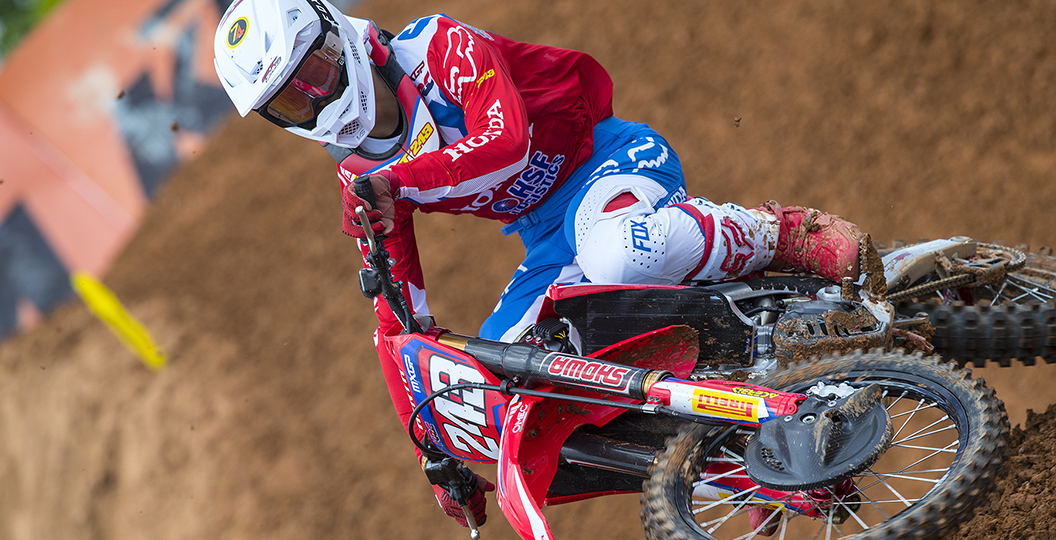 The day has just begun for most of the European fans, yet qualifying at the Grand Prix of Indonesia is already complete. Although this is an all-new event, and there was the threat of thunderstorms, things really went off without a hitch at Palembang. There were no shocks or surprises and it was business as usual for a lot of the contenders.

Tim Gajser dominated the premier-class qualifying heat, which is fairly normal, but the biggest concern for his rivals is that he certainly has more in the tank. Gajser pushed early on, quickly established an advantage of seven seconds and then maintained that to the chequered flag. There were absolutely no hiccups at all, which is not always the case with him, and he was just as nonchalant after his triumph. “Yeah, I am really happy with how today went,” he said in the post-race press conference. “The track is really small and the lap times are really short, so in the qualifying race we made so many laps. Tomorrow, when we have thirty-five minutes, we will make many laps.

“I was enjoying it and having fun,” Gajser continued in his post-race statement. “The start was really good. I think I holeshot, made a little gap and then controlled the race. I was enjoying and hopefully tomorrow we can do the same. It is something new for everyone. To finish the race and go straight to the swimming pool or hotel room, it is nice. The weather is different than in Europe also. There is way more humidity in the air but, anyway, it is good, I feel good and hopefully in the future we can come back here.”

The track was an intriguing addition to the Grand Prix schedule, and very different to anything else that the series will visit this season, but it is short and this was reflected in the number of laps that were completed. The premier-class guys did fourteen laps in total, which is a considerable amount compared to other heats this season. Gajser obviously commented on that above, which was justified, but how about this: The MXGP qualifying race at Teutschenthal two weeks ago ran for thirteen laps, so just one less than today, and the heat at Orlyonok a month ago ran for fifteen laps! The lap times here are still the quickest of the year though.

What is it going to take to stop Tim Gajser tomorrow? Honestly, he may be the only one who could possibly do that. There have not even been any minor crashes lately though and his ride at Teutschenthal resembled that of a masterclass, so even that seems unlikely at the moment. The weather could meddle in the running order at some point, admittedly, as forecasts still call for thunderstorms in the afternoon, but it is tricky to predict whether that will surface or not. It is so unpredictable here. Similar storms were forecast for today, but there were just a couple of downpours in the end.

If fans want to pick a rider who could run with and beat Tim Gajser, it is tough. The Yamaha riders were not quite on the pace throughout the day, although Gautier Paulin did top a rain-shortened session earlier on, so perhaps Max Anstie is the guy? Anstie blew past Arnaud Tonus in an impressive move in the waves, then caught and passed his teammate, Glenn Coldenhoff, before settling into second in the qualifying heat. Anstie only missed out on the fastest lap of the race by a tenth as well. There are a lot of factors that would need to go right there, but it is an intriguing prospect.

There is one more point to consider when discussing Tim Gajser. Although he was fairly dominant on every portion of the circuit, he did not hold the fastest time in sector three at all throughout the day. Sector three begins at the base of the jump after the longest set of waves, then concludes at the landing of the big triple that sits in front of the grandstands. Romain Febvre actually had the quickest time there in the qualifying heat, closely followed by Anstie, then Gajser was a couple of tenths slower when at his best. What does that mean? Not much, truth be told, but it just shows that Gajser could be even stronger.

Perhaps the most interesting question to bench race about currently is who will be beaten first, Tim Gajser or Jorge Prado? The pair are in similar positions currently, simply because they appear to be untouchable. Prado was commanding in qualifying and is eager to repeat that performance tomorrow. “Today was pretty good,” he started. “I had a very good start and that was the key of the race, because it rained just before the qualifying race and the track was quite muddy for us. Some inside ruts were full of water. I was riding pretty much half of the race without taking any risks.

“The track was getting better and better, so it was fun,” Prado continued as he reflected on the battleground that he will tackle tomorrow. “This morning the track was super fun. The lap times are very, very short and it is a very tight track. It is something different and we will see when we do thirty-five minutes tomorrow. The good thing is that we do not have so many lappers here, which is good for a track like this.”

Mitchell Evans was pushing Jorge Prado very early on and seemed to have enough to match him, but then tailed off in the middle. It was actually Prado who forced that, as he logged a couple of lap times that broke the competition. The fifth lap marked the point where he set the fastest time of the race, then he improved on that on lap six and managed it again on lap seven. It was not overly surprising to see things progress like that, as one of the aforementioned showers occurred just before the MX2 heat and consequently parts of the track were slippery. Evans, Thomas Kjer Olsen and Tom Vialle also set their best times on lap seven.

It was well-documented that Evans was uncertain whether he would be able to ride at this Grand Prix, after that vicious hit at the previous event, but he is obviously here and competitive. There is no way that he can be pegged at one-hundred percent though, as he has a haematoma on his back that is rather gruesome. A good start obviously goes a long way though, so that helped significantly in qualifying today. It is also worth noting that his teammate, Zachary Pichon, crashed early on in the qualifying race and battled up from dead last. Pichon only beat one Grand Prix regular, Henry Jacobi.

A crash was the reason behind Jacobi finishing eighteenth and going a lap down to the polesitter, which is hardly surprising, but he was not the last European in the final classification. Andrea Adamo did not manage to finish a lap in his MX2 debut, as he crashed out and returned to the paddock, and Richard Sikyna was hit by a mechanical issue after a strong showing early on. Those two will start on the outside tomorrow, which means that the sole representative from Indonesia will head to the line in nineteenth. Delvintor Alfarizi has qualified better than that at the last two Grands Prix in Indonesia though, believe it or not.

Calvin Vlaanderen is another contender who is not quite at his best, following a recent injury, but qualifying was a positive sign. Vlaanderen claims that he took it easy during the practice sessions, hence why he went to the line in eleventh for the qualifying heat, but then rocketed out of the gate and almost got the holeshot in his first Grand Prix race since the fifth round back in May. Although he was shuffled down to fifth by the third lap, he held his ground there and put in a consistent showing. There is nothing wrong with that! It is interesting that he only set the ninth-fastest time though.

“Obviously I have really good memories from last year when I got my first overall win in Indonesia, so it’s good to be here,” Vlaanderen said in a team statement. “I’m actually very happy with how today went. I took it pretty steady in free practice and timed practice and then had a great start in the qualification race, almost grabbing the holeshot. I got passed by a couple of guys after making some small mistakes but I tried to follow some lines and ride a smooth race until the finish line. I didn’t have too many expectations coming into the weekend but I’ll be happy with two more good starts, some solid riding and just building up my levels.“

Ben Watson slots into a similar category, as he is dealing with the metacarpal that he broke two weeks ago. Watson only completed a total of thirteen laps in the practice sessions and later admitted that he is riding in a lot of pain, which makes his tenth place in qualifying even more impressive. “On Saturday morning in Germany I crashed, went off the track and hit a square mound of dirt,” he said in a post-race statement. “I went over the bars and had a hairline fracture in my fourth metacarpal and snapped my fifth metacarpal. Sunday morning I directly took surgery and had a plate put in to stabilise it, then the two weeks since then I just took it easy. I have been very careful not to get an infection or something in the wound.

“Today was the first day back on the bike,” Watson continued. “It was only thirteen days since the surgery, so I cannot expect too much and, I’ll be honest, I am riding in a lot of pain, so to finish tenth in the qualifying race I was satisfied. I am lucky we are here in Indonesia, because there are not so many riders. I still have a goal for the championship and I don’t want to see that just go away. If I was sat at home now with my hand I would say, ‘I can ride.’ I am still happy that I am here, even if I am struggling a little bit. I just want to take as many points as possible, not do anything stupid, stay consistent and keep plugging away. Hopefully after these two weeks then back in the Czech Republic I will be one hundred percent.”

It is tough to predict what the Grand Prix of Indonesia is going to bring tomorrow, although one could have a very good guess. The battles at the head of the pack may not get the heart racing, as the polesitters seem to have everything under control, but there is plenty to observe further down the field. Anyway, what if it rains?