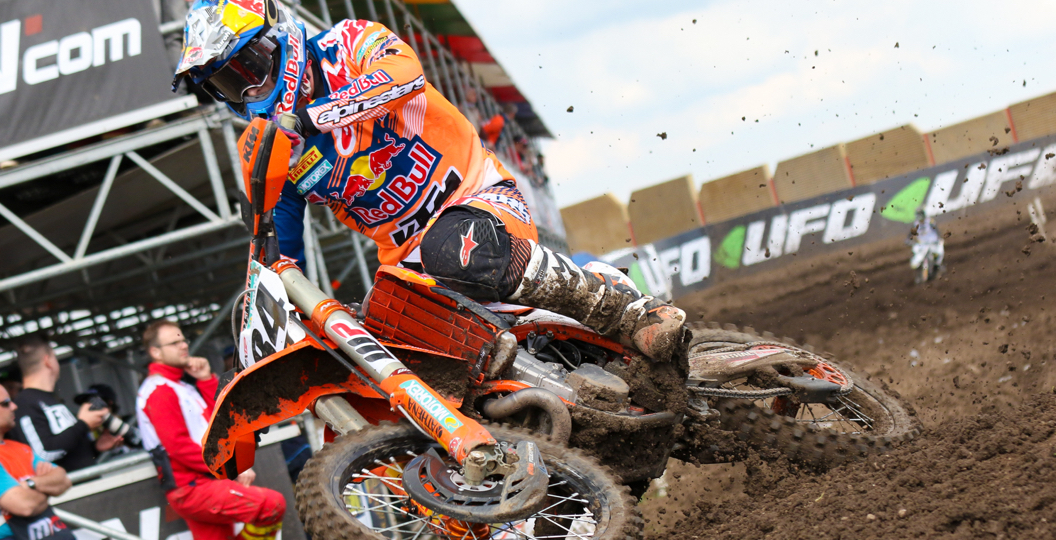 Antonio Cairoli and Benoit Paturel romped to impressive victories during the two qualifying heats at the Grand Prix of Germany earlier today, but neither rider hogged headlines. Intriguing stories were rampant throughout each class, following some exciting racing, so there are plenty of talking points to cover.

Cairoli won at this venue last year, in what was a dominant showing, and executed a similar ride on the battleground today. A methodical race saw him take advantage of a mistake from Tim Gajser and then manage his advantage over the rest of the pack. Things tightened up towards the end, however, as Jeffrey Herlings executed his new strategy.

In interviews on MX Vice, Herlings has stated that he would like to mirror the way that Eli Tomac attacks a race. Rather than sprint in the early laps, like he would often do in the MX2 category, he would like to pounce whilst his competitors are beginning to tire at the end of an exhausting heat. If you take that into account, his lap times from the second half of the qualifying heat make perfect sense. We have laid it out for you below, which is much more convenient, but make note that Herlings also faced traffic during this period.

There is one fault that Herlings still needs to correct though, unfortunately, and that is that he simply cannot start with his competitors. The way that he started in Latvia can be pushed to one side, as the layout there massively favours the inside and his jumps were mediocre at best each time. ‘84’ occupied the first gate again today, as you would expect, and then got swallowed up immediately. That will stop him making a dent in the deficit that he currently faces.

A Monster Energy Yamaha Factory Racing battle raged on behind Gautier Paulin in third, which was most entertaining. It was just one year ago, at this very venue, that they squabbled on the starting line. Jeremy Van Horebeek rode an extremely defensive race, as Romain Febvre was chomping at his back wheel for the whole twenty-five-minute moto.

It was Febvre who was undoubtedly the most impressive, as this was a return to the front for the former champion. Febvre has not been this close to the leader in quite some time and he looked comfortable whilst doing it, which has also been a problem. ‘461’ made significant setup changes in the week prior to this weekend and, based on today, they worked. Let’s not jump the gun just yet though.

Those in the lower half of the top ten were stagnant for much of the heat and took advantage of that crash that Tim Gajser had to gain positions. Shall we cover that? It was obviously another odd one, but he will be ready to go tomorrow. ‘243’ had to get checked over the doctor following the race, as he hit his head, but everything is okay and he will be on the line tomorrow. Will he be able to cut into the seventeen-point deficit that he currently faces though?

If you are looking for a better idea of how bad his crash was, Antonio Cairoli stated post-race that “he hit the ground very hard. It is never nice to have someone crash in front of you.” Tim Gajser himself stated that he “made a mistake, which caused me to crash and then I just couldn’t find my rhythm,” in a HRC press release. “I felt really sore from my crash a few weeks ago,” he continued. “I am looking for a better day in racing tomorrow.”

In more HRC news, Evgeny Bobryshev is expected to miss around six weeks with a broken collarbone that was sustained during time practice. That, unfortunately, means that he would need a small miracle in order to line up at the Grand Prix of Russia in three weeks. It seems that Bobryshev will require surgery on the injury quite soon.

Although it may look like Benoit Paturel stormed to a qualifying-heat win in an impressive rebound from some lackluster finishes, he actually dropped back to fourth at one point. Both Thomas Covington and Thomas Kjer Olsen crashed out of the lead, however, so that helped him progress. To his credit, he did pass Pauls Jonass straight up after initially losing ground. Whether his starts will continue to be this good or not remains to be seen, as we have such a small sample size, but we may have another contender on our hands if he can manage it.

Anyway, just as I said in the introduction, it was not Paturel who was the real story in the MX2 division. Thomas Covington has quietly been brilliant lately, but no one seems to have noticed as the odd mistake often restricts his finishes. He was clearly the best rider again today, there is no doubt in my mind about that, so keep an eye on him as we roll into the two motos. A win here would be rather large for him, as he has not yet won an overall on European soil. Oh and, by the way, it was a small crash that restricted him to fifth at the finish.

Who else caught my eye in MX2? Michele Cervellin obviously deserves props for his impressive finish, a fourth, in qualifying. What was the reason for the sudden turnaround? Following a lengthy fight with a hand injury, he is finally over the worst of it and can get back into a normal routine (or at least something close to that). Hunter Lawrence was brilliant too, as he moved from eleventh to sixth! Lawrence needs a good start, like so many others, to show what he can really do, but I have no doubt in my mind that it’ll all come together in the form of a podium finish eventually.

Onto race day at the Grand Prix of Germany, where the track should be very similar to what we have experienced here in the past. No more rain is forecast at all, thankfully, so we can push all the talk of a mud race to the side!