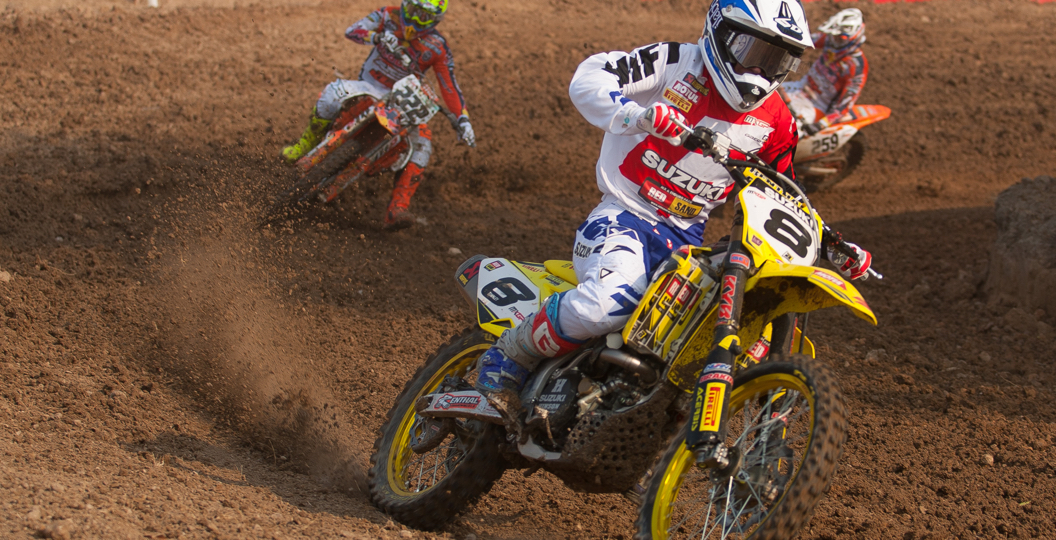 What started off with some fairly mundane practice sessions soon turned into a controversial affair, thanks to a truthful assessment of the Suphan Buri track by MXGP pole-sitter Ben Townley. Before we get to that, however, a rundown of the key events from the qualifying heats at the GP of Thailand.

When analysing the MX2 class, most tend to skip past the fact that Jeffrey Herlings won in a convincing fashion. Foregone conclusions aren’t exactly fun to bench-race about, are they? Anyway, Jeffrey deserves kudos for the way that he performs in conditions such as this. He landed in Thailand at midday on Friday, had two or three hours sleep last night and still didn’t look at all tired after handling the field.

This is quickly going to become a common occurrence, it seems, as Dylan Ferrandis is out with a dislocated shoulder. With that in mind, I’d put ‘84’ down for a brace of wins tomorrow with an advantage of around forty seconds. Dylan, his main competitor for the title, will head home as soon as possible and have the injury seen to, with the aim of returning at Valkenswaard. It is a cruel blow for him, but if the past two years are anything to go by he may not be out of the title hunt just yet.

When questioned on Ferrandis’ injury, Herlings was quick to point out that he made some dumb moves one round ago. “I must say, last weekend he didn’t really play it safe. We both came back from injury, then we already touched in the first moto of the year. I wouldn’t say he wanted to clean me out, but at least we didn’t’ have to touch. I overtook him pretty nice, then he tried to run into me. We all want to win, so it is a shame that one of our riders went down today.” Unfortunately, we won’t get to see that rivalry develop until the end of the month.

Benoit Paturel, Max Anstie and Pauls Jonass are perhaps the riders to keep an eye on in MX2 tomorrow as potential spoilers; they filled positions second, third and sixth in the qualifier. Jonass stated that he dropped back to sixth in order to save something for tomorrow, but it would honestly be a surprise to see him go the full distance. On the other hand, Paturel and Anstie moved forward after ending lap one fourth and seventh respectively.

Other notable points that emerged from MX2 include Samuele Bernardini having the second fastest lap of the race – he held that spot for four laps too. The Italian eventually faded to eighth, which is consistent with what we have seen from him in the past. Thomas Covington battled food poisoning to finish tenth in the heat also, but is hoping to feel better tomorrow and capitalise on his prowess at these overseas races.

Onto MXGP then, where Ben Townley stole the spotlight both on and off the track. The New Zealander got pinched off entering turn one, but was able to turn tight and come out around third before bumping his way into the lead in turn two. ‘8’ never looked back from that point on, despite considerable pressure from both Romain Febvre and Antonio Cairoli, but did later admit that he perhaps pushed too hard. Whether this will become apparent towards the ends of the motos tomorrow remains to be seen, although you would think that he will be better equipped to handle the humid conditions than some of his European competitors.

After pointing to his mechanics along pit lane in celebration, throwing a big whip and beaming with delight in a TV interview, Ben got a little more serious in the press conference. “Coming to these tracks, they are just not good enough. You’re going to hear honest and open from me, Qatar and here isn’t the pinnacle of our sport. We are the MXGP, the best riders in the world, and these guys can’t sit here and honestly say it is an amazing place to ride a motorcycle. We are in a flat paddock in the middle of nowhere.

“I tried to get a GP in New Zealand and we would have been there this weekend or the following weekend. You guys would have the best event on the entire calendar if you came to New Zealand. That is where the culture shock is for me; to be here and in conditions like this. This, in my opinion, is not good enough for the sport. I’m glad I got the opportunity to say that here today. We get told to not put the sport in disrepute, but this is the best championship in the world. I think that it deserves better.”

The flyaway races have obviously been a source of debate for many over the years and most riders did point to the fact that the Suphan Buri circuit is a major improvement over what we had in Thailand last year. Ben obviously didn’t race that event, so couldn’t make the same comparison. Will his outburst cause others to make a similar stand? There was, what seemed to be, a rather serious meeting involving the riders earlier this evening regarding track conditions, so it’ll be interesting to see what changes have been made for tomorrow’s schedule.

Giuseppe Luongo held a press conference following the one that featured Ben to announce that MXGP will be heading to Indonesia in 2017, 2018 and 2019. He also took the opportunity to voice his opinion on what the New Zealander had to say; “I am very disappointed. It is not the way for a professional rider to talk in a press conference like this; I never say something when a rider finishes fifteenth, sixteenth, eighteenth or twentieth place, because it is not fast.

“The people here make a big effort to make the track. The weather conditions are very hot; in Thailand it is very hot. The riders know it is very hot, they have to come here prepared for this kind of track. If they want to be world champion, they have to show they can be fast everywhere. The people on the track work day and night to make it the best condition and, frankly, the track is much better than last year.

Anyway, Febvre was very fast behind Townley but a big mistake towards the end stopped him from mounting a serious charge through the closing laps. After that he settled for second, but I would put him down as my favourite for tomorrow based on what I saw today. Antonio Cairoli showed speed too, but may struggle to go the full distance seeing as he is not one hundred percent. Remember, temperatures will hover around forty degrees again tomorrow.

Max Nagl has had a quiet start to the season, but could surprise if he gets a start. The German was one of the only riders moving forward in the race and eventually crossed the line seventh. “If only he could get a start” is something that could be said about a lot of riders, like Tommy Searle for instance. ‘100’ made a mistake towards the end, which cost him some spots, but he was battling for eighth before that. The Monster Energy DRT Kawasaki rider eventually finished twelfth, just behind Evgeny Bobryshev and Glenn Coldenhoff. Both of those riders crashed early on, but recovered well.

The focus shifts to race day now, where ‘survival’ is a key word that has appeared multiple times in various conversations. Some typically struggle at hot and humid races, like Tim Gajser and Evgeny Bobryshev, whilst others thrive, so it’ll be interesting to see if those patterns continue or some guys manage to break the mould.