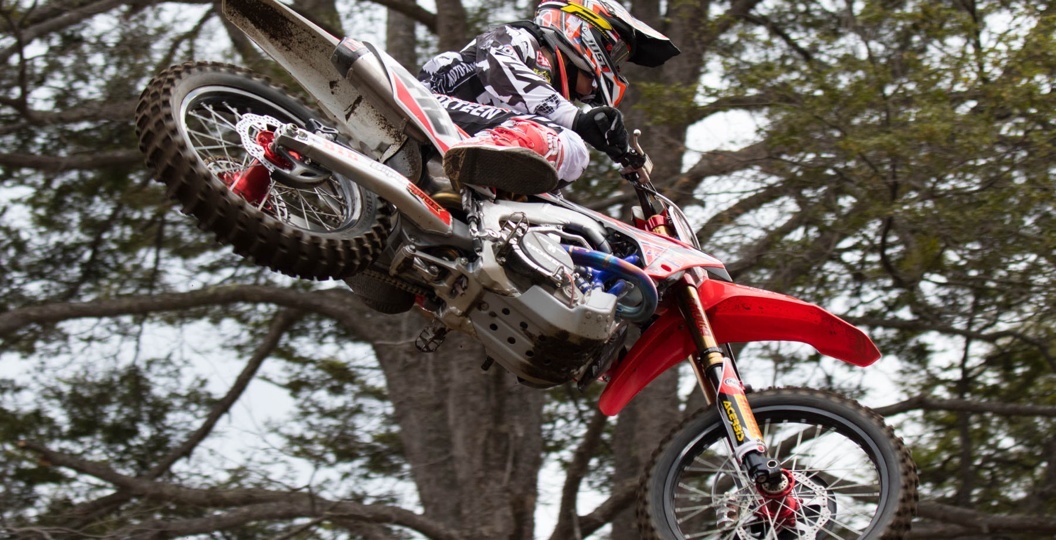 It is hard to pinpoint what was more spectacular on day one of the second successive Argentine GP. Was is the facility or the racing? Two fairly mundane practice sessions left most wondering whether the races would churn out too many surprises, but the action in the MXGP heat will go down as one of the more memorable encounters of the season.

The track had a major part to play in this, as the fast, flowing nature of the Neuquén circuit creates so many options for the riders. The element of surprise becomes a factor as a rider is chasing down the guy ahead, which results in intriguing scenarios. Jeffrey Herlings confirmed post-race that the track is indeed as good for racing as it looks, as he stated that “it is a really wide track and a fantastic location. We have a lot of options to pass, so the start is a little less important.”

One of the sections where time is either won or lost is the first set of waves. You could either go on the inside of the corner prior to the section, which meant you would bounce through the first couple, or you could enter from the outside and double your way through. The inside, surprisingly, appeared to be faster and consequently became the more popular option. Febvre was one of the strongest through there, whilst others struggled to maintain momentum.

Jeffrey Herlings won the MX2 qualifying race. No more needs to be said about that, right? Jeffrey actually had some interesting things to say post-race about his plans for the immediate future and next year. When these flyaway events are back-to-back, there are a handful of ways to tackle it. You can fly home and spend a couple of days in Europe or just travel straight to your next destination, then spend a week acclimatizing. A majority of riders would rather do the latter, but it seems Herlings isn’t afraid of long-haul flights.

“Since I dislocated my hip and broke my femur it has been hard to do things other than cycling, mountain biking, swimming and riding,” said Jeffrey. “They are kind of the only things I can do. Going to Mexico I don’t have a cycle, I don’t have a mountain bike and I don’t have my practice bike. We managed to find some good flights home, so I can be home already on Monday evening. I will be flying back on Friday, so it will give three or four days at home to train, ride and do whatever. Yeah, it’s like that.”

Even if the extra travel, which I’m sure very few would be willing to sign up for, puts him at a slight disadvantage, it won’t make a difference; he is too superior. Twenty-five seconds was his margin of victory when the moto concluded, which means he was faster by a second a lap on average. Not bad, huh? I still get the impression that he has so much more to give too.

Jeffrey put himself on the inside, after acquiring the first gate pick, which was the safest option. It is a pretty fair start here, honestly, as Aleksandr Tonkov took the holeshot from the sixth gate on the inside. Tonkov was actually quite impressive, but that really shouldn’t be a surprise. Valkenswaard was mediocre for him, sure, but he was ill there. Entering the third round he was second in the championship, so there is no reason to think he won’t be a consistent podium contender from this point on.

The Wilvo Standing Construct Yamaha rider dropped to fourth at the finish though, as he gave way to a hard-charging Pauls Jonass and Max Anstie. Pauls did what we expected him to, but this finish indicates that there is light at the end of the tunnel for Max. Anstie supposedly made major gains with his bike set-up prior to Valkenswaard, but we didn’t really see any improvement there as the cards were stacked against him. ‘99’ ran as high as second in this one, but just lost out to Jonass towards the end.

The MX2 race was fairly uneventful, in comparison to the action-packed MXGP qualifier, but there were some notable results. Vsevolod Brylyakov caught my eye, as he had speed that would make him competitive with those in the top five. The Russian has never struggled with raw bursts of speed, but he just needs to harness that. The same could be said for Samuele Bernardini, as he charged forward in the early stages, started to ride defensive, got tired and dropped all the way back to ninth! You can work with speed, I guess.

Jorge Zaragoza looked good all day, also, but had a hard crash at the halfway point. The Gariboldi Honda rider was seen limping towards the medics following the race, but it seems a swollen knee is all that he had to contend with. He’ll be ready to go tomorrow.

Onto the MXGP qualifying heat then, which was far from uneventful. A trio of KTM riders got out front early, but some quick moves on lap one saw Tim Gajser and Romain Febvre hold the top two spots after just half a lap. Cairoli, who initially took the holeshot, stayed in the hunt though and passed Febvre back. You could have chucked a blanket over the three riders at one point, but then Tony fell exiting a corner and Febvre ran straight into him. The two ended up in a heap, but eventually got away in seventh and eighth.

Gajser used this to his advantage, as his lead suddenly grew to five seconds, but he didn’t maintain that and felt heat from Jeremy van Horebeek and then Febvre again towards the end. Gajser attributed this to the fact that he tightened up. “With three laps to go I got a bit of arm pump, so was riding too stiff and didn’t find the best lines,” he commented. “Anyway, I managed to win the race.”

It wasn’t just those last three laps where Tim lost ground, however, as the times show that he was a little off the pace from the halfway point on. Febvre was consistently the fastest man on track, despite the fact that he was fighting his way through traffic, and van Horebeek was shaving off a tenth or two per lap also. Does this bode well for Gajser tomorrow? You would think that the start will dictate whether he can replicate this performance.

No matter what position he occupies as the field charge into turn one, ‘243’ will have his work cut out with Romain Febvre. I wrote an article a week or two ago about the fact that Febvre has had his defining moment now, and he continues to cement his position as ‘the guy’ with rides like the one today. Had there been an extra lap, I would say he would have won the qualifier. This is dangerous, folks, as he is extremely close to breaking away from the rest of the field.

Max Nagl finished a quiet fourth, just behind Jeremy van Horebeek, but was running a pace that could put him in contention for a win tomorrow. A fact that should not get overlooked here is that the German had an awful start, as he got squeezed out just moments after the gate dropped. Starts were his kryptonite through rounds one and two, as we know, but he never quite moved forward in a fashion similar to this. It is something worth bearing in mind as we enter the two main motos.

Cairoli rebounded to finish fifth, which leaves me questioning where he is actually at when it comes to his conditioning. His practice times were mediocre at best, you see, but then he turned that around when it was time to go racing. You have to think he’ll finally make a trip up onto the box for the first time tomorrow, right? It is long overdue.

Right, what I really want to see tomorrow is Tommy Searle and Kevin Strijbos round turn one at the front. I think we would all be pleasantly surprised at what they can do, but that speed is going unnoticed as it is wasted whilst battling mid-pack. Searle was a bike length or two down on his competition entering turn one today, but rebounded nicely after a relatively slow start. The potential is there with these guys; they could make the race at the front even more interesting.

Clement Desalle is not far off of doing that, as he seems to be nearing one hundred percent a little sooner than even he expected. ‘25’ was buried at the back early on in this one after crashing with Evgeny Bobryshev, but charged forward to ninth and had the fifth quickest time of the race. The fact that he was willing to push forward shows that he is feeling much better, both physically and mentally, as we wouldn’t have seen that in rounds one and two. Bobryshev chased Clement through the field after hitting a tree root on lap one, but couldn’t quite break into the top ten.

The focus now shifts to the motos that pay points, where most will be praying for action similar to what he had today. In order for that to happen, we need to hope that Romain Febvre and Jeffrey Herlings don’t take the holeshot in their respective classes.