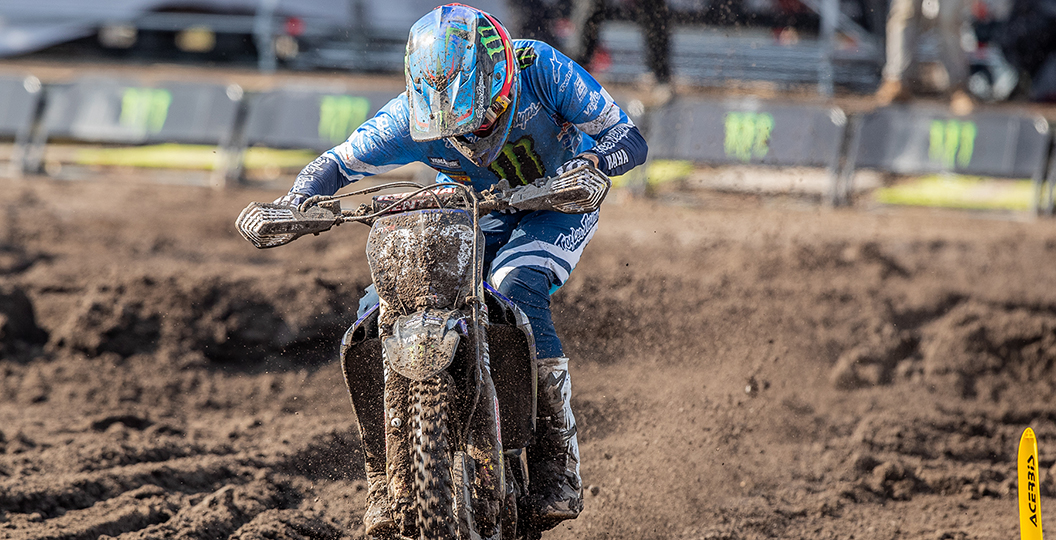 Valkenswaard should technically be one of the least entertaining stops on the Grand Prix schedule, as there are certain riders who are expected to rise above and dominate in the shallow sand. However, despite that, the event seems to deliver year after year with incredible racing. That is already the case this weekend, and there is still a full day to go!

Jeffrey Herlings started the day by going more than a second quicker than anyone else in the class, but that advantage dwindled as the day progressed. He was not even the best guy in the qualifying heat! Who would have predicted that? Herlings blamed the fact that he had arm pump on lap two, because he failed to warm up correctly, and then said that his suspension was too stiff for the track that was considerably slower than normal. Although some sections were dry, other parts were still a quagmire late in the qualifying heat. It is unlikely to improve tomorrow.

“You know, I was fastest in both practices,” Herlings said. “Arminas [Jasikonis] was pretty even this morning. In time practice I had to make a few attempts to get to pole position. I didn’t really do any endurance training, just one lap and then I either went into pit lane or didn’t ride. I didn’t really warm up too good and then in qualifying I got straight into arm pump on the second lap. I think my suspension was a bit too hard. We didn’t expect the track to be… I don’t want to say it is bad, because it is actually really good. It is really slow, because of the rain we had, and more like an enduro right now. I think my suspension was a bit too hard. Overnight we are going to make some changes and hopefully we will be a bit better tomorrow.”

It was Arminas Jasikonis who toppled Herlings, but it is not like he grabbed the holeshot and sprinted away. Jasikonis actually started behind Herlings, passed him, got passed back and then pipped him at the end. It is no surprise that Jasikonis had that speed under the bonnet – he was just as fast last year but lacked race craft. Perhaps this is a sign of just how much he has improved from one year to the next? This is the second time that he has clinched pole position in his career. The last time being in Agueda, Portugal, two years ago – that actually led to his first (and only) Grand Prix podium.

“Yeah, it has been a long since I won a qualifying heat,” Jasikonis said. “Of course, this is just my second one. I am really happy that the hard work has paid off already. It was a really fun race. It has been a big mix up, and some battles, but overall of course the track is not the easiest one and quite rough. There are many mistakes coming there. Still, it is possible to ride quite good and I am happy about that. Let’s see how we do tomorrow.”

One cannot assess the premier-class action without giving a nod to Tim Gajser of Team HRC, who exercised his sprint speed early on in the heat and appeared to have it on lock. A freak bike issue, later described as an electrical problem by the team, forced him to grind to a halt though. Gajser actually got extremely lucky, as the CRF450RW appeared to die on the face of the finish yet he somehow rolled to a stop rather peacefully. It could have been catastrophic. The problem is that he will now have the thirty-third gate pick, something that guarantees he will start out of the top twenty and lose significant points.

There were a lot of riders who impressed over the course of the twenty-minute heat. Jorge Prado continued his rapid progression, Pauls Jonass reminded everyone that he can contend, and Shaun Simpson hit the top five for the first time as a team owner. Simpson showed solid speed throughout the race and flew past Glenn Coldenhoff seconds before the finish, as the Dutchman crashed right at the line (after an altercation with Jonass) and had to settle for sixth. Jeremy Seewer salvaged a seventh after losing his goggles early on. Harri Kullas also deserves a mention for charging to fourteenth.

In other news, Calvin Vlaanderen withdrew from the heat with electrical issues. Adam Sterry immediately exited the track after that same first turn crash but has confirmed that he is okay to race tomorrow and is just a bit sore. Both guys will struggle to start much better from the far outside. Thomas Covington did not even take part in the qualifying heat, following a tough time of it in the timed sessions. It sounds like he’s not going to race tomorrow and may skip the Grand Prix of Patagonia-Argentina in a couple of weeks. There will be more on that on MX Vice shortly.

Onto MX2, where things were just as crazy. Jago Geerts took a clear victory from start to finish – tomorrow will be the first time that he has started from pole position – and proved that he can cope with the pressure that the red plate brings. Tom Vialle was not too far behind in second but settled for that spot around the halfway spot. Bas Vaessen was undoubtedly the most impressive guy as he stormed into third and did not look out of place at all. In fact, he actually pushed Vialle for second towards the end and was seven seconds up on Rene Hofer in fourth.

Roan Van De Moosdijk dealt with some arm pump en route to fifth and admitted that he did not push too hard over the course of the moto. Fellow Kawasaki rider Mitchell Harrison was very impressive in tenth – a result that no one expected given the conditions. Harrison did get bumped a spot when Ben Watson, who actually finished in ninth, got docked five positions after failing sound control right after the race. That will be costly when it comes to gate pick tomorrow. Mathys Boisrame received the same penalty and will start from nineteenth in the points-paying heats.

Thomas Kjer Olsen did not finish after hitting the dirt on lap six but has since confirmed that he is fine and ready to salvage some points tomorrow. Thirty-fourth is where he will start from. Olsen actually mentioned that he does feel the pressure this term, seeing as he has been labelled as the title favourite by some. Even further towards the outside will be Alberto Forato, who also crashed hard but escaped unscathed. Stephen Rubini is not expected to race tomorrow after being taken away in an ambulance with what looked like a rib injury.

That is all from the first day at the Grand Prix of The Netherlands! Things could change considerably by the time that gates drop tomorrow, as rain is forecast for a lot of the day. The track is still in need of some sun and could turn into a quagmire quite quickly if it the rain comes down. Is this event about to get even more unpredictable? 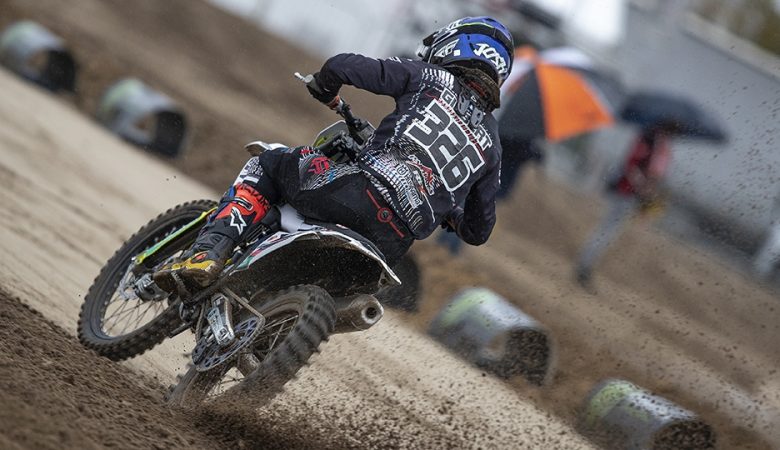