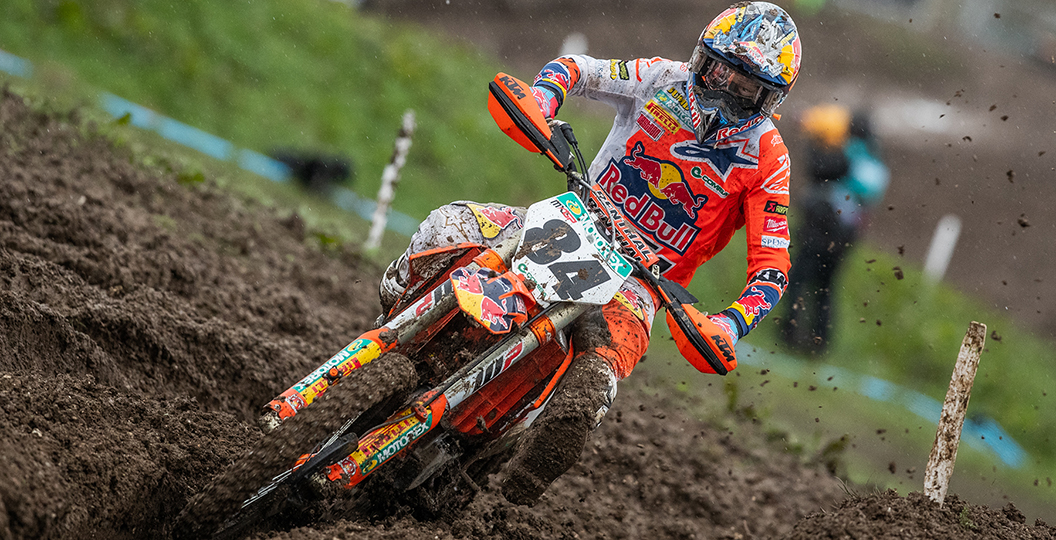 It was not the smoothest start to the 2020 FIM Motocross World Championship, but the season is officially underway following the abbreviated qualifying programme at the Grand Prix of Great Britain. Strong winds threatened to halt proceedings, as the structure that sits behind the starting line was overturned overnight, but things kicked into gear halfway through the day.

Rather than run the normal programme, a single session was run for both the MXGP and MX2 classes that included free and time practice. It was just thirty minutes, so nothing compared to what the Grand Prix contingent are used to, but that did not seem to alter the results much from what was expected. What did play havoc with proceedings was the hail and snow that fell from the sky in the MXGP session. It was a real game of strategy as some opted to log a time on the very first lap, before the circuit deteriorated too much, and others waited to see if the storm would pass.

It never did. That is why the most laps a rider did in the session was six. The polesitter in the division, Tim Gajser, actually only completed three laps and went his fastest on the third. That was the latest anyone set a quick time, with the exception of Tanel Leok (who did his on the sixth). Leok was down in thirty-fourth though and clearly grappling for some kind of progress. The fact Leok was just behind Iker Larranaga, Kevin Strijbos and Adam Sterry speaks volumes about the depth in the category this year. There really is no weak link in the class, aside from Zimbabwean Jayden Ashwell.

Tim Gajser setting the fastest lap time was not too much of a shock, based on pre-season form, but he was fairly nonchalant about it in the post-qualifying press conference. “Really crazy conditions out there made things very tough, but of course I am happy to post the fastest lap time and get first gate pick,” Gajser said after the race. “Hopefully the track will stay dry and I think if that happens, we can have some good races. I am just looking forward to going racing again and getting this season started in a positive way.” That was actually the first time he has won a qualifying race since he became a three-time champ.

Whilst Antonio Cairoli and Jeffrey Herlings opted to start their pre-season preparation later and have boldly claimed that they are willing to settle for top-five finishes to start the term, the common consensus is that Gajser would want to make a statement in his role as the defending champion. One could make a case for the fact that he has not received the respect he deserves, seeing as he has taken two of the last four titles, but that could change quite quickly after tomorrow. Claiming some initial momentum would go a long way, no one can deny that. People are fickle.

Henry Jacobi was undoubtedly the standout in the premier division. Although he was a solid guy in the MX2 class one year ago, no one had him pegged as a 450F specialist or thought that he would make much of an impression in the class. The first pre-season race that he did compete at did a good job of tempering a lot of expectations, as he really struggled and confirmed some doubts, but he has improved significantly since then and shown an element of consistency. Perhaps he could be a surprise package in the races tomorrow? Keeping it upright for two motos would probably be a tall order though.

Calvin Vlaanderen was equally as impressive in tenth, especially considering that expectations were rather low after a knee injury kept him off the bike in January. Vlaanderen only did one pre-season race, LaCapelle, and struggled, so to set the quickest time in free practice (take it with a pinch of salt) and then put the bike in tenth in time practice is rather impressive. One would forgive him for being cautious too – the lengthy ruts could play havoc with pre-existing knee injuries. It was just one session, sure, but there is something to be taken from it.

There is a chance that some were not putting too much emphasis on qualifying positions today, as the start at the Grand Prix of Great Britain is one of the fairest on the calendar. Remember the muddy Motocross of Nations back in 2017? Max Anstie got the holeshot from the middle of the gate, and there is no doubt that would have been thought about by most riders and teams. It is not like Mitch Evans will be stressing about going in with the eighth pick, but Romain Febvre is probably not too stoked about heading to the line in twenty-fourth. Febvre did not set a good enough time before the rain set in.

Kawasaki fared much better in the MX2 qualifying heat, as the F&H team had both Mikkel Haarup and Roan Van De Moosdijk at the top of the board. Haarup emerging as the polesitter was eerily similar to what went on when the FIM Motocross World Championship last started with a mudder. Gautier Paulin, who was then a Bud Racing Kawasaki rider in MX2, took a surprise win at the opening round in Faenza in 2009. Paulin had not even finished on the podium before that point, but really used the mudder to catapult his career. Could Haarup do something similar tomorrow?

“The track was really difficult after all that rain,” Haarup stated. “I honestly didn’t expect to do so well but I think everyone was a little tense for the start of the new season. I just tried to relax. My Kawasaki was working so well, and I could put in those two really good laps. There are some big jumps out there and you had to be very cautious not to cross-rut on the take-offs, but I think our class was the luckiest as it started to rain again as soon as our session finished. Hopefully it will be a little drier tomorrow and I’m really looking forward to the two GP motos.”

All of the MX2 title contenders had a turn at the front at some stage. It seems as though people are already forgetting that both Thomas Olsen and Ben Watson suffered hand injuries in recent weeks though, so they are being judged unfairly. It was a solid start for both guys, in conditions that were hardly ideal considering, and it should not be a problem for them to salvage good points tomorrow. Mathys Boisrame is also coming off of a hand injury and immediately impressed. Context is a valuable thing when analysing results.

The fact that the MXGP and MX2 riders did not get to race today, of course, but that will only make the motos tomorrow even more exciting. There is still no way of guessing what is going to happen! If the forecast is to be believed, conditions should be good tomorrow too. Everything is lining up perfectly! One thing that is not going to work out though is the inclusion of a Sky Box. The structure has been written off after the storm on Friday night and therefore a makeshift podium will be put in place.