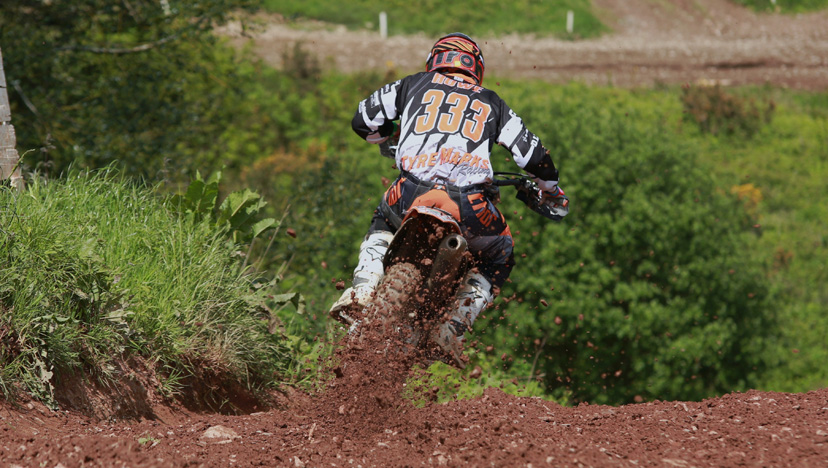 The 2014 S.W.O.R  Championship got underway in fine style yesterday at the Littlehempston track, home to the Teignbridge MX Club.

At first glance the location looked a track of two halves, one side reasonably dry and the other looking a little wet thanks to mother nature.

However once qualifying got underway the hard work of the Teignbridge club began to show through as none of the riders seemed undeterred by the conditions mainly due to the good track preparation.

2013 Expert champion Mike Rowe was to silence a few critics today and proved beyond a doubt what a worthy champion he is.

Qualifying was to see Rowe looking calm and collected as he set about today’s task, leading the pack of fellow riders all the way, a format that was to be repeated in all of Rowe’s races.

With a perfect start in Race 1, Rowe took the Hole-shot and proceeded to lead the pack away in front of the on looking crowd. It wasn’t long before Rowe had a commanding lead over other riders Callum Coffin, Aaron Austin and Paul Deeble. The longer the race went on the bigger the gap became between Rowe and his closest rivals, before taking the first win with a comfortable margin.

Races Two and Three followed much the same format with Rowe creating a considerable lead in each race and once again taking both Hole-shots in each and proving himself the man the to beat. A worthy champion ? – most definitely.

Another rider in blistering form was Alfie Crocker.

Riding in the Inter 14-16 group, Crocker was quite simply UN-catch-able, with all three victories  and a winning margin of over a minute in every race.

Cameron Cottrell was the best of the rest with three Second places, but was no match for Crocker’s mind blowing performance.

Jordan Veale and Brent Harris were to have a good battle today racing in the Inter 9-13 group.

Veale was to take the victory in Race One with Harris coming in a very close second. Harris was to have his revenge in Race Two, seeing him take the chequered flag some 15 seconds clear of Veale.

With all to play for in Race Three it was Veale who was to have the final say, by taking the win over Harris, who finished second some 15 seconds later.

Ian Barnett riding in the Junior Group One along with Justin Carpenter in the over 40’s both enjoyed a trio of wins in their respective groups, and in Junior Group Two it was Matt Bersey taking home the first overall trophy with a fifth place in race one and wins in races two and three.

Last but no means least the Senior results were some what of a mixed bag.

Dan Mundell was to take the victory in Race One and was to have a commanding lead in Race Two. However Mundell left the track on the last lap flag much to the surprise of the on looking crowd. Realising his mistake Mundell re-joined the race, but by this time a fair number of riders were already half way round the track, and it was Kieran York who was to take a very welcomed victory.

Devastated by his mistake in Race Two, Mundell decided not to participate in Race Three. Matthew Wells was to be the victor this time with York coming in second and Ed Lewis sealing third place to close out the days racing.

What is already shaping up to be an exciting beginning to the Championship season, the racing continues next weekend, this time the Morleigh race track being the venue for Round 2.