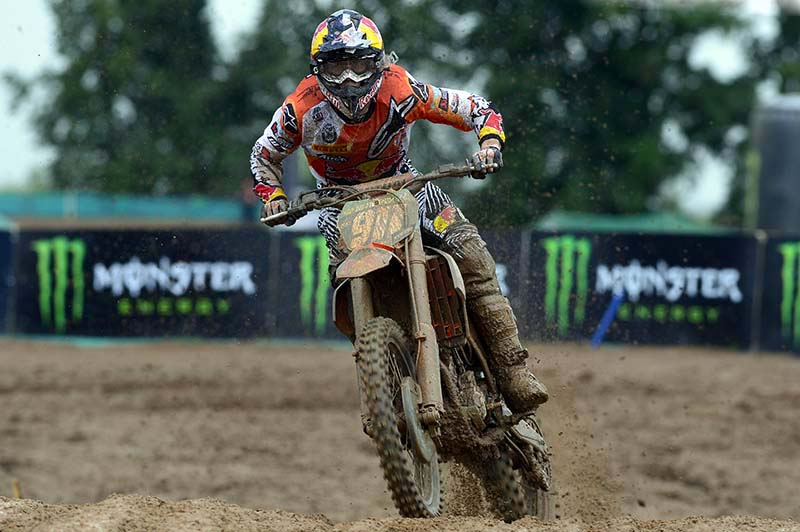 SEMIGORJE (Russia), 21 July 2012 – Day one of the MXGP of Russia took place today at the Semigorje Technical Centre and the rain was once again the protagonist. Both MX1 and MX2 riders had to face a tough and demanding track during the qualifying races and Antonio Cairoli and Jordi Tixier were the best ones of their respective classes and went out with the victory.

The first race of the UEM EMX250 championship took also place today and Mel Pocock obtained a dramatic victory, overtaking Stefan Olsen in the last corners of the race. The Danish rider started dominating the heat, but he crashed in the last lap with Pocock. The Brit was faster in starting the bike again and crossed the finish line first in a dramatic ending. Third was Mike Kras who rode a consistent moto from beginning to end.

MX1
Red Bull KTM Factory Racing’s Antonio Cairoli took the holeshot of the MX1 qualifying race and he succeeded in keeping the lead until the finish line. The Italian admitted that the rain made the track more difficult than expected, but he predicts good racing for tomorrow’s main races.

The second position was for Monster Energy Yamaha’s Shaun Simpson who had a really good start and rode comfortably second during the complete heat. The British rider has improved significantly since he started racing with Philippaert’s bike, so he could even fight for a podium finish tomorrow if he repeats his today’s performance.

Red Bull KTM Factory Racing’s Ken De Dycker starred again in an excellent race, starting around the tenth position and finishing third. The Belgian rider had been the fastest of the pre qualifying session, so the track obviously suited De Dycker’s riding, so even having a bad start, he managed to move quickly to the third position and by the end of the race he was even able to close the gap with Simpson. The KTM rider is very confident for tomorrow and he will do his best to be on the podium.

Honda World Motocross’ Evgeny Bobryshev battled for the third position most of the race with his teammate Gonçalves, but the Russian admitted that he struggled a little bit with the track by the end of the heat and had to settle down with the fourth position. However, Bobryshev was satisfied with his performance and tomorrow he will do his best to finish on the podium in front of his home crowd.

Rui Gonçalves was finally fifth of the qualifying race, but his rhythm and speed showed that tomorrow he might be able to ride for the podium again. The Honda World Motocross rider had a really good start and rode third during the first three laps, he was then overtaken by Bobryshev and later on by De Dycker.

Tanel Leok rode a consistent qualifying race and he crossed the finish line sixth followed by his teammate Clement Desalle. The Belgian rider started ninth and he had to take off his goggles, so he made a superb effort to keep on racing until the chequered flag and he was even able to improve two positions.

MX2
Red Bull KTM Factory Racing’s Jordi Tixier obtained his first qualifying race victory today at Semigorje. The French rider took the holeshot, but his teammate Jeffrey Herlings overtook him in the third lap. However, Herlings made a mistake and Tixier took advantage of it and he took the lead until the chequered flag. The French rider was very excited about his performance today and he hopes to do well also tomorrow.

Jeffrey Herlings was able to finish second of the qualifying race even crashing several times during the moto. The Red Bull KTM Factory Racing rider struggled a little bit today, but he is confident about the main races tomorrow. If it does not rain, the hard sand track of Semigorje can really fit Herlings’ riding, so he could perfectly go for the overall victory.

Nestaan JM Racing KTM’s Glen Coldenhoff did an excellent qualifying race, moving from his initial eighth position to third. The Belgian rider found himself really comfortable on the Russian track and he stayed in two wheels without making any mistake and tomorrow he will have a really good gate pick to try to start at the front and finish among the top five MX2 riders.

Estonian Priit Rätsep had one of his best performances today by finishing fourth of the qualifying heat. The Diga Racing KTM rider started seventh and he succeeded in moving up to fourth, so he will have a good opportunity tomorrow to fight for the top positions. On the other hand, his teammate Jose Butrón had to pull out from the race due to some technical problems on his KTM.

Team Floride Monster Energy Kawasaki Pro Circuit’s Joel Roelants completed the top five of today’s qualifying heat. The Belgian rider did not have a good start and had to give all his best to move from eleventh to fifth, so he might be able to fight for a podium finish once again this weekend.

Valentin Guillod had a really good start and he crossed the finish line sixth, followed by Jake Nicholls and home rider Alexander Tonkov.

Zach Osborne had a really good start and he was riding sixth when he crashed and dropped down to twelfth. In the end he was ninth and Simone Zecchina completed the top ten.

It was not an easy qualifying race for Jeremy Van Horebeek, but even having to enter the pitlane to receive some assistance from his team, he was able to cross the finish line thirteenth.

Valentin Teillet is back this weekend after having missed three Grand Prix due to an injury on his left collarbone. The French rider struggled a lot today because he had to race without goggles, but in the end he managed to finish fourteenth. His teammate Dylan Ferrandis was involved in a crash at the start and he had to work really hard to go from the very last position to the final fifteenth place.

Tommy Searle got another DNF today; the British rider was fighting for the lead when he hit Tonus’ bike when the Swiss rider was recovering from a crash. The radiator of his Kawasaki was damaged, so Searle had to enter the pitlane and pull out from the race.

Arnaud Tonus could not restart his Yamaha after the crash, so the qualifying race was also over for him.