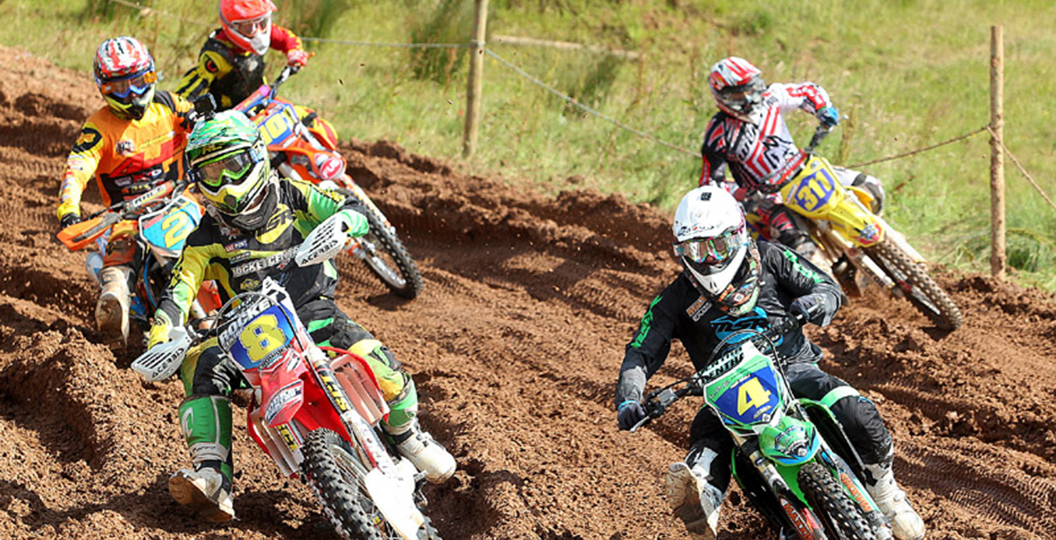 Thrilling,unpredictable racing all played out on a stage in front of good-sized crowds,that’s the story so far of the super 2014 AMCA British Motocross Championships powered by Datatag.And,with two back to back rounds now coming up within the space of just seven days,the riders likely to feature in the end of season shake-up for honours could well become a whole lot clearer!!.First up this weekend,Sunday July 27th, its round 4 at Downwood Farm,Shobdon,Herefordshire as the Shobdon MXC provide the stage for the very talented and rapid championship chasing pilots to display their skills as they go in search of more vital potential title winning points!!.

After the three completed episodes,Clinton Barrs and Luke Mellows are setting the pace at the top of MX1,with Bristolian Barrs currently a slender 8 points clear of his rival.So far,Barrs has bagged overall victories at both Nympsfield and Boraston whilst the very consistent Mellows has not only topped the Bevercotes podium but also finished on the box during the other two rounds.At present,Brad O’Leary holds 3rd and certainly had to dig deep and display immense bravery and determination to earn 99 vital points during the latest clash after suffering from damaged knee ligaments just seven days earlier!!!.After indifferent meetings at both Nympsfield and Bevercotes,young Jack Cox bounced back in style during round three to bag 2nd overall and is occupying the number four position in the MX1 table.

Also reeling off their best points haul of the season so far at Boraston were Elliot Barrs and Edward Briscoe,the two riders currently holding 5th and 7th respectively in the Championship table.Completing the current MX1 top ten are Ashley Thomas,Arran Poolman,Shaun Pearce and Sean Frayne.Whilst Poolman may be forced to miss Shobdon as his partner is due to give birth to their first child,one rider looking to break back into that top ten is Richard Cannings.In a freak accident,Cannings missed round three at Boraston after injuring his arm when loading his bike into his van before travelling South for the event!!.

Consistency is certainly the keyword in the MX2 title chase as Ben Saunders,a former double ACU Under-21 Champion has produced smooth,classy performances to finish on the podium in all three completed rounds.Starting with 3rd at Nympsfield,Ben took top slot at Bevercotes then 2nd at Boraston,results which leaves him 45 points clear of closest challenger Paul Neale.Although the experienced Saunders has been superb so far,he will also be very aware that in Neale he has a real fast young tiger on his tail!!.Going into the previous round at Boraston it was though Carl Benjamin who had led the title charge.However just one week before the event,Carl suffered a broken bone in his hand but still bravely competed during round three and claim 90 championship points although he was to be leapfrogged by Saunders and Neale in the table.Despite that injury,Carl though is still very much right in the mix for glory along with Scott Mathia,another rider who bravely rode through the pain barrier during round three.

Currently holding 5th spot in the MX2 standings and just 4 points behind Mathia is Ryan Crowder,the fast starting Lancastrian being buoyed by a fantastic 3rd overall at Boraston.With Lewis King in 6th spot,the man on a mission in this class is the fast Ryan Morris.In a very rich vein of form after being hampered by mechanical gremlins during both of the opening two rounds,Ryan then blasted to maximum points at Boraston and earned a great 2nd overall in the Norl;ey IMBA MX2 European Championship event.Another rider currently impressing is Jack Gardner whilst Cory McShane and Christopher Hill currently round off the MX2 top ten.

Round four of the AMCA British Motocross Championship powered by Datatag at Downwood Farm should be underway by 11am with the circuit signposted from the B4362 at Shobdon,Herefordshire,postcode of HR6 9NJ.Sunday’s event also includes racing for Juniors,Seniors and Experts competitors.