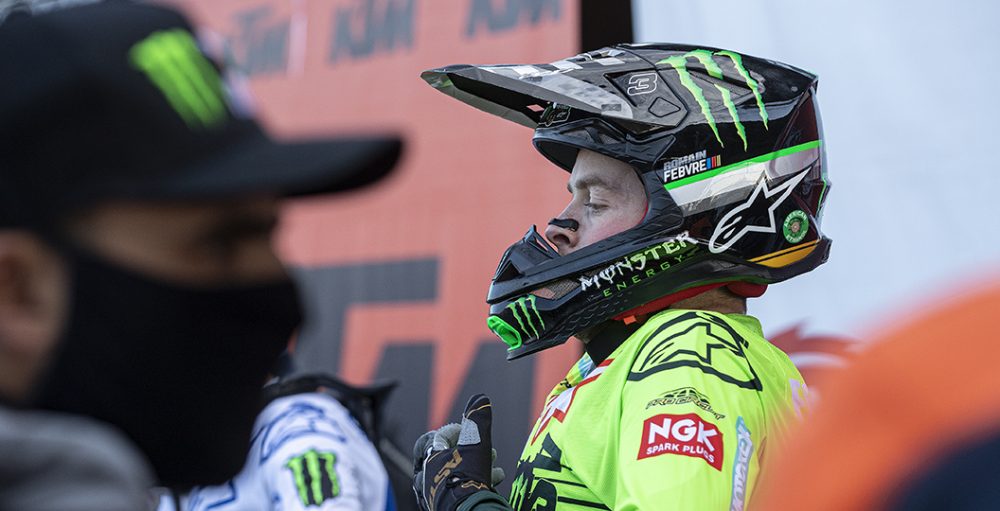 Romain Febvre injured. MX Vice has learnt that Romain Febvre suffered a fractured tibia and fibula at the 2021 Paris Supercross, not a broken femur as reported elsewhere. Febvre crashed out of the second main in Paris on Saturday, November 27, and had a horrific impact – he flew off of his KX450-SR over the finish jump whilst running in second place. Although the off-season is just beginning now, this is not brilliant timing with the 2022 FIM Motocross World Championship less than three months away.

“Professors Bernard Hollier-Larousse and Victoire Bouveau treated a double fracture of the tibia and fibula of the right leg. Following successful surgery, the Monster Energy Kawasaki Racing Team can communicate the actual situation as rumours have continued to appear on social media since yesterday.”

85 days remain before the Grand Prix of Great Britain, which will be the opening round of that campaign. Febvre is going to be on the same motorcycle, that KX450-SR, but will be with a new team, as MX ESCA will not run the Kawasaki factory effort from this day on. Kimi Räikkönen’s IceOne team is heavily rumoured to run the Kawasaki MXGP squad – nothing has been announced yet – and that means Febvre must grow accustomed to a new group of people, as well as some new technical partners. Significant time will be lost with the broken tibia.

It is a cruel way for Febvre to end the current season, as consistency was his greatest strength in the 2021 FIM Motocross World Championship. Febvre was one of just three riders to finish all thirty-six motos and was the only guy who finished in the top twelve in every single one of those. Most impressive is the fact that he finished inside of the top ten in thirty-five of the thirty-six races. Febvre just missed on the MXGP title, of course, as he finished second in the championship, just five points behind the eventual champion.

Kawasaki is expected to announce their plans for the 2022 FIM Motocross World Championship in the coming days, as well as who Romain Febvre’s teammate will be. No rider has been signed at the time of writing. Febvre, on the other hand, signed his Kawasaki contract in August.