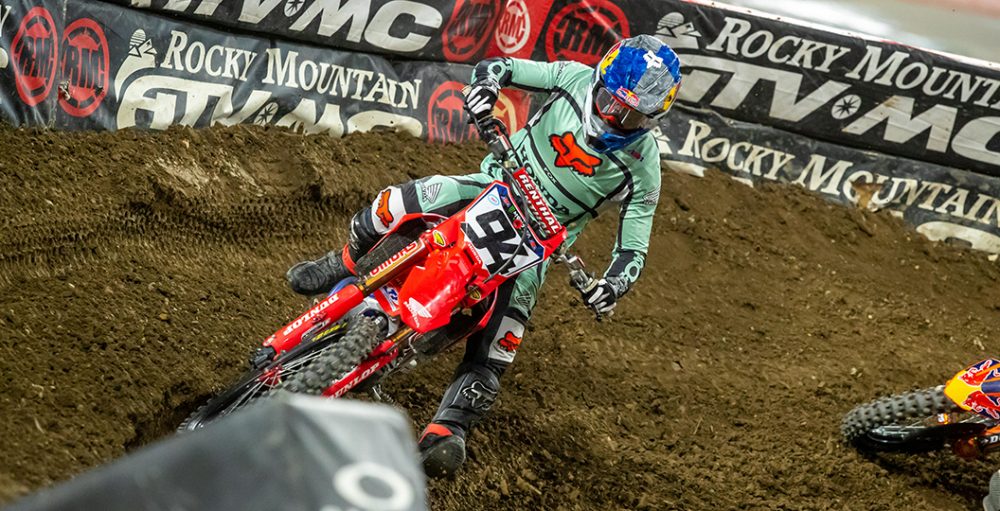 Ken Roczen struggles in Minneapolis, believes progress has been made.

Ken Roczen’s turbulent time of it in 2022 Monster Energy Supercross continued in Minneapolis. Roczen finished eighth, after starting fifth and dealing with a small crash in the middle of the main. The eighth place was just his fourth top-ten finish across the seven rounds that have been run thus far. Yikes. Despite the mediocre result that he secured, Roczen felt that there were positives to take from his trip to Minnesota and is excited to build on that this week.

“The first east coast round was a tough night – the track was really difficult. The dirt was really tacky, especially in practice, where the track was super rutty and just really rough. I wouldn’t say I was the most comfortable but this was the first time that I didn’t make any changes to the bike; I just tried to get used to it. This was the best I have been in the whoops, so that was a big plus for us too. I had a decent start in the main event but got passed by Marvin [Musquin] early on. I was behind him for quite some time, but we kept a fairly close distance to the leader.

“That was good until I tried to pass and jumped a little bit too far to the left after the triple. There was some loose dirt there, and as soon as I landed I washed the front pretty bad and went down. My bars were tweaked quite a bit and we only had a few minutes to go, so there was not much that we could do from there. It might not be the result that we wanted but there are some positives to take away compared to the previous weekend, so we are going to build on that. It’s my first week back in Florida now, which I’m really excited for and I think it will be a big help in the upcoming events.”

Roczen openly stated that he returned to his bike set-up from last year in the week prior to the fifth round of 2022 Monster Energy Supercross, Glendale, but it remains to be seen whether he has stuck with that in the weeks that have followed. The victory that he claimed at round one inside of Angel Stadium seems like a distant memory at this point. Lars Lindstrom, the team manager at Honda HRC, confirmed that he too feels that Roczen has made some progress in the last seven days, which further confirms that there could be a light at the end of the tunnel.

“Kenny was riding great as well, and was in the mix for a podium until he landed in the marbles off the triple and crashed. I think we made good improvements with his bike this week and I know we can get him back on top soon.”