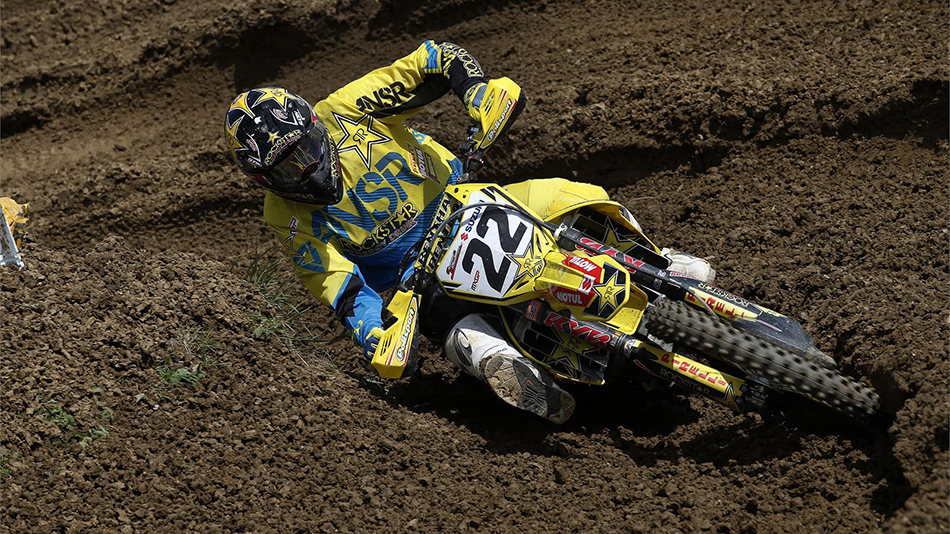 Rockstar Energy Suzuki’s MXGP Factory rider Clement Desalle kept pace with the leaders of the premier MXGP class as the Belgian grabbed fourth overall at Sevlievo for the Grand Prix of Bulgaria today; the fifth round of 18 in the FIM Motocross World Championship.

The Belgian took his works RM-Z450 to fifth and third positions in the two motos watched by 20,000 spectators and classified just ahead of team-mate Kevin Strijbos in fifth.

It was a day of two halves: The rutted-and-rough Bulgarian mud that had been chiselled through the presence of five racing categories through the weekend – and had been hit by rain during the week – was a different prospect to the flat hard-pack normally found at Sevlievo. The deep ruts were hard and demanding for the first motos but a deluge of rain arrived after lunch to make the second races a mud-fest.

Desalle, who won at Sevlievo in 2010, struggled to get a good feeling in the varying race conditions. The MXGP of Trentino-winner was a distant fifth in the first sprint. He was higher placed, third, in the second and was briefly applying pressure to the back of Jeremy Van Horebeek in the closing stages but could not rise up another position.

Strijbos showed some excellent speed to recover from a first-lap crash to secure sixth position in the qualification heat on Saturday. It set a common theme for the Belgian over the weekend; good pace blunted by less-than-ideal starts. Strijbos was able to profit from Van Horebeek’s mistake in the closing stages of the first moto to break into the top-three for the second time this season. He was again ‘on the chase’ in the second race and rode consistently in the wet. Strijbos tried to reach Paulin in fourth but a rapid pit-stop for more goggles did not help his cause.

Suzuki continues to push at the forefront of the Championship standings. Desalle is joint-second with 194 points, in arrears of Tony Cairoli with 222 while Strijbos is sixth. Round six of the series – on May 4th – is almost a home Grand Prix with Valkenswaard, near the south Dutch border, hosting the Netherlands stop on the calendar and a venue that is a short hop from the team’s Lommel base in Belgium.

Clement Desalle: “I don’t think the track conditions were acceptable. There were so many categories here this weekend. When you see the track it is one thing; when you ride it is another. I’m pretty sad about it. I managed to finish fourth but did not have a good feeling. When I’m not confident then it is easy to see it with my riding and the result also. The rain helped to slow the speed down. I had a good start and was second and riding quite within myself but I had crash and lost time. We need to make an analysis of how we performed in these conditions but a positive was the starts this weekend; again I was in the top-three.”

Kevin Strijbos: “I’m not happy with the top five. I was riding well this weekend. I was pressuring Van Horebeek all race and finally he crashed so I could take third and I was pleased with this. It started to rain before the second race and that was OK for me because I’m good in the mud. The track was tricky for passing and like many people I had problems with my goggles. With three laps to go I quickly came in to change and I almost managed to pass Paulin at the end. Overall I should have been on the podium with the speed I have. Things did not work out and for that I’m disappointed. I think the track was just part of racing. We always ask for ruts and lines and we had plenty today! I don’t think people can complain too much because it was not dangerous. You just had to pick the good line.”