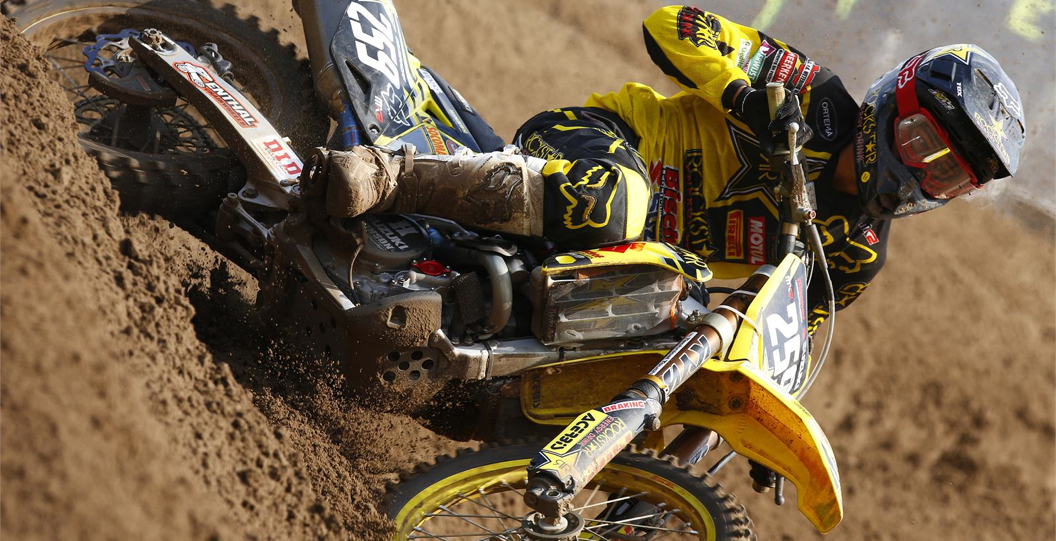 After a rare lengthy break in the FIM Motocross World Championship calendar, the 2014 campaign will wind-down quickly with the remaining two rounds of 17 to be played-out in the next 10 days.

Kevin Strijbos will be the sole representative on the RM-Z450 for the MXGP factory team after Clement Desalle underwent surgery to fix a broken scaphoid two weeks ago. The Belgian has a mathematical chance of finishing as runner-up in the premier class but is nevertheless assured of a top-three finish in MXGP this year thanks to his 133 point advantage over Shaun Simpson. Desalle sits fourth and is also confirmed with this ranking courtesy of his numerical margin.

Little is known about the brand-new Trindade circuit that will be the fifth Brazilian site to entertain the FIM series since 2009. The layout is largely flat, with many jumps and, as what seems characteristic for Brazil-based Grands Prix, consists of dark red distinctive dirt.

Before the Belgian squad embarked on the long haul to Brazil, we took some time to catch-up with Strijbos’ mechanic Bo Rasmussen; the Dane has also ‘spannered’ for Steve Ramon and Tanel Leok in ‘yellow’ over the past seven years.

You joined the team in 2007. The standard of quality in the bike and the way the team works don’t seem to have shifted that much in this time frame. Where is the ‘juice’ in the job for you?

“Sylvain [Geboers, Team Owner]. Just the way he is and his approach. He trusts us implicitly and is as straight as a die. He also pitches-in and helps and has such an open idea about management. Aside from his influence I do like working on the bike. I take pride in it and I try to be one step ahead if possible. I do what I have to do and don’t get too involved in other areas such as the suspension set-up. I don’t like to put things into doubt. I still give my opinion and I’m honest about things. I can have good or bad days but generally I’m a quiet guy and I don’t need to stand in the centre of the awning. I try to do everything that the rider likes and I don’t like to go against. For example he [Strijbos] doesn’t like to have a new throttle cable each time and makes each one last two GPs. He says it makes the throttle feel too light compared to the practice bike.”

“Kevin is a rider that likes to work with the bike and that’s fine for me. He’s not unhappy, but if you change something by two clicks then he’ll notice. Steve [Ramon] was the same but he was quieter. Kevin isn’t too bothered about very minor details on the bike and I think he is too hard on himself sometimes. He gets low when he perhaps doesn’t need to be but otherwise he is great to work with and is a considerate person.”

Steve, Tanel, Kevin and even Xavier Boog. Can you talk about the differences between those riders?

“Well, with Steve it was more like a friendship. Kevin is easy, while things with Tanel were quite difficult. He is not so technical and very hard on the bike and everything has to be very rigid for him…although when he was here the bike finished every race the whole year. Kevin is organised and Steve was also.”

Steve was Suzuki’s last World Champion [in 2007]. How was it transitioning between the Belgians?

“Steve and Kevin are both a little bit similar on the bike actually. They are both very talented and I would say that Kevin is perhaps a step higher but, like I say, he can be too critical of himself. Steve had some luck, especially in 2007, but you make your own luck by keep on keeping on. From what I understand Kevin didn’t have the best guidance when he was younger but Steve had a solid family behind him all the time. Kevin has a good base now and he is always consistent. He fluctuates in that consistency and the start of this year had a few bumps as he came back to fitness but he deserves that third place in the championship.”

The team has such as established staff roster. People have been here a long time and there are not many young faces…

“They will come because people cannot keep going forever! But Sylvain is a big draw, at least for me. It was 80% of the reason why I wanted to come here and continue to work here.”

Trindade sees Rockstar Energy Suzuki Europe duo Glenn Coldenhoff and Jeremy Seewer in action on the works RM-Z250s and with the objective of ending 2014 on a bright note.

Coldenhoff has just two more appearances in the MX2 category before switching to MXGP with the RM-Z450 for the team in 2015. The Dutchman will be thinking of his record at the start of the season where he accumulated three podium finishes in the first four meetings and hoping for similar glory.

‘The Hoff’ was present at Jauer and Gaildorf in the last two outings of the ADAC MX Masters German Championship as he ploughed ahead with his recovery in terms of his performance and potential on the bike in the wake of a knee reconstruction that caused him to miss nine Grands Prix. “It has been a long break but I’ve kept busy with two appearances in the German Championship and also a Belgian International,” he said on the eve of packing for Trindade. “In the last week we spent some days in France training on the hard-pack ready for these final two GPs. I feel like the fitness and form on the bike is coming back so I’m hopeful for Brazil and Mexico.”

Due to his age of 23, Coldenhoff has run-out of time to make any further impact in MX2; a class in which he celebrated his first Grand Prix victory last year in Great Britain. Will the upcoming races represent an emotional farewell to the quarter-litre? “Well we have these two races and then I’m due to ride the 250 at the Motocross of Nations so it is not a ‘goodbye’ yet,” he says. “Of course I want to finish the season in the same way I started. I don’t have to think about a championship or the importance of positions in the final standings – unfortunately – so the goal is just to do each race the best I can and score the best position possible.”

Seewer will soon see the culmination of the longest racing term in the 20 year-old’s life. The Swiss’ maiden season in Grand Prix and in a year where he finished his studies and turned Pro has been immensely encouraging and the friendly athlete will be entrusted with Suzuki’s factory effort for 2015. Seewer has scored points in every moto so far in 2014 (30 in total) and also shone against the 450s on German territory with a second place overall at Jauer.

“It was quite a relaxed month and I spent a couple of weeks in Belgium and doing some sand riding,” he updates. “It felt like it was the first time this year where I could break from the routine of races and concentrate on some good practice and preparation. I’m looking forward to the trip but it is the start of a really busy time because as soon as I get back, then I have another German ADAC MX Masters race and then go straight to the ‘Nations for Switzerland.”

The strongest contender for the ‘Rookie of the Year’ award, Seewer also has some hard work left for Brazil and Mexico. The ‘#91’ is 10th in the championship and can work on a 36-point gap to Jose Butron to think about ninth. At the same time he has to be aware of Belgian GP winner Max Anstie gaining ground behind; the Brit is 40 points in arrears. “I think Butron is quite far away,” says Seewer. “We have been racing quite close but it will still be hard to catch up those points. I have to look at Anstie. He had a really good GP at Lommel of course but I’m hoping he won’t be so strong in these two races to come. My goal is to keep that 10th place in the championship.”

The provisional weather forecast for Trindade’s inauguration for MXGP this weekend points to sunshine and warm temperatures.