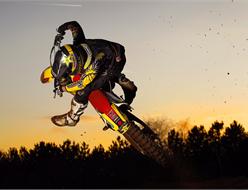 Kullas (19), Petrov (17) and Zaragoza (15) spent two days in and around the Geboers Racing Promotion factory team HQ in Lommel both in the studio and on the track to produce some stunning imagery before getting down to the sharp end of business at the first GP at Valkenswaard on the 9th April. We’re certainly looking forward to see how they do and it looks like they’ve found another gem in young Jorge Zaragoza – that youngen can certainly turn on the style!