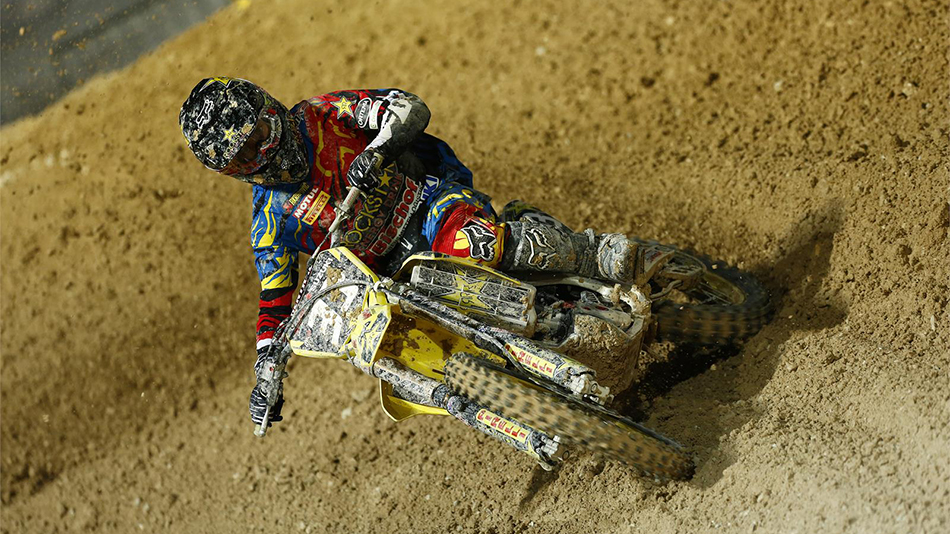 The opening flyaway stint of the FIM Motocross World Championship does not let-up for the factory Rockstar Energy Suzuki World MXGP and Europe teams in the MXGP and MX2 categories respectively as both crews are currently adapting to the heat and humidity close to Si Racha – a short hop from Bangkok – for this weekend’s Grand Prix of Thailand.

One week after the season curtain-raiser at Losail in Qatar Clement Desalle and Kevin Strijbos (works RM-Z450s) and Glenn Coldenhoff, Julien Lieber and Jeremy Seewer (factory-backed RM-Z250s) go in search of their first silverware and bumper points-scores of the series. For the second year in succession – and for the second time ever – Thailand hosts the second of back-to-back races in Asia. The undulating, spectacular and earthy track close to the costal city of Pattaya is again the venue for this steamy event that made a decent impression in its FIM Motocross World Championship debut exactly one year ago.

Both Strijbos (pole position holder) and Desalle (charging comebacks from mediocre starts) began their 2014 campaign at Losail with promising signs for this weekend. Desalle will have positive memories of Si Racha after his podium finish there in 2013. “I’m working to be better and I think we will see some improvements soon,” the Belgian said after his run to seventh in Qatar in just his second race since returning from a long-term shoulder injury over the winter. “Honestly I prefer to start like this and be on top of the final championship podium at the end of the year! The season is long; we cannot forget this.”

Regarding Si Racha, the 2013 Motocross of Nations winner knows what to expect: “Thailand will be really warm. We discovered a lot of things about this country last year and we know a little bit about what we have to do to adapt to the conditions there. I think we were lucky with the short rainstorm we had. It made the ground nice and soft. It was not a bad track at all. The heat just means that the last 10 minutes of the motos are tough. I have done some extra sauna sessions to prepare!”

Strijbos made a fantastic first impression last Friday evening with an untouchable performance to pole position. The Belgian knows he has the power on the RM-Z to be right at the front of the pack around the first corner and seized the holeshot in the GP motos last Saturday. The veteran needs to pace-out his race and avoid the arm-pump to be in with an immediate shout of the top three. “We’ll change a few things on the set-up but I think we showed in Qatar that we have the potential,” he commented.

Rockstar Energy Suzuki Europe asserted its presence in the desert thanks to Glen Coldenhoff’s eye-catching debut speed on the RM-Z250 and with both Julien Lieber and Jeremy Seewer causing trouble among the top-10 positions. The latter duo will be using Si Racha to scrub some mistakes out of their focus for the motos while Coldenhoff knows that only the loss of his rear brake counted him out of the running for the overall podium at Losail. “I really like Thailand…and Qatar actually,” said the Dutchman, who classified seventh at round one but picked up the team’s first top three moto finish since the 2013 Dutch GP in the opening sprint. “They are a couple of nice tracks. I am in really good shape but I’m still not a fan of the hot weather. I have some good ventilated shirts and pants from Fox so it will be better than last year for sure! The bike is working really well and handling so well. I am feeling confident on it. We just need to work a bit more on the starts now.”

For Lieber the prospect of the Thai humidity is outweighed by the challenge of the racecourse itself. “Last year it was pretty difficult but the track is really good so I’m looking forward to it,” the Belgian said. “I feel the races are shorter but the difference on the track is not that big. It’s quite nice,” he added on the sensation of the shorter 30 minute and two-lap motos run for the first time this season. Seewer is also mentally prepared for the temperatures ahead: “Normally I don’t have much of a problem with that but we will see how different it is. It will be special and it is something we all have to cope with.”

The Suzuki crews will return from Thailand on Monday as thoughts will turn to round three in Brazil three weeks later at the end of March.