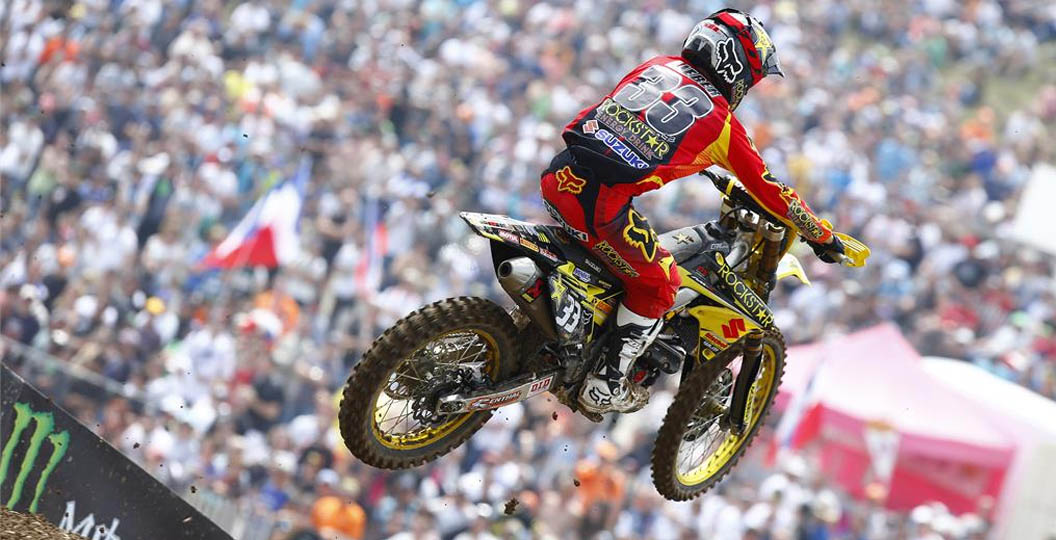 Sunshine is currently coating staff and workers at the popular circuit of Maggiora north of Milan this week as the spectacular hilly hard-pack layout prepares to host the Grand Prix of Italy and the 10th round of 17 in the 2014 FIM Motocross World Championship.

For Clement Desalle Maggiora presents a case of ‘unfinished business’. The winner of Trentino, Spanish and French Grands Prix is eager to add the Italian accolade to his 2014 mantle after claiming the opening moto 12 months ago but had his chances of overall victory halted by a rare electrical problem in the second.

in the MXGP title chase the 25 year old rests just 20 points away from series leader Antonio Cairoli (25 points are awarded for a moto triumph and sixteen such races remain this year) who will bear the pressure of his home event this weekend. Desalle is hoping to topple the champion for the third time in the past four rounds.

“It doesn’t matter so much about it being in Italy – it is good to win anywhere! – but it is true that the championship is going well at the moment and I feel positive about my form and speed and the job we are doing,” said Desalle today from his home in Belgium. “I have to keep looking at the big picture little by little because anything can happen in this sport. It has to be moto-by-moto and race-by-race because you don’t know how you will feel at each event. The message is always the same: to do the best possible.”

Like team-mate Kevin Strijbos, Desalle has been able to make the most of the free weekend several days ago to recuperate and get ready for two busy and intense meetings in Italy and then at Teutschenthal, Germany in the space of seven days. “I took a few days just to relax and recover after France but it has been the normal programme since then,” he said. “I’ve done some mountain biking and enduro with friends and will get out on the bike today. No testing; I’m really happy with the bike at the moment and I think that has been clear to see.”

Of the impending Grand Prix this weekend Desalle knows he will be riding on favoured territory even if the vast majority of the mammoth crowd expected at the venue that will stage the 2016 Motocross of Nations will be vocal in support of his title rival. “Maggiora was going well last year,” he reflected. “I liked the track and won the first moto and then we had some bad luck in the second. Anyway I understand some changes have been made for this weekend so I hope we find some positive things.”

Kevin Strijbos has been unable to match his competitive speed with more podium trophies in the past two fixtures but is hunting his fourth rostrum appearance of the year this weekend and knows that some improvement with his starts will be key.

The hot Italian weather and bright skies will assist the set-up schedule this week for Maggiora but a slightly darker forecast currently lies in place for the weekend with showers predicted on both Saturday and Sunday.

While many of their peers in the MX2 division of the FIM Motocross World Championship were able to enjoy a respite from racing duties last week Rockstar Energy Suzuki Europe were still in the heat of battle as Jeremy Seewer picked up a best finish of fifth position at round two of the German ADAC MX Masters Championship last weekend at Ried in Austria. The young Swiss then headed directly to his native country for the Swiss national series at Muri on Monday where he grabbed a pair of second positions behind MXGP star Davide Guarneri and then dashed back for final examinations in his mechanical engineering studies!

“I have not stopped!” the impressive MX2 Grand Prix rookie said. “Ried was pretty difficult actually against those 450s. The track was very hard and dusty and it felt like Enduro! I found it tough to pass so was pretty happy with a fifth place but then I got caught up in a crash in the second moto and fell off again once I got into the top 10, ending 15th. I then drove five hours for my first and last race in Switzerland this year, an event quite close to my house. It was great to be there for the fans and the sponsors but I couldn’t do much about Guarneri on the 450 and finished second twice. I then moved straight onto the books!

“I’ve had one exam and now I’m waiting for the last,” Seewer added while speaking in between the school tests on Wednesday. “There should be a practical section of the course from the workshop until the end of August but I think we will finish the programme this week.”

Seewer will then turn fully professional for the rest of his maiden season at the highest level. He is currently 11th in the standings for his maiden foray into MX2 but has several wild-card appearances under his belt while substituting for the team’s principal riders in the case of injury over the past two years. One of those outings came at Maggiora in 2013 where he was unlucky to come away with only two points. “I actually rode in the Grand Prix last year and really liked the track; all those hills and the hard-pack…I’m looking forward to going again and the atmosphere was pretty special with all those fans.

“I don’t think there will be too much I can change,” he commented on the alteration to his weekly routine with his studies no longer a factor. “I will have more time on my hands for sure but it would not make sense to try different training in the middle of the season.”

Seewer should hopefully move into the top-10 this weekend. He needs to pick up just nine points to surpass injured team-mate Glenn Coldenhoff who is rehabbing from a knee reconstruction. Julien Lieber’s strange up-and-down season stretched on at Ried. The Belgian crashed in the first moto and aggravated an old shoulder injury but went out for the second race and scored a very decent second place behind brand-mate Marcus Schiffer on the RM-Z450. Lieber is 14th in the MX2 Grand Prix table.