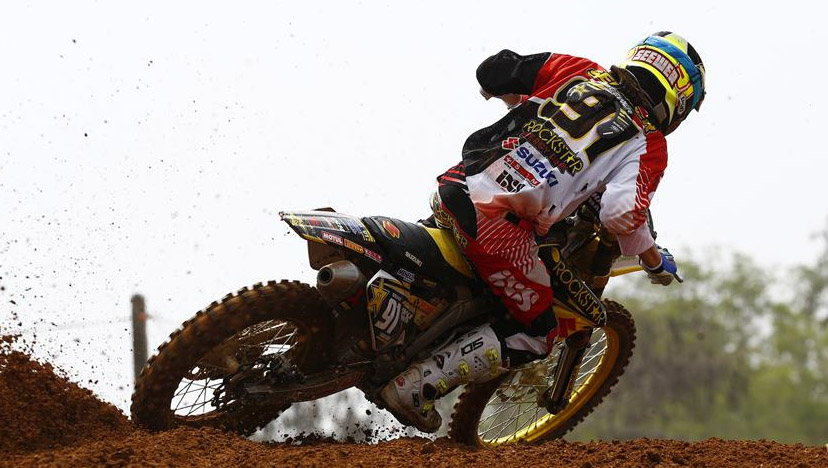 Round three of 18 in the 2014 FIM Motocross World Championship this weekend will see both Rockstar Energy Suzuki Grand Prix teams racking up the air mileage once more as Beto Carrero in Brazil will host the third flyaway meeting of the season.

Rockstar Energy Suzuki World MXGP; Clement Desalle and Kevin Strijbos on the works RM-Z450 and Rockstar Energy Suzuki Europe; Glenn Coldenhoff, Julien Lieber and Jeremy Seewer with the factory RM-Z250s, have decent and realistic chances of victory in what is likely to be a rain-hit event and the last overseas GP before the European stint of the calendar kicks-in.

The first trip to Brazil in 2014 is likely to find another sell-out crowd in the circuit-wide grandstand seating at Beto Carrero, north of Florianopolis, as the paddock eagerly anticipates the raucous and passionate atmosphere that the Brazilian public bring to high-level motorsport gatherings. The red hard-pack soil could provide a heavy technical test over the weekend with rainfall predicted in the build-up to the race and also on Sunday.

Desalle and Strijbos have had a two weekend hiatus to recover from the draining back-to-back GPs scheduled in Qatar and Thailand and used the downtime from international duty to test some more 2014 race components freshly-in from Japan. They also contested the Mantova Starcross International in Italy where Desalle claimed a moto win.

For Strijbos in particular the opening thrusts of the GP calendar have been frustrating. The Belgian was fast enough to take pole position in Qatar but has not enjoyed similar luck in the motos so far to log his first podium of the year. Crucially the 28 year old is creeping towards full fitness and race trim after recovering from his off-season hip injury.

“We did some tests on some new components after Mantova,” reveals Strijbos. “A few 2014 things to try including some new frames. At this level it is hard to make massive gains so it is just about trying-and-seeing and catching improvements where we can. Anyway, we’ll have the modifications ready for the Grand Prix at Arco as the bikes are already headed to Brazil.

“I need more riding time and that was the point of competing at Mantova,” he says. “I was happy with some of the speed at Qatar and Thailand but for sure we needed things to go a bit better for us. After the tests I took the weekend off as we were riding for a couple of days in the week and since then I’ve been in the gym and will fly to Brazil on Wednesday.”

Strijbos fondly remembers Beto Carrero. He gained his first podium finish in five years in the inaugural edition in 2012 and then repeated the rostrum appearance last year (his first trophy on the factory Suzuki since 2007) after leading most of the second moto on the RM-Z450. “I like racing in Brazil,” he underlines. “Obviously the crowd really gets into it and Beto Carrero is a pretty cool set-up. I’m not hearing good things about the weather and they are expecting a lot of rain beforehand, so I hope it will not trash the place. We’ll have to see what kind of race we’ll find.”

Desalle collected the Belgian crew’s first garland of the year in Thailand two weeks ago as he finished runner-up to Tony Cairoli. A repeat of his 2013 Brazilian Grand Prix performance – again second place – is the minimum goal but the MXGP championship candidate will instead have designs on becoming the third different winner in the class this season.

It is exciting times for Rockstar Energy Suzuki Europe in the MX2 class of the FIM Motocross World Championship. Youngsters Julien Lieber and Jeremy Seewer are showing signs of class, speed and progression on the RM-Z250 but it is effective team-leader Glenn Coldenhoff who goes to Brazil this weekend with his eyes on the main prize.

The 23 year old flies across the Atlantic in hot form. At round two in Thailand he gave the team their first Grand Prix podium appearance in more than two years. Just last weekend he maintained his 100% success ratio in the Dutch Championship by owning both motos at Mill. At Beto Carrero – a circuit where he claimed victory in the qualification race last year and then also classified second in the first moto – Coldenhoff will be chasing his second career GP triumph; aided by the fact that defending World Champion (and winner of the first two rounds this season) Jeffrey Herlings will not be in Brazil due to a shoulder injury.

“Mill was good and I was happy about my riding on what was a tough circuit,” he says. “Some of the technicians from the MXGP team were there as well as an engineer from Japan so I was happy to go 1-1 in front of them and show what good work we have been doing.

“It has been a normal week,” he adds. “I rode once and then have an evening flight to Brazil. I really like the Beto Carrero circuit; it worked out quite well for me last year and only a crash at the start of the Superfinal kept me away from the podium. I’m looking forward to it.”

The Dutchman has raised expectations after two luckless MX2 campaigns where injuries have dented Suzuki’s chances of again fronting the field. The RM-Z250 is again a welcome presence in the leading group of the category. “For me this is vindication that the changes we wanted to make around the time of the Finnish Grand Prix last summer were correct,” assesses Team Manager Thomas Ramsbacher. “We’ve had plenty of talks with Sylvain [Geboers, MXGP Team Owner/Co-ordinator] over the last year but when he actually came on board with full intent then it has really worked out for the development of our RM-Z250 and given us that extra competitive edge. I felt the internal changes were necessary for us to get back near the front and thanks to the support of all our partners it’s going to plan so far.

“I couldn’t be happier with Glenn,” the German offers. “He is a real professional and he really lives for the sport. He has some good people around him and pushes himself hard to be the best he can. He is doing a great job so far and has committed fully to this project. It is genuinely exciting for us to see what else he can do this season.”

While Coldenhoff is third in the MX2 championship standings and could tally the 28 points needed to seize the red plate as class leader for the first time in his career this weekend, his team-mates are looking for more numerical bounty after some promising pace in the first two outings in Qatar and Thailand.

“Julien is coming back from that injury last year [ruptured knee ligament] and he needs to stop putting the pressure on himself,” says Ramsbacher. “He was running around the top five in Qatar so we all know he has the potential. He just needs to ease-up a little bit, get focussed and the lap-times will come because he has the technique and the sheer will to do well.

“Jeremy had a few wild-cards appearances last season and now he’s full-time in Grands Prix and deserves his place in the pack,” he continues on the 19 year old Swiss. “He was hassling Charlier [Christophe] at Qatar and he has the pace to be in the top 10, which is impressive for a youngster like him. Keep an eye on his progress because we’re sure he’ll learn a lot as the season goes on.”

For the third year in a row Beto Carrero will be home to the Grand Prix of Brazil but for the first time will be the opening event of a double-visit in a single season; the second trip to South America occurring at Goianna in the first week of September. The flat track located within the grounds of the theme park north of Florianopolis is a compact layout with some hefty jumps. Sadly the weather forecast is decidedly glum with rain predicted in the build-up to the popular fixture and also on race day.