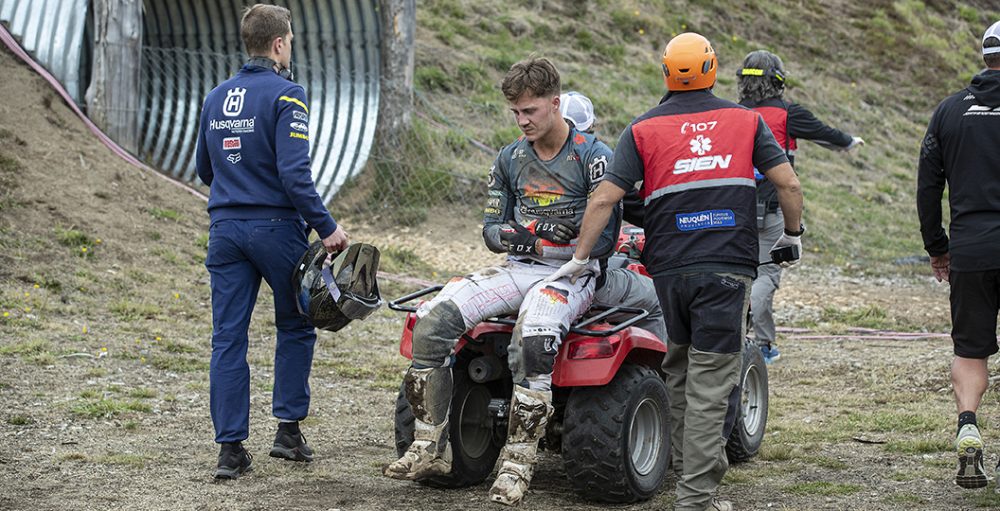 Roan van de Moosdijk sustains injuries in qualifying, out of MXGP of Patagonia-Argentina.

Roan van de Moosdijk put in a heroic effort at the Grand Prix of Lombardia, as he nursed a shoulder injury from the qualifying heat and still secured a fifth in moto one. Moosdijk kept himself in the title hunt and took advantage of a weekend off before the Grand Prix of Patagonia-Argentina, but things took an unfortunate turn in qualifying today. Moosdijk crashed hard whilst battling inside of the top five and will be out for the foreseeable. There is no word on the injuries that he sustained, but he will miss a significant chunk of time.

“P3 for @KayDeWolf in qualifying! We will get @RoanVDMoosdijk39 home to see our specialists, after a hard crash.” – Nestaan Husqvarna Factory Racing

Roan van de Moosdijk’s injury is a massive blow to the Husqvarna Factory Racing organisation, who lost Brian Bogers to a dislocated shoulder today as well. Kay de Wolf will continue to represent the squad in the MX2 class; he is currently third in the championship standings and sixteen points from the current leader. De Wolf qualified in that position today as well, so has a great chance of repeating his podium success from the previous event.