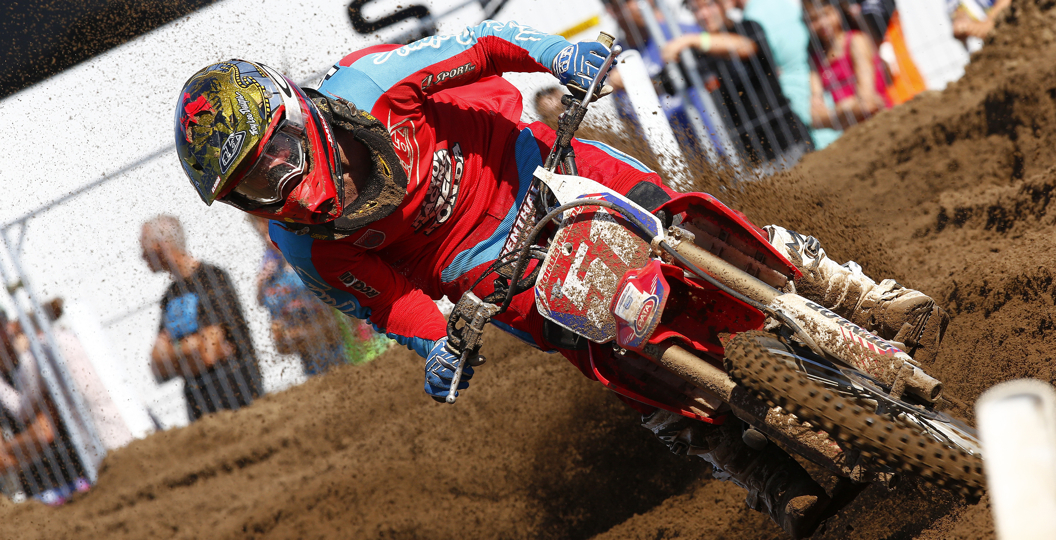 Before I went into the season, I wasn’t training but after Valkenswaard I thought ‘Albie, you need to train and you need to start eating correctly’. I went to Matterley and I won. From then on, I was always in the gym and focused on becoming European Champion.

The 2014 150 Championship had two main title contenders coming out of the first round at Valkenswaard: the Finn Jere Haavisto and Brit Albie Wilkie. After a season of extremely close racing Wilkie went on to win the Championship, by just two points from Haavisto, in a thrilling ride on the sand of Lommel. As overall winner, Wilkie won a fully supported 2015 EMX250 ride with the JTech team aboard a Honda CRF250R. But who is Albie Wilkie?

“I started riding at the age of six. In Dartford there used to be a wasteland where my dad, my uncle and I used to go and just ride our bikes for fun. Then it started to get serious and I competed in my first race. It was a 6-8 year olds Auto 50cc race: I was still 6 and funny enough I won the first race. I left that weekend and I thought ‘Dad, we need to take this further’. From then on I just gradually got better and better.

“Since I started secondary school it’s been a struggle to juggle my school work with the racing, but my school have always sorted it out for me. They are very understanding; they know I’m good on the bike so they give me chances outside of school to train, like one day off a week. Normally on a Wednesday I take my bike to a local track and spend the day training. On 150 weekends though I would take the Friday off. I would have to take into school my paperwork, license and tell them where I was going like Czech Republic, for example.

“My Dad is definitely the main influence in my riding. He’s been there since day one and he’s always been supportive. My Mum is interested but she doesn’t really like the sport. She came and watched me once but that particular weekend I broke my collarbone. She hasn’t come to another one after that because she didn’t like that I got hurt.

“The Honda 150 European Championship meant everything to me. Before I went into the season, I wasn’t training but after Valkenswaard I thought ‘Albie, you need to train and you need to start eating correctly’. I went to Matterley and I won. From then on, I was always in the gym and focused on becoming European Champion.

“I felt the pressure going into the last round at Lommel. Going into it, everyone was saying that it was a tough track and you need to have a nice, calm head there. When the two-lap board went out and I was running in second I was just thinking ‘please, just get over that line’. When I got off the bike and the interviewers and everyone were surrounding me saying well done, I was speechless and it just didn’t sink in that I had won the title. It was more on the way home when I was holding that gold plate that it started to hit me. I was so, so happy, it still took a while to fully sink in though. I was going to my local meetings to watch the racing and everyone was just so supportive and I am so thankful for that.

“I think it was halfway though 2012, I switched from a Honda to a KTM. I rode the KTM for half a season and my results weren’t as good. People were saying to my Dad ‘why have you gone to KTM, it’s not helping? Go back to Honda four-stroke, it’s what you’ve been on since the start’. My Dad then turned to me and said ‘we need to change the bike again’. Since then I’ve done the 150 Championship and it’s led to this. The CRF150R has definitely helped prepare me for the CRF250R. Everything about it rolls into something I can apply to riding the CRF250R.

“The 150 Championship is great. If you’re a young kid looking to become European Champion and get an MX team ride, it’s an entry into the MX scene. You need to enter and the CRF150R is such a good bike. The tracks are tough but the experience is such a massive boost. It brings you on so much, plus you can go out and enjoy yourself; it’s such good fun. Before the 150 Championship I wasn’t so big on nutrition and training but the access to experts made me put my head down, go to the gym, train and eat the right foods. I did have a point where I did go backwards but since I’ve won the championship, all I’ve done is eat the right food and go to the gym every day. I’ve just focused so hard.

“The first ride on the CRF250R was definitely a struggle – it’s a bigger and heavier bike and I’m only 14 at the moment, but it will come. I’m going to the gym every day for three hours just training. I have been focusing on cardio and core to get the strength up, and I’ve also been swimming a lot which helps with the breathing. This will all help with the sand tracks, which are all about fitness. I’ve been going out every weekend just riding my bikes too, getting as much bike time as possible really for when I start the JTech ride.

“There’s a few tracks in EMX250 that I haven’t visited before, but when I go to the track I tend to adjust quite quickly compared to other people. That’s always been a bonus with my riding. Being a motocross rider everyone wants to become a champion in some sort of way – I’m looking to just go out there, give it my all and try my best.

“I spoke to JTech’s Iller Aldini and he said that the bike will be ready on the 12th of September so I will be heading out there around the 8th or 9th. I’ll be able to ride the bike and get some testing in. Hopefully this year will bring some good memories”.