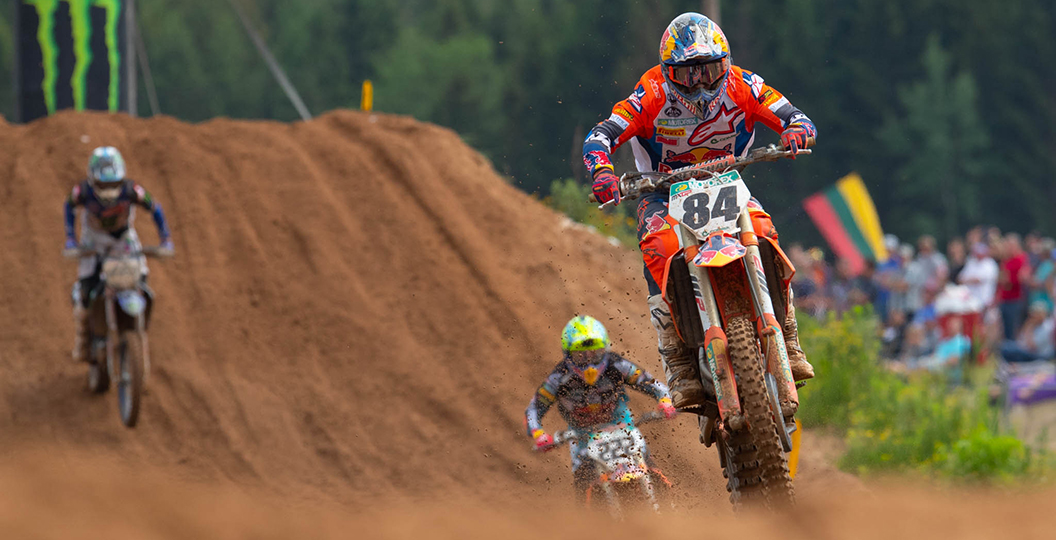 Now, one day on and moments before visiting his doctors, Jeffrey Herlings has shared some more thoughts on everything that happened at the Grand Prix of Latvia. It is an insightful comment and confirms what the team told MX Vice yesterday: Surgery may not be necessary.

“Just want to say thank you to the whole KTM Factory Racing crew. Feeling extremely gutted for them. They have been working extremely hard to get the set-up on point and they really succeeded. Thanks to the whole crew for the great effort. Seeing the doctor in a bit and I hope to give you guys an update ASAP. Still cannot believe this happened. Small tip over and just wrong place wrong time. I can’t just say… BAD LUCK. Hope this one won’t require surgery and won’t take too long. Thanks team for believing in me and we’ll get back on top. It’s just not our year!”

It has now been confirmed that Jeffrey Herlings, the winner of the first heat at the Latvian Grand Prix, has fractured an ankle in that incident. This means that # 84 won the race with a broken ankle! Phenomenal. Herlings has released the following statement…

“Very sorry to say that I broke my ankle, I had a small accident on the sighting lap and another rider stepped over my bad foot and broke my ankle. I decided after the sighting round to line up for the bike and I also won the bike with a broken ankle, I can’t believe it …….. Obviously I’ll be out for the second race, I’m sorry for my team and the sponsors “.

Speaking to someone in his field, Jeffrey Herlings already has a date with his doctor in Belgium tomorrow. The necessary steps will then be identified

Jeffrey Herlings has just won a victory in the first race at the Latvian Grand Prix, the ninth round of the FIM Motocross World Championship 2019, but there was a bit of drama. An accident on the sighting trail left him in a precarious position and his foot was cut by Arminas Jasikonis. The video of that can be seen below. Obviously considering that everything was going well, as he ran and won, but it turns out that he is suffering a lot and went straight to the medical center after the race.

As for the second run he is unknown, as it is, but it is thought that the step that was previously injured is not damaged. The world is waiting to see if there will be a # 84 on the starting line later today.