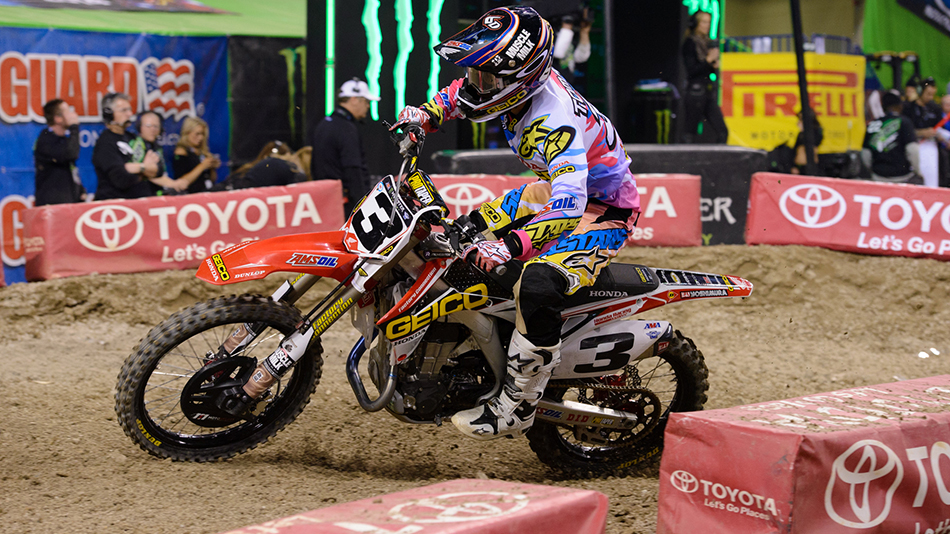 Broc Tickle: “Today was rough until the main. I struggled with the track and flowing throughout the heat race and the semi. We tried different stuff throughout the night, but for the main, we went back to my base set-up. I got off to an okay start, around 10th, and knew I needed to be solid for the full 20 laps. I rode smart and smooth.

Meanwhile guys were making mistakes and I started picking them off. I latched onto RV and stayed right behind him for the rest of the race. Tonight turned around, I got my best 450 main event result after we started the night chasing settings.”

Josh Hill: “Made some big strides today, with my bike, my health and most importantly, my attitude. Coming from dead last all the way up to 9th was good. But the fact that I actually had fun doing it is great.”

Eli Tomac: “It’s good to finally get a podium. You just really had to stay on your toes on all 20 laps of this race because of all the ruts in the course. It would make some of the best guys in the world look like they weren’t all that good, at least that’s how it felt to me.

For me it was a better day all the way around. My season has been pretty rough starting out with a big crash leaving me injured in my very first race. Since then I have just been building and building, trying to get more comfortable on the motorcycle. I realized that I haven’t really been riding like Eli Tomac would. I’m coming out of my shell a little bit.”

Wil Hahn: “It really was an awesome day even if the finish doesn’t really reflect it. I was fast from the beginning, all day and every run. The main feature started off good, but I just dumped the bike about five laps in. I fell over and it took me a while to get my bike started back up. I had to charge back through the field to get the finishing spot I ended up with. I’m just frustrated about falling during the main event. I really felt like I deserved to be on the podium tonight. However, I am happy with my progress, with a faster than usual weekend for myself.”

Justin Bogle: “The start was not good at all for me. The track was extremely rough and is by far one of the toughest Supercross courses I have ever ridden on in my life. All of the ruts caused a lot of competitors to really make some costly mistakes, which allowed me to capitalize and really ride like myself. My main goal is to be fighting for that championship at the end of it all. But that’s only going to happen by me getting out there and really battling hard for these wins. All in all, this is definitely a step in the right direction for myself and the team.”

Matt Bisceglia: “It’s not ideally where I wanted to be or where I wanted to get my first real win. But I was happy to get out of it, rip the holeshot, and grab the win. It allowed me to put down some really great laps before the main event. The bikes are really running amazing right now. I really thought I had a chance to get on the podium tonight, but the bike was just too tight as the laps wound down. Overall, I am happy. This gives me something to build off of.”

James Stewart: “I was right there in, I think, a top-five start and then, boom, I was on the ground. Everything was all twisted up – I tried to fix my handlebars as good as I could, but they were still pretty bent – and I had to try to get back. I just fought my way up, and for the first half of the race, I was struggling.

Then everybody started coming back and I was able to catch up to seventh. Obviously, it wasn’t what we wanted but I did everything I could. I’m all right, I’m healthy and I’m looking forward to going to Daytona and racing in a Florida town. I feel good, I feel very fast and super-confident, and we’ll get it next weekend.”

Ryan Dungey: “This win was a long time coming. It feels so good to finally be on the top step. The track was really tough tonight. It was very soft and technical with a lot of big ruts. We are only halfway into the season and I’m finally gaining some points toward the championship. My goal is to remain consistent as you never know what can happen with eight rounds remaining. I want to give a big thanks to the entire Red Bull KTM Factory Team for their hard work.”

Ken Roczen: “I hit the ground pretty hard after my crash off the start when I got caught-up with Villopoto. I pushed hard for the next few laps, but then I cased a triple in a rhythm section which sent me flying over the bars. I feel really beat up and am disappointed to not finish the race but am thankful I am okay and will be back to race Daytona.”

Adam Cianciarulo: “The track tonight was gnarly. It was survival out there and I was lucky to keep it in control for most of the race. I got a great start and that’s what made the difference. I wasn’t sure when we walked the track if it [the quad] was doable or not. But once I was out there, it was pretty easy to jumpover the table so I decided to go for it and it worked in my favour.”

Martin Davalos: “Sometimes it’s out of your control. The track got the best of me but we all had to ride the same track and I’m happy I was able to recover and still put my Kawasaki on the podium.”Ryan Villopoto: “The track tonight was extremely difficult. I found myself on the ground but if you’re going to be on the ground it makes it better when the rider you’re in the points battle with is there as well. We ended up extending our points lead and we’re looking forward to Daytona next week.”

Blake Baggett: “We took a lot of time to practice starts this week. “I felt really confident in them but we got pinched off the line and I had to shut off. I know with a good start I can win one of these. We’ll stay focused and look forward to next week.

Dean Wilson: “I wanted more from myself but it’s a good start. I feel really comfortable on the bike already and I know with time I’ll continue to improve.”

Ivan Tedesco: “Crazy night for me. Track was super gnarly and I struggled all day. I ended up in the LCQ  and on the start got sucked up in another bike. That ended my night. I feel lucky to have walked away unscathed.”

Cole Thompson: “Finished 9th place tonight. Tricky track with lots of lines, made for tough racing. I stayed on two wheels but couldn’t make the passes happen quick enough. On to Daytona now, looking forward to another week of hard work and putting in a strong finish next weekend.”