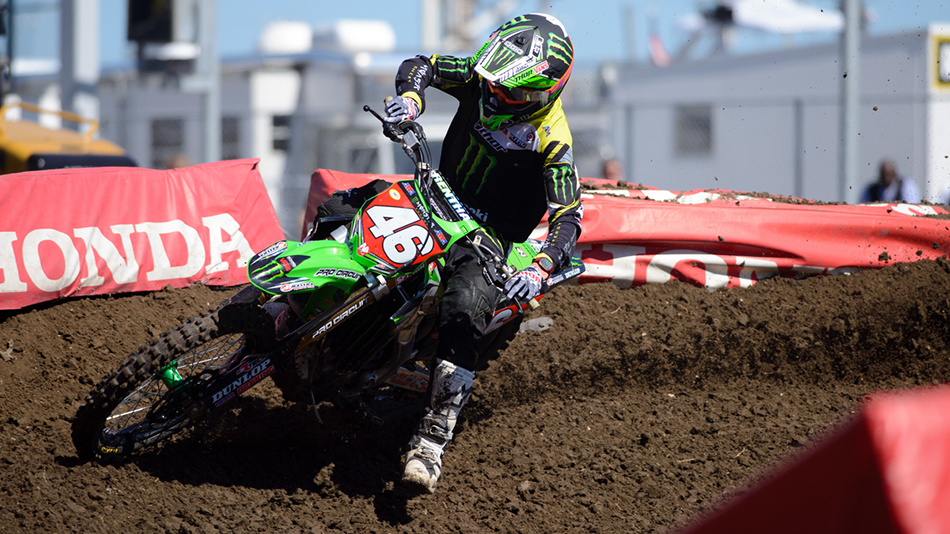 Ryan Dungey: “They did quite a bit of work to help the track, but it was still really tough. I spent a lot of time trying to get around Wilson tonight but was finally able to make the pass. I’m glad to be back on the podium.”

Ken Roczen: “I had to fight my way through the pack tonight. It was a lot of work but the track was actually pretty fun and I am really happy with a second place finish.”

James Stewart: “Daytona was not good, as far as results go. I came around the first corner and a rider was down. I swerved out of the way but his handlebar caught my header pipe. I didn’t know what the problem was so I rode about a lap. I thought my bike was blowing up so I pulled into the pits and my Yoshimura Suzuki guys saw the header pipe was smashed in. They fixed it and I got back on and I rode really, really good. Fitness-wise, I felt unbelievable. This might be the best ride I’ve had all year but I finished 18th. There was just nothing I could do; these things happen. But overall I feel good and I feel confident. All we can do at this point is win some races and make some things happen. Now I’m looking forward to Detroit and getting back to winning.”

Ryan Villopoto: “Daytona is always a little special. The track is always one of the most difficult we race on all year. Tonight the dirtwas softer than it usually is, which made for some big ruts and made it a little difficult.”

Blake Baggett: “Tonight was a good race for me. There is something about racing at Daytona that I really like, I wish we had more races here. The track was difficult but I knew I had the speed to win tonight.”

Adam Cianciarulo: “I was able to get out of the gate decent and tried to makea move super early in that first corner, but it didn’t quite work out for me. I just tried to get around Martin then tried to ride consistent laps, because obviously it’s Daytona and a really tough track. I tried to ride smart. Blake had everyone tonight so I wanted to get as many points as possible.”

Dean Wilson: “Tonight is a good start for how I want to ride in the 450SX class. I feel really comfortable on the bike and to get the heatrace win felt really good. Riding up front with these guys is tough but it feltreally good to be up there and I want to be up there next week.”

Ivan Tedesco: “Rough Weekend for me. Went down in the final practice and hit my head and smashed my finger. Decided not to race because I was feeling a little foggy. I hope to rebound next week in Detroit.”

Cole Thompson: “Daytona was an up and down night for me. I felt good in my heat race and finished 3rd. The main event I crashed in the first turn and had to work my way back up from last to finish 13th. I caught up to a pack of riders at the end but ran short on laps. Definitely not where I want to be finishing, I just need to keep working hard during the week and make it all come together next weekend.”

Broc Tickle: “The track was brutal. It was really demanding and I knew the Main was going to be about being consistent and hitting your marks. I started around 10th on the first lap, but I rode my lines and passed a couple of people early to get into 7th. When Malcolm Stewart and Justin Barcia came together and went down, I went up into 5th”

Josh Hill: “Crashes and run ins with tuff blocks hampered my night. I rode great, but the black cloud just seemed to follow me to Daytona. Looking forward to Detroit were I want to put the Soaring Eagle Suzuki on the box in front of our great sponsors.”