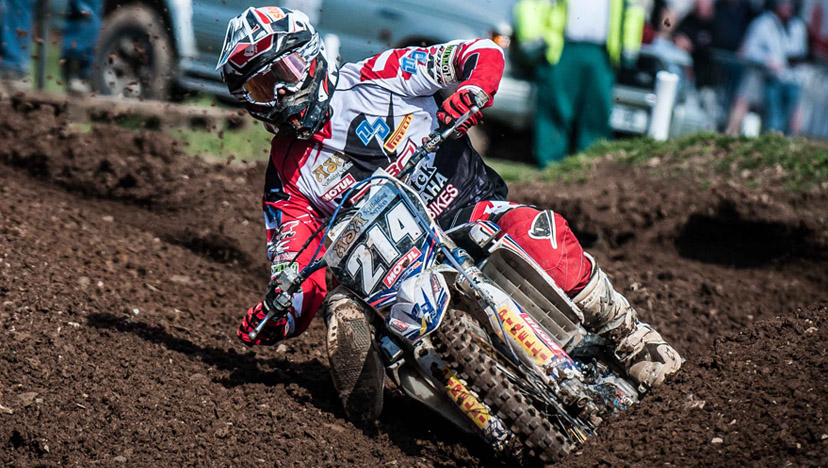 Under the Radar: Landrake

The opening round of the 2014 Maxxis British Championship generated a lot of hype, as you would expect. However, a handful of guys that had strong rides went unnoticed, because of this. So, with in mind, I elected to put the spotlight on four of the MX2 riders that surely left the season opener very happy.

James Dunn: James Dunn ended up in twenty-fifth in the first qualifying session, which was obviously worrying – he is expected to be much, much higher up than that! Fortunately, Landrake has a fair start, so gate pick was not as crucial as it is at most other tracks on the schedule. Dunn had a great start in moto one, as he was second on lap one. Although he had some fast competition nipping at his heels, he managed to hold that position for seven laps.

Although both Mel Pocock and Steven Lenoir eventually found their way around James, it was clear that he possessed the speed required to battle it out at the front. After all, he had the second fastest lap of the race! In the final two motos, Dunn had a ninth and eighth, which was basically where he started. Again, his speed indicated that he should be closer to the top five, but Landrake was extremely tough to pass on, as there was just one good line.

Overall, a sixth was a great result for Dunn; it was one of the best results that he has had in the series. James was certainly an underdog going into round one. However, everyone will be watching intently now to see how he performs in the coming weeks, as he seemingly has the potential to be a podium contender.

Lewis Trickett: In 2013, Lewis Trickett had an impressive season, where he showed some speed. However, the MBO Sport Yamaha rider looks like a different guy this year – he has seemingly made huge gains in the off-season. Whereas last year his best finish was an eighth, Lewis managed to come from outside of the top ten to finish seventh in race two, despite the fact that the MX2 class is stacked with talent. Trickett had a similar ride in moto one, as he had a mediocre start, again, but worked his way around a handful of guys to grab a ninth.

It was in the third and final MX2 encounter that he really shined, as he finished inside of the top five after finally grabbing a good start. On paper it seems like a fairly uneventful ride, as he started in fifth, and finished there. But, he was just five seconds down on the winner at the finish, and had to deal with pressure from all directions. Trickett showed a lot of composure to stay strong, and hold on for his best result in the Maxxis British Championship.

Jason Dougan: Honestly, I was skeptical when it was revealed that Jason Dougan was going to drop down to MX2 this year. After all, he has been on the bigger bike for a long time, and the style of racing is very different in MX2. But Dougan adapted well, and exceeded my expectations! I definitely did not think that he would be at the sharp end of the field.

Admittedly, his fitness wasn’t where it needed to be, as he seemingly faded each time. But he had the speed, which is the hardest part to acquire! The second moto was undoubtedly the best for him, as he passed Pocock and ran second early on. In the closing stages he fell back a little bit, but he finished fourth, which was still a very impressive ride. In race three, he had a poor start, as he ended lap one in eighteenth. However, he still managed to finish tenth.

Dougan clearly has the speed to run up front, and play the role of a spoiler. But, he has struggled to put together a full season in the past. So whether he will be able to do this over the course of an entire season remains to be seen. But, he must be feeling quite confident following Landrake!

Ben Watson: Following his ride at the Hawkstone International, I was very excited to see how Ben Watson was going to fare in the Maxxis British Championship this year. Well, Ben once again exceeded the expectations of most, as he finished third in moto two, following a great ride. It was quite clear that the younger Watson brother has the speed to contend; he was all over Mel Pocock in the closing stages. Ben thoroughly deserved that moto podium.

Although his results in the other two motos may not seem like much, he still put in some great rides to salvage a twenty-seventh (in race one) and a twentieth (in race three). Unfortunately, some falls hindered him, but when working his way through the field he had some brilliant lines. Ben is a very technical rider, evidently; it was great to watch.

Honestly, I expect Ben to make many more trips to the podium this season; he is only going to get stronger. In fact, Lyng could be where he really breaks through. After all, sand is where he is at his strongest.