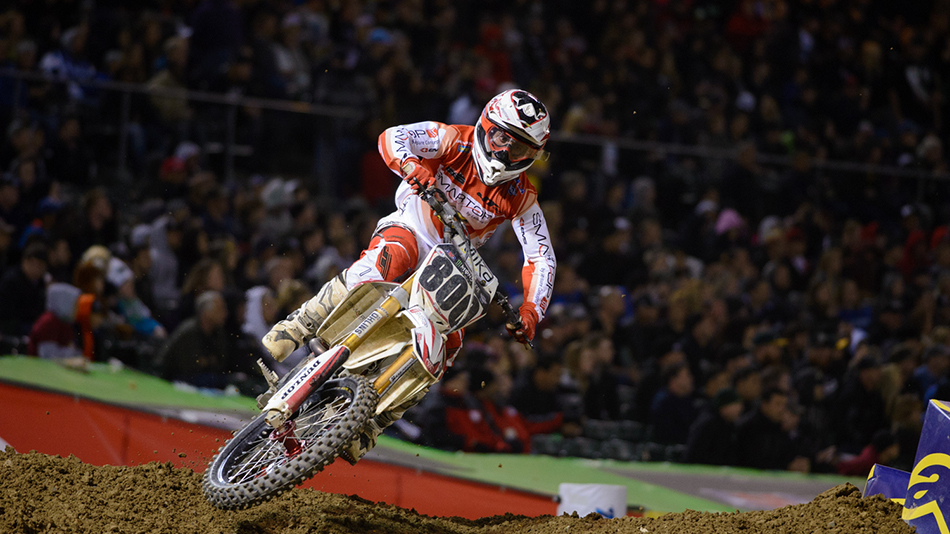 Under the Radar: Indianapolis

The 2014 Monster Energy Supercross season is at a pivotal point now, as we have hit the halfway point and the contenders are starting to fall by the wayside. However, there are some guys that have only just hit their peak – let’s take a look at two of those riders in this column.

Matt Bisceglia has gone unnoticed in the 250SX East series thus far, in my opinion, as many other riders have hogged the headlines. Truthfully, the Geico Honda rider had not done anything to warrant attention, prior to Indianapolis, but that all changed on Saturday night. Bisceglia finished an impressive fourth, which came out of nowhere, as he had really struggled at the first two rounds. In total, Matt had just three points to his name, following Arlington and Atlanta.

However, the poor points haul was not the result of a lack of ability on his part, evidently. In Arlington (the first round) his back brake gave out on him on the parade lap, which made it very difficult for him to tackle the challenging circuit. Atlanta was much worse, as he crashed twice in the main event, and had to pull out when he had the wind knocked out of him – he completed just four laps.

Eventually, he had to have a bit of luck – that happened in Indianapolis, which must have been a huge relief for him and the Geico Honda team. Perhaps he excelled because of the broken down track? Maybe it was because the pressure that came with his first few races was off of his shoulders? Whatever the reason was, he looked like a different rider. In fact, he actually sat in second at one point, so there is podium potential within him – it is bound to come, eventually.

Mike Alessi has had some great rides, in recent weeks, but they have been overshadowed by some of the controversy that he has inflicted on himself. Although it is a shame, he has no one else to blame but himself; no one forced  him to t-bone Tickle at a high speed! Anyway, after a very tough week (where he received threats from fans, among other things) it was good to see that he put it behind him, and managed to record one of his best rides in quite sometime, although the result did not materialise.

It was not surprising to see the MotoConcepts rider excel on the extremely rutty track, as it shared some characteristics with an outdoor track, which is Mike’s forte. It seemed like all of the stars were aligning, as he seemed set to achieve his first 450SX podium since Indianapolis in 2009. Even Eli Tomac admitted after the race that Mike was running the pace needed in order to finish second, and that it would have been a tough race if Alessi not gone down.

But, he did. Like it did to so many others, the track reached up and bit Mike Alessi on lap thirteen, which put an end to his podium fight. However, there are a lot of positives that he can extract going into Daytona, which will be another event that plays to his strengths. Alessi has had some great rides, recently, and has proven to be a top five contender when things go his way. So, would it really be surprising to see him up front again in Daytona?