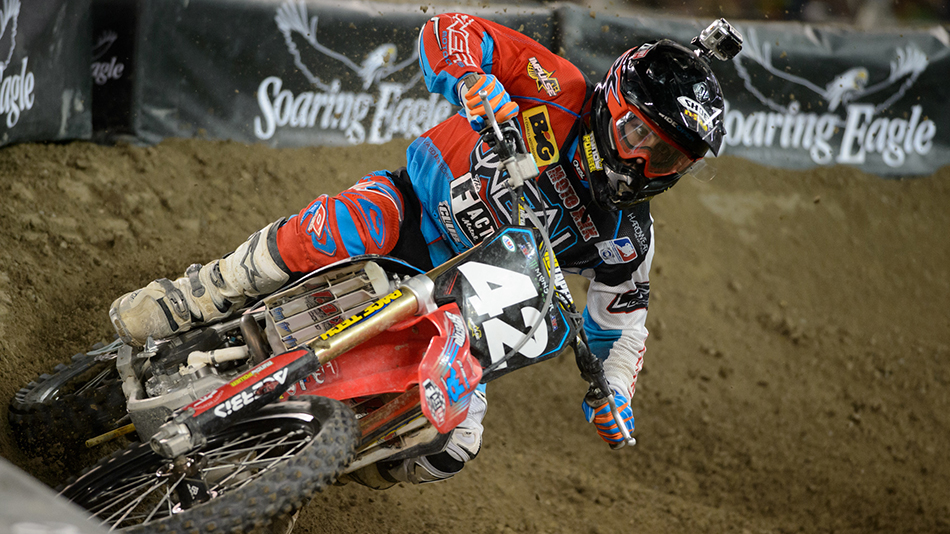 Under the Radar: East Rutherford

Vince Friese (250SX): Vince Friese is a polarising character, because of his actions on and off of the track. It seems as though a lot of people choose to overlook his great results, because of this. But, no one can ignore the podium finish that Friese garnered at East Rutherford – it was certainly the best ride of his career.

Vince has finished in fourth place multiple times, now, but East Rutherford was his first visit to the podium, so it was obviously a memorable event for him. It certainly was not gifted to him, too, as he was actually in the thick of the battle for the lead for a little while. Honestly, I’m not too surprised. Now, that may seem a little weird, but with the very depleted field, it seemed inevitable that he would jump up onto the podium at some point.

Potentially, he could finish even higher up in Las Vegas. Justin Bogle may ride conservatively, in an attempt to lock up the east coast title, which will open the door for a first-time winner. I see no reason why Vince cannot be that guy – he has the speed, and he is a brilliant starter. There is going to be a lot on the line for Friese at the finale, also; he is currently tied for third in the standings. One of the riders that he is tied with [Blake Baggett] is planning to make his return this weekend, so they will both be going all out to secure the spot, undoubtedly.

Jimmy Decotis (250SX): Jimmy Decotis has not been spectacular this year, to be honest – he has not done anything to really grab our attention. But, he stepped up in East Rutherford, as he was a factor in the race for the lead for the first time. This was his home race, so, his heat race win was very popular, as you would expect. Decotis was in a great position to win in the main, but an incident with Matt Bisceglia left him on the ground, and out of the running.

Although the end result (a ninth) wasn’t what he would have wanted, the fact that he ran up front a lot would have done wonders for his confidence heading into Las Vegas. Jimmy could end up on the podium at the finale, it would not be surprising, but everything would have to go his way.

Alex Martin (250SX): Alex Martin certainly raised his game in East Rutherford; he surely saw that there was an opportunity for him to grab a career-best finish. It looked like both Martin brothers could end up on the podium at one point, as Alex sat in fourth. However, he fell on lap eleven, and slipped down the field – he eventually finished eighth.

In my opinion, Alex thrived because of the sloppy conditions, so it is unlikely that he is going to be in the mix of the podium fight at the Vegas finale. Martin is one of the shortest guys in the class, so he struggles with deep whoops. However, I am sure that the sloppy New Jersey conditions would have helped the older Martin brother, as the speed was not as high.