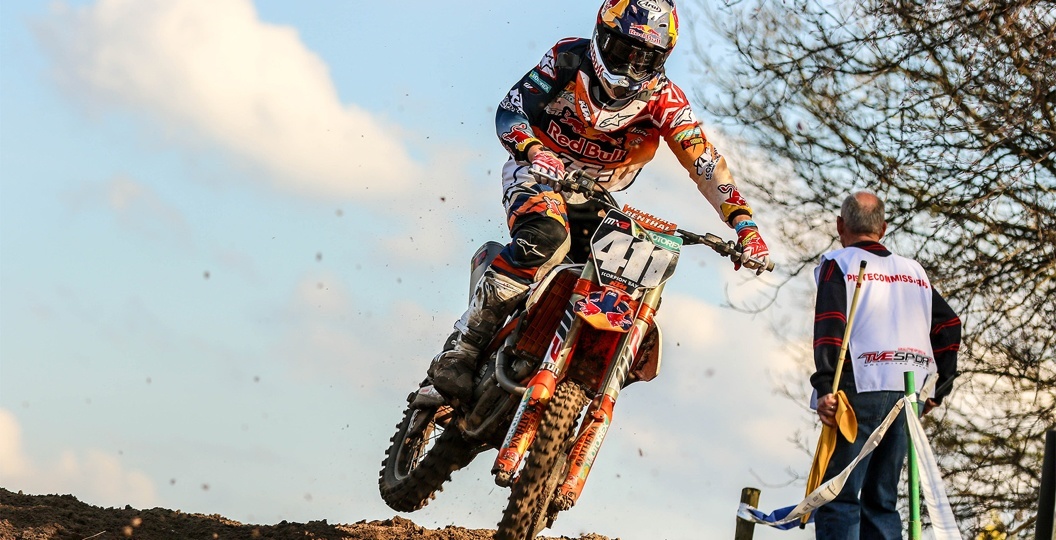 For the forty-sixth time running, the organising AMC Wuustwezel club brought some of the world’s finest riders together on a compact, slightly old-school track just outside of the village of Wuustwezel today. While the rest of Flanders went bananas over the legendary Tour of Flanders, a jolly crowd of around two thousand lined the Molenbergen circuit.

The first highlight of the day was the Superpole. Max Nagl edged out Wilvo Virus Performance KTM’s Shaun Simpson in the combined MX1/MX2 qualifying shootout. Pauls Jonass, long in the hot seat during this Superpole, took third ahead of Tanel Leok and Davy Pootjes. However, the most remarkable story of the day up to that point was another comeback for former youth, world and European champion Dennis ‘Crusty’ Verbruggen.

Verbruggen, twenty-eight, not only left the GP scene in 2010, he only recently started riding again. Nevertheless, his naturally ability just shines through on tracks like this. The Belgian cult hero posted the second time in MX2 qualifying on a stock YZ250F. We all love a great underdog story and we were keen to see what Dennis could muster up in the races.

Taking the holeshot in the first MX2 moto, Pauls Jonass took control and led the race from start to finish. Surprisingly EMX250 star Josiah Natzke was the runner-up in the first few laps. The inexperienced Kiwi made a mistake on lap five, however, allowing Brent van Doninck and Bas Vaessen through. Van Doninck put the hammer down with seven minutes to go. Although Brent circulated more than four seconds per lap quicker than Jonass, his push came too late; he crossed the line second and on the rear wheel of the eventual victor. After a bad start Anstie had climbed up from twelfth to third, with Suzuki World MX2 rider Bas Vaessen in fourth. Conrad Mewse was tenth.

Both Rockstar Energy Husqvarna riders diced for the holeshot in the first MX1 race. It made for cool pictures to see Nagl and Charlier upfront together, but this lasted exactly one hundred metres. On familiar turf, Shaun Simpson was not to be denied. Simpson handily moved into the lead, followed by the driven Tanel Leok. To see veteran Leok pushing his standard KTM to pressure Simpson provided plenty of entertainment. Shaun, unfazed, didn’t flinch and it was Leok who made the error first. Just like his countryman Van Doninck, Kevin Strijbos launched a late assault. Strijbos crawled up to the rear fender of Simpson, but Shaun prevailed.

Jonass simply repeated his performance of race one after the break. The Latvian confirmed the pecking order you would expect in a race like this. That’s not to say this was a boring procession, however. Quite the contrary! Behind Jonass an elite group formed; Pootjes, Anstie, Mewse, Vaessen and van Doninck gave chase. Anstie felt a bit more comfortable and proved to be the strongest of the group. Hampered by a damaged rear brake in heat one, Pootjes rode a lot better too. The ambitious, young Dutchman is still not one hundred percent after his rib and shoulder injury, but he’s making progress.

With a bunch of hungry wolves ahead of him, van Doninck found it hard to make headway. He was clearly pushing, but couldn’t make a move on Vaessen. Towards the end of the race, the Kemea Yamaha rider hit the deck and dislocated his hip. The full extent of his injury wasn’t confirmed at the time of our report, but it was a nasty tumble. Oh, are you wondering what happened to Dennis Verbruggen? He finished thirteenth overall, so let’s see where he goes from here.

The decisive second MX1 moto again started well for Husqvarna. Christophe Charlier grabbed the holeshot with Leok, Nagl and Simpson in tow. When Shaun stalled his engine on the opening lap, he was immediately knocked back to thirty-sixth thus minimizing his chances of repeating his 2015 Wuustwezel victory. Upfront things got heated, as Nagl took command from teammate Charlier. Strijbos, once again handicapped by a mediocre start, first passed Leok and then Charlier. Born and raised in Wuustwezel, home favourite Strijbos gave Nagl a run for his money – the gap was way too big though.

Tanel Leok soldiered on to finish third, ahead of Charlier and Yentel Martens. Simpson’s flapping jersey, ripped open by a competitor’s lever whilst standing still, gave him the image of a superhero. Coming through traffic on a tight track like this is never easy and, with the twenty minute plus one lap race format, the Wilvo Virus Performance KTM rider had to settle for eleventh. Max Nagl only seemed mildly interested to win in race one, but for sure his victory fits the momentum the German has been carrying since Valkenswaard. In typical fashion Max put his blistering starts to good use.

While happy people have no stories, Strijbos’ camp certainly know what’s currently missing. “The riding is going well, but we just seem unable to get that start. Believe me it’s not for a lack of trying,” said Kevin. “We’ve already tried a lot so that’s a bit frustrating. Winning in my home village would have been cool, but you had to use your head as well. The track was littered with strange bumps and it’s easy to make a mistake, you saw that with van Doninck. I hope he’s okay!”

Although the podium eluded him, Shaun Simpson was quietly confident and upbeat as ever after the race. “I love this place and it’s always cool to race here! It would have been better to leave with a second win, but I’m happy to feel better again. I’m starting to feel like my old self after the viral infection I had. It’s taken me a while to bounce back from that, but next weekend I should be completely fine.”