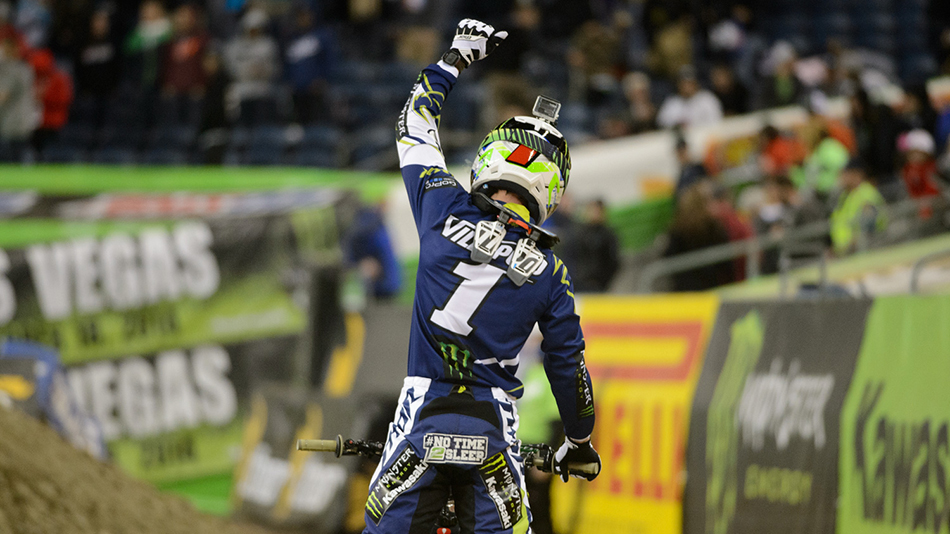 SEATTLE (April 12, 2014) – In front of 53,927 fans inside CenturyLink Field, Seattle-area native Ryan Villopoto grabbed his fifth win of the 2014 Monster Energy AMA Supercross, an FIM World Championship, season during the 15th stop of the 17-race championship tonight. In the penultimate race of the Western Regional 250SX Class Championship, Troy Lee Designs/Lucas Oil Honda’s Cole Seely led every lap of the Main Event to capture his second win of the season.

For the second straight week, Villopoto had to earn his way into the 450SX Class Main Event through the Semi and once again was able to pilot his Monster Energy Kawasaki to the Nuclear Cowboyz® Holeshot Award when the gates dropped on the night’s final 20-lap race. Red Bull KTM’s Ryan Dungey followed in second with BTO Sports/FLY Racing KTM’s Andrew Short in third. Team Yoshimura Suzuki’s James Stewart asserted himself into fifth.

By the time the field came around to complete the opening lap Villopoto was followed by Dungey and Stewart, pitting the top three riders in the championship in a battle for the win. Stewart made the pass on Dungey for second on Lap 3 and attempted to track down the lead. Villopoto held a comfortable margin from the get go and was able to extend it throughout the race, ultimately posting a wire-to-wire effort to earn just his second career win at his hometown race in six years.

“I don’t think I’ve ever raced in front of a crowd cheering me on this loud. It’s tough to race at home and in the past I haven’t been that stellar here, so to have a race like that is awesome,” said Villopoto, who’s first career 450SX Class win came in Seattle during his 2009 rookie season. “With [James Stewart] and [Ryan Dungey] standing up here next to me, getting a win is huge. I’m not thinking about the championship right now, but it does feel good to have an opportunity to wrap up the title in New York in a couple weeks.”

Stewart and Dungey maintained their podium positions throughout the race and finished in second and third, respectively, ultimately preventing Villopoto from wrapping up his fourth consecutive championship. With a 48-point lead in the standings, Villopoto can clinch the title at the next race, which will take place at MetLife Stadium for the first-time ever next weekend.

Monster Energy/Pro Circuit/Kawasaki’s Dean Wilson started the Western Regional 250SX Class Main Event by grabbing the Nuclear Cowboyz Holeshot Award with Seely close behind. Seely maintained the pressure on Wilson and was able to make the pass for the lead coming to the line to complete the first lap. Wilson didn’t lose much ground on Seely and was within striking distance throughout the opening laps until he lost traction and went down on Lap 4, dropping to fifth. Wilson’s misfortune allowed Seely to open a gap on the field that he would ultimately maintain for the remainder of the race.

Behind Seely, Monster Energy/Pro Circuit/Kawasaki’s Justin Hill and Rockstar Energy Racing’s Jason Anderson engaged in a spirited battle for second. The duo traded spots on multiple occasions with Anderson, the championship leader, crashing and going off the track on separate occasions. Despite his misfortune, Anderson was able to continue the fight with Hill for second and made the pass stick on Lap 12.

Seely’s win helped him gain three points on Anderson, who finished second, to close to within eight points in the championships standings with one race remaining in the Western Regional Championship.

“I’m just trying to stay alive in the points hunt,” said Seely, who won in Seattle in 2011. “I’ve been solid and he [Jason Anderson] has been solid. I got off to good start then Dean [Wilson] made a mistake and I capitalized. We were able to put together 15 solid laps. This is where I need to be, so I’m pumped. I’m not thinking about the points. Whatever happens [in the championship] happens. It’s been a fun year.”

Hill rounded out the podium in third while Wilson bounced back from his crash to finish fourth. The Western Regional 250SX Class Championship will next race at the 2014 season finale from Las Vegas on May 3.

Monster Energy Supercross will take its lone break of the 2014 season next weekend in observance of Easter before returning to action for the penultimate race of the championship on Saturday, April 26. The sport will make its first visit to the New York area since 1991 as MetLife Stadium, in East Rutherford, N.J., will host its inaugural race. Live broadcast coverage on FOX Sports 2 begins at 7:30 p.m. ET, followed by tape-delayed coverage on CBS on Sunday, April 27, beginning at 1:00 p.m. ET.