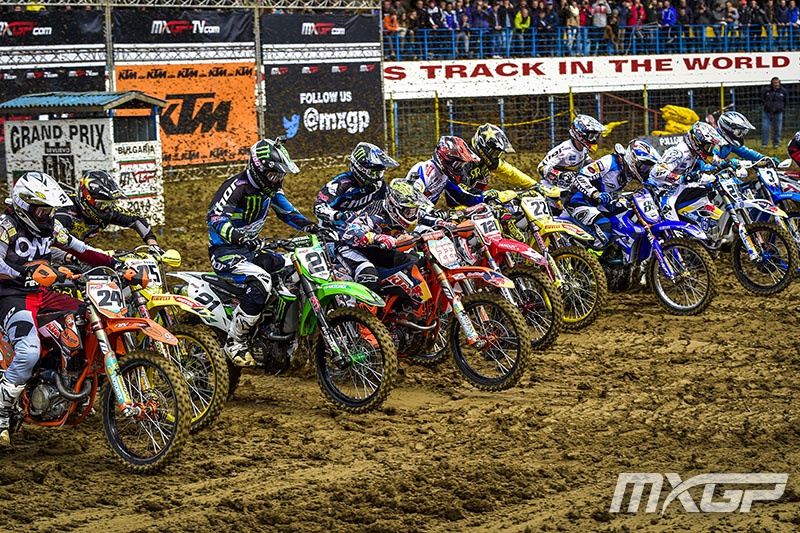 SEVLIEVO (Bulgaria), 20 April 2014 – Unpredictability is what makes motocross the spectacle it is, and the ability to adapt to diverse situations is what makes the athletes of MXGP and MX2 so admirable. At round five of the FIM Motocross World Championship in Sevlievo, Bulgaria, riders were put to the ultimate test. Mud, ruts and clay set the scene in the morning, but come afternoon, the skies had opened up and the rain set in. Despite extremely difficult conditions, when the chequered flag waved for the final time today, it was all about the two FIM Motocross World Champions Antonio Cairoli and Jeffrey Herlings.

Red Bull KTM Factory Racing’s Antonio Cairoli finally broke the curse of Bulgaria, winning in Sevlievo for the first time since his MX2 days back in 2007. Ever modest, the seven-time world champion admitted it wasn’t easy, “In race one, Gautier was riding really fast and in race two the track was really difficult, but I tried to ride smooth. I did make some small mistakes near the end but I had an ok lead so it was ok.”

Monster Energy Kawasaki Racing Team’s Gautier Paulin mixed a brilliant race with an average one for second overall. In race one, the flying Frenchman put an amazing pass on the reigning world champion Antonio Cairoli when he railed around the outside and scrubbed down the hill to take over the lead. Despite finishing race one with a convincing win, the best he could do in the treacherous conditions of race two was fourth, but was still satisfied with his riding saying, “I am ok with this result, my riding was good so I am happy”.

Yamaha Factory Racing’s Jeremy Van Horebeek continues his climb up the championship ladder as he takes home yet another podium with third overall. After taking home fourth in race one, the Belgian proved his worth in race two when he took the gnarly conditions with a grain of salt, finishing second, a remarkable three seconds behind the seven-time world champ Antonio Cairoli.

Rockstar Energy Suzuki World’s dynamic duo Clement Desalle and Kevin Strijbos both rounded out the weekend with a fourth and a third place finish in their races for fourth equal. Going up against the consistency of fellow Belgian Jeremy Van Horebeek, Desalle drops four points to his countryman and is now tied with the Yamaha rider for second overall in the championship standings.

Meanwhile yesterday’s top qualifier Team HRC’s Max Nagl didn’t have the best day in the office. After going down early in race one, the German put in an outstanding ride, battling all the way from last place to salvage ninth. In the slop of race two, Nagl, in a battle for fifth, wedged his bike between the wheel and fender of Shaun Simpson. After finally untangling and re-grouping he managed to move back up to sixth, but a last lap fault ended up dropping him back to ninth meaning he would have to settle for a disappointing ninth overall.

After arm-pump plagued his qualifying heat race, Red Bull KTM Factory Racing’s Jeffrey Herlingscame out all guns blazing today in Sevlievo. Although winning race one proved no easy feat, the young Dutch sensation is ever a fighter and fought right to the end to claim the win in both races for his second perfect score of the season.

While the result for Team CLS Kawasaki Monster Energy’s Arnaud Tonus was not quite what he wanted, his impressive racing is what caught the attention of many. The flamboyant Swiss was throwing big scrubs as he stayed in contention for the win for the entire duration of both races. After taking two second place finishes behind the two-time world champion Jeffrey Herlings, Tonus remains the championship points leader, four points clear of Jeffrey Herlings. Tonus said in the press conference, “It was really a balance between pushing and trying to stay on two wheels, so it was really difficult, but I really wanted to stay on two wheels and I did that so I am happy.”

Red Bull KTM Factory Racing’s Jordi Tixier hasn’t had the greatest start to the season, but after his solid set of thirds, even despite the fact he ditched his goggles early in race two, the Frenchman looks to be turning things around as he seals the deal on his first podium finish of the season. “This season has not gone really good, I have had bad starts and just put too much pressure on myself, which is not the best, but today I came in not expecting to be on the podium because I have broken a little bone in my hand and now here I am, so I am really happy.”

Even though CLS Kawasaki Monster Energy’s Dylan Ferrandis found himself in the thick of the battle for a podium finish, the stylish Frenchman made a few too many errors this weekend, which in turn landed him in fourth over all with two consistent fourth place finishes.

Rounding out the top five Wilvo Nestaan Husqvarna Factory Racing’s Romain Febvre was forced to settle for fifth, after a tangle with a lapped rider saw him loose his easy third place finish in race two.

The local hero Kemea Yamaha Racing’s Petar Petrov was one of the most impressive performers of the day. The friendly Bulgarian had all the fans on their feet as he carved his way from last place in race one to a remarkable eighth and then placed the cherry on top with his seasons best place finish in race two, sixth, for sixth overall.