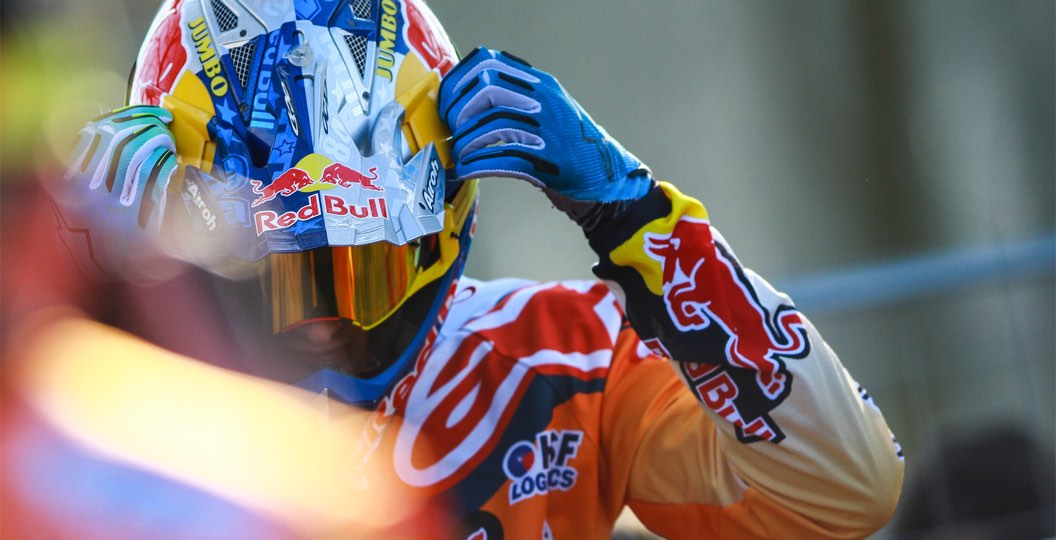 Does Jeffrey Herlings remember how motocross races were once run in the sixties? Not from his own experience we would assume, because he’s only twenty-one, not Benjamin Button, a man on a mission and nostalgia is not exactly mission-critical. So, after Hawkstone Park, Qatar, Suphan Buri and Axel, it was win number five for the double MX2 world champion.

Even some of the bigger Belgian races do offer a flashback to a time when racing was more of an improvised affair. The opening round of this season’s Belgian Motocross Championship was held in Moerbeke on a temporary track where only weeks before there had been a flat field. Herlings didn’t moan (too much) about the nature of the course, he simply got on with the job at hand and did it in style. Rockstar Energy Husqvarna rider Max Nagl grabbed the holeshot three times, but Jeffrey showed who’s boss on soft soil.

The only one to reach average lap speeds of over 60 km/h (ouch!), Herlings was simply in a league of his own in the three twenty minute plus one lap sprints. In contrast to Herlings 1.0, the reborn sand master has grown more patient. Each time he gave Nagl a bit of space before taking control. That’s race craft, kids.

This didn’t mean that Moerbeke was boring. Surprisingly enough Kemea Yamaha’s YZ250F-mounted Brent Van Doninck gave Max Nagl hell. The former protégé of Stefan Everts would’ve beaten Nagl at least once, if it wasn’t for goggle issues or a last lap error in the final moto. Keep an eye on Van Doninck, as he’s going from strength to strength after he bagged his career-first podium in Assen last season. It seems the twenty-year old has made good progress again this winter under his new coach/mentor Jacky Vimond. If Brent can keep his cool he’s in for an overall podium in Valkenswaard.

Charlier did win a Belgian round last year in Kester and after a mandatory winter in ‘Lommelwood’ the IceOne rider is getting more and more comfortable in the soft stuff. CC23 finished fourth overall today.

In some ways the Belgian Championship has become the victim of its own former glory. Top riders still command hefty starting fees, but decreasing attendance figures and the restrictions placed by factory teams on their precious talent put the organizing clubs in an uncomfortable ‘grand écart’. This meant that Moerbeke had to do without reigning Belgian Champion Jeremy van Horebeek. Earlier ‘The Jerre’ declared he won’t take part in his domestic series at all.

Admittedly the crew of MC Scheldeland did a fine job to make the best with what they had at their disposal but, unfortunately, races like these will always remain a far cry from modern purpose-built tracks. Kevin Strijbos has become wary of these type of circuits and decided to sit out this round. Add in the injuries of Clément Desalle, Ken De Dycker and Julien Lieber and it’s obvious that the chances of local fans being star struck by Belgian heroes were slim.

EMX300 title challenger Yentel Martens had a great final rehearsal before Valkenswaard, he rounded out the top five. The lanky Belgian, unlucky with a scaphoid fracture last year, is keen to get his revenge. JTech Honda’s Damon Graulus was the second MX2 rider today. After two dismal GPs, the reigning Dutch champ is looking for a break to turn his season around come Valkenswaard.

Not only the lack of homegrown top riders hurt the crowd figures. Sandwiched between the Dutch Masters in Axel last week, next week’s GP and the MCLB amateur federation running an event about two clicks(!) from Moerbeke with much cheaper admission all played a part. About two thousand spectators wasn’t awful, but to Belgian standards not great either.

Great as always in his own modest way was two-time world champ Steve Ramon. Ramon doesn’t carry that blistering speed he once had, yet he remains fascinating to watch. Riding his own pace and expertly judging the terrain, Ramon was putting in a solid performance. Steve, thirty-six, finished eighth overall and seemed to be enjoying himself.

The likeable Kevin Wouts, a former MX3 GP winner in Valkenswaard, surprised many with his strong performance in Hawkstone Park earlier this year. The KTM rider was again unlucky, like in Axel. Due to bike problems he had to borrow a bike from a friend for the final moto. It was Wouts’ best moto of the day with a tenth overall, third among the MX2 riders. Let’s see what Kevin can do next weekend, he might just be one of the outsiders in the super-stacked EMX250 category.

No fun was had by the sidecar heroes either. The Belgian Sidecar Championship was supposed to join the ‘solos’ this weekend. In stark contrast to Herlings’ massive starting fee, the world’s best SMX riders had been told no compensation was possible. No starting fee and no free tickets either. In protest most teams pulled out of the event leaving the organizers no choice but to scrap the race altogether. It was a sad side story to an otherwise well-ran event and thus we will never know if ‘The Bullet’ would have recorded his epic +60km/h laps if the track had been ‘prepped’ by the sidecars. With his current form, Herlings just might have pulled it of.

Well he can count on a rough Eurocircuit next week anyway, with five classes, and from that perspective Moerbeke was a pretty good practice run.