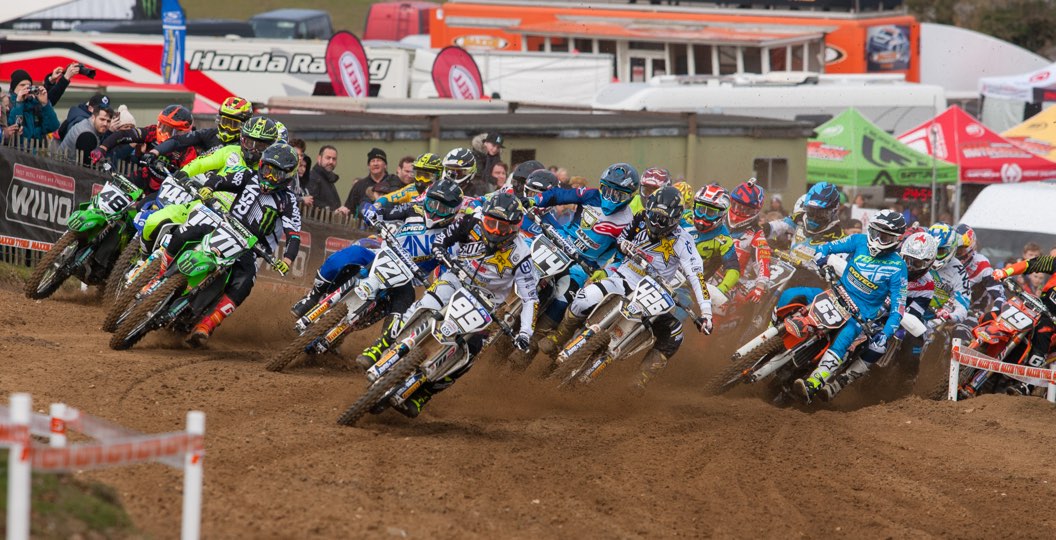 The first round of any series can pose unforeseen problems and complications, hence why the familiar setting of Lyng in Norfolk was a fitting venue to host round one of the 2016 Maxxis British Championship. The crowd, which was a reasonable size, were treated to some great racing, which in turn chucked up a few surprises and storylines that’ll make for great bench-racing in the days that follow the event.

With no Adam Sterry or Vsevolod Brylyakov and the addition of Max Anstie and Conrad Mewse, the MX2 class turned out quite differently to how many people would have predicted. Brylyakov, if you haven’t realised, wasn’t present due to visa issues that stopped him from entering the country. We’ll have more on that later.

Max Anstie used all the power in his Rockstar Energy Husqvarna Factory Racing machine to sweep through turn one in the lead in the first race, with his young teammate Conrad Mewse in tow. That did not change at all through the twenty-five minutes, as Anstie managed a comfortable gap to take the win and maintain his unbeaten record in Britain – that stretches back to the beginning of last year. Mewse put in a phenomenal ride for second, and actually closed up on Max at points, with Martin Barr in third. A pair of title contenders, Ben Watson and Steven Clarke, withdrew with bike issues.

The second MX2 moto was extremely similar to the first, as Anstie and Mewse started first and second and immediately pulled away from the rest of the field. Although Max’s advantage was comfortable, Conrad was again right there for the duration. Steven Clarke and James Cottrell were involved in a fierce battle for third, but that came to an end when the latter withdrew with a bike issue. All Clarke then had to do was maintain his advantage over Ben Watson, which he did. Lewis Tombs rounded out the top five. Brad Todd concluded what was undoubtedly the best day of his career with a sixth, just ahead of James Dunn.

Dunn’s seventh place was poignant, as when paired with his fourth from moto one it put him third overall. Anstie and Mewse were first and second in the overall classification, unsurprisingly, following what was a dominant day for Rockstar Energy Husqvarna Factory Racing. With this being round one, the series standings look exactly the same.

MX1 is undoubtedly the deeper class this year and the highly anticipated duel between Shaun Simpson and Tommy Searle actually created a bit of atmosphere; something that tends to be missing at British events. Searle immediately cut across his rival out the gate in the first moto, but it was actually Steven Lenoir who took the holeshot. An eventful first lap saw Tanel Leok come around in the lead, however, with Simpson and Searle in tow. The latter two leapfrogged Leok a lap later, then an exciting battle ensued. Tommy made quick work of Shaun and then dropped the hammer; he broke away from the field extremely quickly.

When the chequered flag flew, ‘100’ had a nine second advantage at the front after backing it down towards the end. Simpson and Leok rounded out the top three, just as they did in qualifying, with Graeme Irwin in fourth. Irwin was slow to start, but sliced through the top ten towards the end and actually gained two spots on the final lap. Kristian Whatley rounded out the top five.

Tommy Searle started up front in the second moto and never looked back really, as he just ran away with the win. Simpson attempted to give chase, after slotting into second early on, but there was nothing he could do. The reigning champ actually had to deal with immense pressure from Jake Nicholls at the end of the race, but held on to record a brace of second places. Tanel Leok, Kristian Whatley and Graeme Irwin rounded out the top six.

Tommy Searle, Shaun Simpson and Tanel Leok ended the day as the top three overall, which isn’t too surprising. The way that Searle won would caught some off guard though, you would presume, as he made a massive statement.